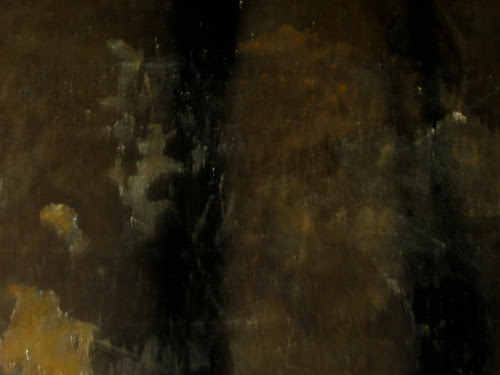 Tim Atkins’s Folklore (Salt, 2008), written in sixty-nine number’d pieces of (mostly) a kind of truncated prose, with a final spout of Nathaniel Hawthorne to end it, begins thus:

Man walks in to sky. Crows, a muttering, didicoy.

Lays his feet in the rain. Tar paper peeling & waters form. His
piss blades. The bramble hedge. Crawls through doors. Feathers
fall over. His black suit. Lies inside. His dark song.

In his heart he. Lifts the car off the farmer and ran. Tossed his
bike in the hedge & wrestles a man down. Ate the flowers with
his bare hands.

Rain & rain from the west and the clouds in the shape.

It’s an skinned down elemental opening worthy of (reminiscent of) Cormac McCarthy (say, of Child of God). It echoes a ballad tradition (that “Where you from boy,” particularly how it becomes a kind of refrain). If not strictly ballad, oral: both by the stutter-speech (relentlessly full-stop’d) and by the trailings-off (“clouds in the shape”) of the unspoken, the interrupt’d (mimicking with accuracy what speech is: a series of incompletions). Here’s (one thinks) a man on the run, hiding out (in a henhouse? a chicken shack?) after some poorly-defined altercation, discover’d. (A diligent reader norteamericano is likely to fetch a lexicon for “didicoy”: a tinker, a gypsy. Likely to shrug at the precise whearabouts of Eardisley. Any reader is likely to suck up air sharply—wince in admiration—at the precision of “His piss blades”—the cut of a stream.)

The “story” proceeds by gists and piths, uncertainties and roundabouts and the music of its language. There is what I read (turning partly to the ramifications of the title) as the easy merger of (or lack of usual distinction between) animal and human. (As early as the second part the “Man” seemingly “Aspires toward dark. // All the quick animals.”) And in the fourth part is seemingly become a fox in that henhouse, or its indistinguishable other:

Steals between the honeycomb wire and breaks their necks
every one. Sees the cold dawn sees it coming up over Bredon’s
cold hill. Halfway up the nostrils and into fox lungs. Climbs it
up and leaves a red stain on the hill side there.

Again the refrain, again the refusal to make a metaphorical jump. (Though, elsewhere: “The clouds make a dog’s face. France. An old man with a pipe.”) There is, too, a woman / animal, and a love story: “Smear her back with soft fruits. Love in its traditional. In a different field. Cider is the fruit of. Making love. // Catches flies between her teeth.” And a child, a mother. And completely mysterious hints at events that one cannot integrate into a single paraphrase, a trajectory (Atkins writes: “Information forks.”) Here, for example is part forty-nine:

Clear water in a glass. Enters the mouth through the ear.

She unpins her leg and leaves it on the Severn. Climbs beneath.

Or how ignore the oddly ritualistic and ineffable passage toward the end (in part sixty-six):

Man puts his knife around the scrotum & cuts off the balls. Its
silver hides. The gold teeth & rings.

Takes a wick of kindling and lays it. Wadding the newspaper
watches the print come off. Damps it down with the fist say
and fires it. Up and over. Smoke from the chimney air. Just like
in the leaves. Over the roads & on, gone. All the smoke crimson
green. Wet arches trained into horseshoes. Drips in the day.
Crumble into nothing. In wind.

Looked for her bones. A day too late to. Listen to her, sing.

She mixes her hair with the man, the man’s footprints dirt &
burns them. Adds the ashes to his food. Says.

Blood does not clot in a cold a cold wind.

I scout’d out Atkins’s Folklore out of admiration for the free (and mighty) translations in Horace (O Books, 2007). Turns out an early version of some of the pieces appear’d in a chapbook titled Folklore 1-25 in 1995. So one suspects the whole is “earlier work.” It is (mostly) less pop-inflect’d, soberer, tighter, more “work’d” than the pieces in Horace (and the few translations of Petrarch I’ve seen—most notably in the recent issue of The Sienese Shredder.) Though: in Folklore, too, against the prelapsarian rural magic-caught world that appears to dominate the tale, Atkins is willing to include any detail, a-chronological, “inappropriate,” or not (see “Summer was. A plastic bag in a tree” or “Glasses of crack, Romany” or the odd catalogue that reads “Meadowfescue. Timothy. Aspirin. On each blade.”)

If there is a nod to orality behind the pieces, it is accompany’d by orality’s larger social (gestural) impulse. See: “At the end of summer pass on knowledge by tongue. & dancing. Her substance. Is this. Apiary.” Drawing against the bee-language of probe and dance. Folklore is wondrously populated by insects, terrifically limn’d: “Thunderflies line the shelf. Like black indians” and “A reel, a mosquito, in my hand” and the end of part thirty-two, where Atkins’s own books (in the final line) seem align’d with a credo of manifest insect-life:

Cockchafers chased under the oaks and the ghost-moths in
meadows. Insects in out of the body.

Folklore. Sonnets. To Repel Ghosts. This and this.

Sense of the rightness and inevitability of “the things of this world”—adding oneself to the pile. There is, too, direct suggestion of Chinese and Japanese traditions put into play (Atkins writes: “Centuries back—that was it—Insects—reading the Poets of The Late T’ang.”) And coming immediately after the “This and this” of the credo: a haiku, fiercely self-sufficient:

In a dish and a green light

I confess I never do put Folklore all together. Its seams, though apparent, are rife with goods—so it hardly matters (“The brain is a delicate wind that surrounds hinge.”) I go to things like the lines toward the end of the book that read “Set out for & came back with. Hours. Is, is, and is. // Water has no answer. // Our great love.” And I put that next to the Hawthorne quote (out of The Marble Faun) that closes Folklore and reads in part “now that life had so much human promise in it, they resolved to go back to their own land; because the years, after all, have a kind of emptiness, when we spend too many of them on a foreign shore” and try to think that that—a sense of dislocation put against an impulverable history (green Albion in song and story) is one of the sources of the book, or one of its “meanings.” Or (another way to say it):

This intermittent. This speaking, is. Handkerchief inside
grains of salt. Blinding. Like a necklace. In the green woods. 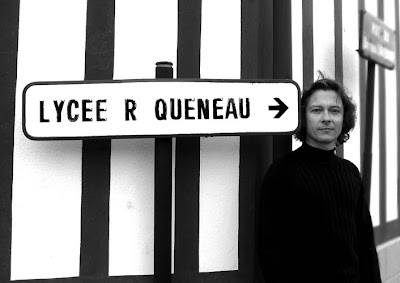 XXXIII
Complacency with its top down:
the added-up hours of

waiting for the wainscoting to
get nail’d in. The mean

time: the canny knack of
the pluvial—call it rain—

to downspout all its roof-
debris down into the cellar.

If there’s an Almighty out
there, there’d better be one

almighty good story to account
for the colossal mess that’s

work’d itself up down here
below, a thing to appease

I release the greasy catch
under the hood and gun

the engine good: go off
in a surfeit of wind.