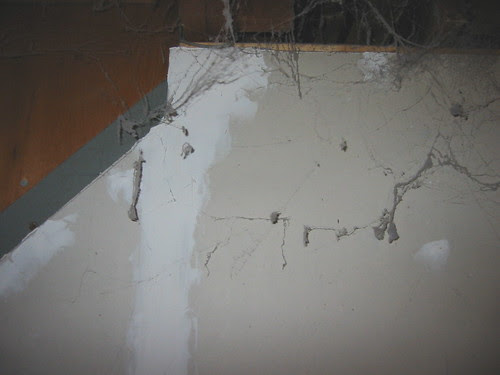 A cold making mischief with my stamina and (probably) with my niggardly little idées moitié-fessées (half-ass’d, and I am just being insufferable about it). I keep wanting to write about Stephen Rodefer, who, de temps en temps in the hothouse atmospheres of various cyber-salons, seems a little jack’d up with self-worth, but whose work in the Jean Calais-pseudonym’d Villon, in the ample new selected call’d Call It Thought (Carcanet, 2008), and in the seventy or so page “devotional” in the recent Chicago Review (including interview, appreciations, assessments, poems, and checklist) all falls down brightly welcome, and necessary. Is it odd that one ought to open the Chicago Review interview to Rodefer’s report, addressing the query “how you got started writing,” and read “At the age of thirteen, in 1953, you can understand how a phrase like ‘Pubic hair crisp as lettuce” might jump out at a not quite pubescent young boy.” Edna St. Vincent Milllay, apparently. And I swear against a bolus of pubic fur, by God, against a pyramidal cache of icebergs drench’d in muffery, that I only ever had opportunity to read St. Vincent Millay’s “Renascence” (and did not “get” it—“three long mountains and a wood”) in high school—though one year later finds me writing “A stunning cunt! Crisp / lettuce!” in an outburst that appear’d (eventually) in Rubbing Torsos under the title of “The Body.” Is it possible to make a bigger contrariety between, though, Edna St. Vincent Millay and John Sinclair? For that is the next thing that, pull’d into my slipstream by the effervescent flights of Rodefer (somewhere he says, “We are charlatans . . . All talkative writers will prattle”), compels. In part, the story of early publishing:

The Knife [publish’d in 1965 by Victor Coleman’s Island Press, a pre-Coach House outfit] got a fairly quick negative review (premature, I think the word was) from Jerry Younkins . . . of the Writers Workshop in Detroit, which Olson had been touting in class as terrific. And / so, being a susceptible, readerly sort, I didn’t publish anything more for eleven years. Though fairly, it must be said, John Sinclair, the WW director and producer of the band MC5, spent much of that time in stir for the possession of a single, possibly planted joint.

Which reminds us: history is a collapse and a heap. The Cass Corridor Artists Workshop John Sinclair a different beast than the Ann Arbor-based White Panther Party John Sinclair of the 1970 Bob Seger song, “Highway Child” (“I’ve seen ’em dumping garbage in my rivers and lakes / I’ve seen ’em send up John Sinclair, you know two joints is all it takes.”). And, in some sense, the MC5’d been replaced by the barely tenable The Up, four of the skinniest-ass’d crank’d-looking long-hair’d white boys one’d see. They seem’d to have two songs: “Smoke Dope,” and “Just Like an Aborigine.” (Or so my sorry recollect goeth.) Okay. Rodefer. It’s hard not to like anybody so thoroughly steep’d in O’Hara. Open Call It Thought nigh anywhere:

The hero like a bandit fond of Sonora
is found sleeping in the arms of his compadres.

Some lips
are in their occasion more
heavenly
by dint of sheer taste.

You will not come this year
not knowing this to be true.

Smarming out (I’d like to say “smegma-ing-up”) the heart-rent final line out of “For the Chinese New Year & for Bill Berkson”—“you will not die not knowing this is true this year.” Follow’d exactly by:

I implore your strong arms
To quit dragging their sharp fingers
Across my upturned face.

Will the maenad who commanded these genitals
To be rent please stand. The silly calf
Gets fucked by the intrepid shepherd.

The countryside taps me on the shoulder
As if to say “You’re just another
Obsessed translator of the Greeks.”

“Nonsence!” I say, “it’s love.”
And spark the amber smile
Of my sheepish heart.

At the age of sixty
I wish to be torn limb from limb
By a gang of indifferent young women.

Both out of the 1978 The Bell Clerk’s Tears Keep Flowing. Echoes of “To the Harbormaster,” of “Today” (“Pearls, / harmonicas, jujubes, aspirins! . . . They’re strong as rocks.”), of “Meditations in an Emergency” (“nostalgia for an innocent past of perverted acts in pastures”). How about something earlier (out of One or Two Love Poems from the White World)?

To every woman he sees he
says where will you be
in six months and they’re
always there—atop
pyramids, by the Eiffel
Tower, sitting
on a mountain, they
are everywhere

The fleet indices of love—“indiscriminate but fleeting”—city life. (The “Preface” to Four Lectures begins: “My program is simple: to surrender to the city and survive its inundation.”) My “thesis” (gaining ground whilst I plow around in the Rodefer oeuvre): he may well be “our” top mimic. (What about the “late” work?) Here: isn’t “Chicago” purely, devotedly, Berriganesque? (for whom it is—“for Ted Berrigan”)

They tell me nothing and I answer well fuck you.
And if I choose to be a plumber it’ll be a husky one.
So if you bet your last dollar on the stupid butcher
Don’t expect me to sympathize at the other end,

As I go down bragging and laughing,
Feeling the pulse in my ribs and waist
As the young man dusts off his mouth
Half naked and sweating and proud to be a hog.

“Feminine marvelous and tough,” no? Though Carl Sandberg raises up one craggy brow like a man stuck to the back of a Buffalo nickel and queries, “Hogs?” Clearly, the minutes spent chasing my galloping nose here—they’re putting me at the distal end of the Rodefer assessment, and appreciation. Meaning, I romp and cavalcade. Consider it a first poke. I’ll go again. Why do I think John F. Kennedy said “vim and vigah,” something need’d, a poise against the sheer unqualify’d effrontery of daily life? Isn’t that Rodefer too?

XLI
Pulpit cajolery, jack-
in-the-pulpit,
sconce cajones amongst
skunk cabbage. Ministry
hankering, that’s it.
A dinge oak-
leaf’d sponginess under
north-turn’d slopes,
snow pierced by
thumb-sized green
spears. A Digger
design for turning
back tyranny: piling
rude-cut brambles
and scut wood
up and down
the nave, rending
the clerestory with
fires of picker-
brush and dung.
Repudiating base tenures
of all officialdom,
pious or impious.
“The whole of
creation is God’s
clothing” and God
is within each
man naked, uncajoled. 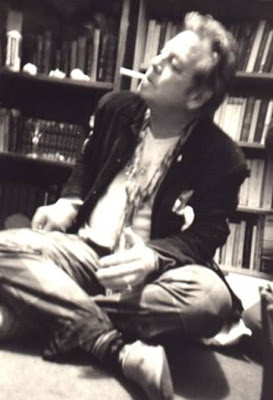