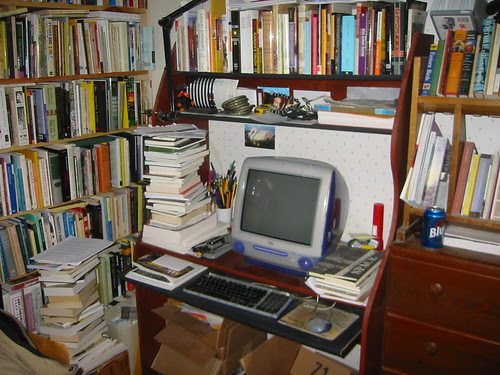 LVI
Thumbing the alumni bulletin, rubbing
up loss to a premonitory
sheen, shiny like a capsule
or a lozenge: what is
the point of absence burnish’d?
“The legend is Raoul Dufy
possess’d a terribly cunning tongue.”
The lousy February dusk is
flapping its skirts, driving off
the crows, each trailing crêpe-
paper streamers of light behind.
Whatever one is suffices one
plein air moment, a plenary
systolic, disgorging in a hurry
to push the heart’s song—
incomplete, dislodged, and abrupt—along.

Clark Coolidge, in an interview in Talking Poetry, says, riffing / explicating a totemic line of Maurice Blanchot’s—“One can only write if one arrives at the instant towards which one can only move through space opened up by the movement of writing”—,“you have to be writing in order to write.” To be a machine à ècrire, veritably, churning. So one notes how, doodling out spells of “dignify’d nonsense,” one sees emerge a writing. (Another Gallicism: comme la mayonnaise, l’ècriture prend où ne prend pas. Uncertainty of the emulsifying “agent” lying, one wagers, in the yolk of the egg. Where is writing’s yolk? In the yoke of writing itself.) In the introduction to Coolidge and Mayer’s The Cave (Adventures in Poetry, 2009), Marcella Durand reports Coolidge saying: “We were all interested in writing thousands of pages every day.” And adds (or maybe Mayer adds—it’s difficult to determine): “A feeling of everything being kept on forever . . . we didn’t understand endings.” (One question: Blanchot’s “movement of writing,” is it trigger’d by “constructivist” recopying? by arranging spit-out anagrammaticks, by, yuh, “sculpting”? In spite of the smarm-tags, I ask the question innocently: if the point is that “space opened up”—I identify it only in its aftermath, in the “return to the body” sense, or the “haul’d out still dripping after the immersion” sense—can that point—it’s a kind of trance-automatism—be “got at” by busy-work? Or does it require the pretense of “original exploratory” pilot’d by that niggardly hoosegow-buster, the Self? “I” “don’t” “know.”)

So one writes, one “keeps” writing. (Somewhere, Edna St. Vincent Millay, complains about how reading “Paradise Lost at three gulps makes one long to spring hysterical puns,” and adds pertly: “I say ‘one.’ The one is I.” A kind of load’d-for-bear anti-Rimbaud. No?) Or one reads waywardly (half The Cave, half Savage Beauty, half Radical Vernacular, with veritable toppling “stories” of books impinging), unfocused, in off hours, and fretting. (That’s not writing.) Does Edna St. Vincent Millay’s cheekiness match Gertrude Stein’s (sighingly “preferring not” to do the exam proctor’d by William James) when she writes (Vassar entrance exam): “I was prepared in American History at my home in Camden, Maine, in the hammock, on the roof, and behind the stove.” (She flunk’d. And got admitted.) And if Louis Untermeyer (literary editor of the Literary Supplement of the Chicago Evening Post, what one wag call’d “the most brilliant literary sheet published in America”) warn’d Millay against the perils of Bohemianism in New York, and she replies that she is “not so Bohemian by half as I was when I came,” explaining that “here one has to be one thing or the other, whereas at home one could be a little of both,” doesn’t one long to nod knowingly at the provincial miss’s swell dexterous palpating of core metropolitan provincialism and wager it ain’t so different today?

Is The Cave all about reiteration in deformation (try tracing the uses of the words “sneakers” and “alphabet”—first appearing in the line, “I’ve got my sneakers on. Alphabet,” to open “Modular?”—throughout the book)? Too, it is sheer rhythm:

Whats the elegance of any crush whats the space of 4 people moving depending somehow on you & new ones to enervate on your way home—only the real strong & obvious are shared, like blind chickens bared for frying or something but the real small defining ones small so are wasted, wasted out to sea, wasted one by one wasted out one by one one at a time by one or another one a different one by the way what work do you do so the reason I mention work is there’s some things I learned from you & i don’t stop to listen normal I steal & sink ships & yours aspect just seems to be one of them oceans no grudges against what they receive in a storm so such is not of their doing hard away from their design they have none endless they fill the frame

Stein (in the “one by one one”), and O’Hara’s “To the Harbormaster” (“oceans no grudges against what they receive in a storm” and that “hard away” sounding “hard alee”) and ending up—since one’s “in the vicinity” with O’Hara’s “Today” (“they fill the frame” echoing off “They’re strong as rocks.”) Why do I think it’s Mayer doing that (is it the sassiness of “i don’t stop to listen normal I steal”? hard to think of Coolidge as “sassy.”) The reiterations (“alphabet,” &c.): evidence that the whole sequence is more “work’d” than I would’ve thunk. (The collaborative forays of my “youth” were done in the sprightly buzzing temporality of bars—and remain’d in those bars, foreign the idea of permanence beyond the momentary whim, or gas.) Okay, still spelunking. 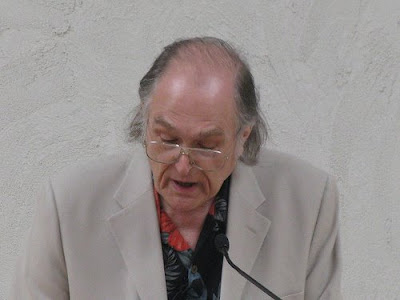