XLIII
A contrapuntal air:
Titian and Madagascar!
Dog to some
ha’penny desire
to flaunt imperturbably
the unsound junctures
of a soul
blemish’d by luck.
What the fuck.
Put a triptych
in a casino
or add centavos
discretely to hyper-
inflate the till—oh
a panhandler’s life
is the life
for . . . The song
fends off all
the blanch fusillades
of the wincing
philologists, and is
its own fill.

One thing I love dearly: sudden serendipitous conjunctures. So: I read Jennifer Moxley’s three essays in the new mark(s). I like something I call “easy-going” about the prose. It is a quality I find in Lyn Hejinian’s prose, too. Matter-of-fact, explicit, drawing down all of language’s clumsiest resources un-self-consciously, making a virtue of the crotchety wayward uglinesses of prose explicatories, anti-“poetic.” Moxley (in the second of the essays, titled “La Peau de Chagrin”): “A talisman which will grant all his desires. The catch is, of course, that for every wish granted, the skin, and by association Raphaël’s lifespan, shrinks.” Unremarkable and serviceable. (My attention to the language, though, oddly enough, is heighten’d exactly by Moxley’s (I assume it is Moxley’s) claim that here is an “essay” (and that each is so short). Inflicting a genre, defying its terms. (I am somewhat remind’d of Anne Carson’s “Short Talks”—here, two to consider—though I random entirely away, erring haphazard in the unshapeliness of my telling:

Short Talk on the Total Collection

From childhood he dreamed of being able to keep with him all the objects in the world lined up on his shelves and bookcases. He denied lack, oblivion or even the likelihood of a missing piece. Order streamed from Noah in blue triangles and as the pure fury of his classifications rose around him, engulfing his life they came to be called waves by others, who drowned, a world of them.

That “blue triangles” (“called waves by others”), a fancy, something Moxley’d not cotton to in any of the essays. The sheer writerliness of Carson’s “talk” here, another instance of defiance. And:

Short Talk on Who You Are

I want to know who you are. People talk about a voice calling in the wilderness. All through the Old Testament a voice, which is not the voice of God but which knows what is on God’s mind is crying out. While I am waiting, you could do me a favour. Who are you?

Put aside childish things for the moment to think about the commodity. It is, according to its master definer, “a thing which transcends sensuousness.” Not just a useful thing to be bought and sold, the commodity has mysterious metaphysical qualities.

Use-value does not explain this aura. We do not worship and create an entire social system around a thing because we find it useful. In fact, use may even reduce the fetish quality of some things (like a red pickle dish).

Marx: “Whence, then, arises the enigmatic character of the product of labor, as soon as it assumes the form of a commodity? Clearly from this form itself.” In other words, when does a made thing become a fetish? The moment it becomes a commodity. Commodities are things that leave us behind, that erase the “human brain, nerves, muscles and sense organs” that went into their making. Zombie-like, they replace social relations between men with relations between things. And thus men become the proxies of things, and things magical, because they have cast a spell over their makers.

The feudal system had no commodities. Men were not bound by things but by a rigid, transparent, social system. But things were still magic, because of God’s power over them, over all things. The religious veil removed by the Enlightenment rethreads itself in the factory, and is once more drawn over things, which, regaining their lost aura, turn back into fetishes. How different Marx’s veil from Mallarmé’s. In the latter’s tremble the neglected aesthetic asserts its independence.

In his analysis of the commodity Marx reawakens medieval mysticism in the heart of the Industrial Revolution (the very same vein that John Ruskin and the Pre-Raphaelites will tap). Perhaps the secret of the commodity’s fetish-like quality is nothing but this: a nostalgic desire in the bourgeois romantic mind for social relations to be fixed once again (whether backwards to feudalism or forward to communism), that he might be free of both the anxiety of longing for things and the fear of losing them.

(Note: that “like a red pickle dish”—is it a “blue triangle” gumming up the stylistic works? It is a fetish countersunk amid talk of the fetish. (Run a hand there: it is entirely smooth.) And, reading, exhaust’d with the rustle of print-outs, what I daily drag home to fluster about and attend to (happily thinking of a whole book of tiny Jennifer Moxley essays, digging away at, or launching up into the pure blue sky for aerial inspecting, the mysteries of the commodity and its fetishes and fetishists, not unlike the book Moxley translated by Jacqueline Risset call’d Sleep’s Powers (Ugly Duckling, 2008), I turn’d back to Emmett Grogan’s Ringolevio and read about Kenny Wisdom in the throes of a post-“psychedelic storm,” coming down off 600 microgram’s of lysergic acid diethylamide (with pal Billy Landout) and confronting the stark magic of the commodity:

He walked over to the sink, picked up a nearly empty bottle of Cott orange soda and finished it. He studied the empty for a moment and ran his thumb across the “Deposit” impressed in raised glass. He slammed the bottle against the porcelain, and the glass shattered into the sink. The noise startled Billy and he came into the small kitchen to see what it was. He saw Kenny standing over by the sink. There was a funny, intense look on his face which made Billy a bit apprehensive.
Kenny: Why was that bottle worth five cents?
Billy: Because it was a re-usable commodity.
Kenny: Why wasn’t it worth a dollar?
Billy: It didn’t have enough value . . .
Kenny: Magic.
Billy: Magic?
Kenny: The magic of property. Inanimate objects have no intrinsic value except what they can do for you, but in our culture they’re invested with all sorts of magical properties, and cops protect that magic by making sure property has to be paid for—the unimaginative flunkies. Everything revolves around profit and private property. Those are the premises. I just questioned the logic by destroying the magic.

Moxley says (in “Secret Meaning”), seemingly about “our” “own” devotions: “The Platonic view: poets ‘are not in their right mind when they make their beautiful songs, but they are like Corybants out of their wits dancing about.’” Is a poem “a made thing become a fetish,” endow’d with magical powers? Another view, that of Orpheus, torn apart and thrown to the winds by the Bacchante, the maenad pacifiers, a way of questioning the logic of one’s witless constructs. And so we fight so. 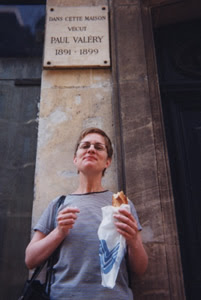