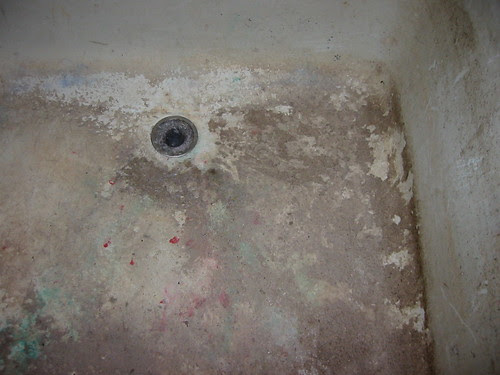 Jordan Davis, talking about Kevin Davies’s work in The Golden Age of Paraphernalia in The Nation: “He is a master of off-the-rack avant-garde tropes, such as parataxis, in which non sequitur is the basic rule for getting from one sentence to another.” Drew Gardner, talking about the book in The Poetry Project Newsletter (attemptly vainly, one assumes, to trigger a laugh out of some Mistress Quickly en paille): “The question that arises quickly when assessing The Golden Age of Paraphernalia is whether it is proto-Flarf, crypto-Flarf, or just out-right Flarf.” (Please, keep the noisy snorting down.) He continues:

The points of overlap are numerous: absurd political humor, seriousness mixed with wackiness, and a general cut-up pathos. [Got to hurt, that.] These elements in Davies’ work predate Flarf, but Flarfiness in poetry may very well begin with Issa, or perhaps the Yoga Sutras . . . This poetry is written, but it is also assembled. Absurd juxtapositions, exaggerated or ironic pathos, and hilarious, insane propositions and metaphors abound. Davies also appears to be condoning a new form of pastoral Flarf . . .

Several things. One is how what Davis calls “off-the-rack” (meaning, I’d think, common blunt’d everyday tools) paratactical “non sequitur” is tout’d by Gardner as “Flarfiness” itself, the “absurd juxtapositions.” Boosting product placement (and sales) by spiff’d up nomenclature for the same old same old, that is one way. The Flarf® Line.

Another (thing) is what one ’d call the Silliman Manœuvre, exercised here rather clumsily by Gardner. True to name, it’s a species of prestidigitation, a hand job, that endeavors to insert oneself into history by means of claiming precedent (“begin with Issa,” gulp) (and subsequent—“a new form of pastoral Flarf”) all up and down the line, the progressing line. (There’s a counter-thrust, also wield’d by Silliman, that depends on a kind of eyelid-batty ingénue deflecting of all history. One sees it in “The New Sentence” in the faux-naïve: “I know of no precedent for this . . .”) In Silliman’s own current position of (how did Baraka put it, “self satisfied mediocrity”?), he needs Flarf just as much as Flarf needs him (legitimizing Big Daddy). Note how quickly he jumps to list any miserable Flarf bits on what passes for a blog these days, though (largely, “prophylactically”) avoiding any trouble spots where Flarf-talk grows contentious, oppositional. The bande à Flarfy clearly fills some gaping hole in Silliman’s narrow “post-avant” world where tiny groupuscules of (urban) warriors do battle against the benight’d School of Quietude (Silliman’s resemblance to Nixon here shouldn’t be miss’d: recall the way Tricky Dick summon’d up the “silent majority” to prop up a different argument)—indeed, Silliman’s been looking for such a “body” for years (see earlier premature hosannahs for the likes of the New Brutalists, or incredibly presumptuous back-formations like the New Western Zen Cowboys, gulp.)

Another (thing) is that word-cloud word “hilarious.” Except it’s not. Its ephebes—Flarf’s ephebes—are always claiming Flarf’s “hilarity.” And one tries out the wan smile reserved for the too-silly child. “Yes, dear, that’s funny, now go away.” Gardner points to Davies’s “hilarious, insane propositions and metaphors” and claims that Davies’s is a poetry that “commits to a full to a full activation of humor, a move that shows courage and nerve in a time when humor as a poetic power has been largely left unused and often even frowned upon by the cast of professional frowners who tend to police the received wisdoms in this corner of the culture,” whew. Gee, Billy Collins, Dean Young, Charles Bernstein, James Tate, John Ashbery—isn’t funny come a-cropper already? What “courage and nerve”? Jordan Davis, whilst sensibly allowing that humor’s rather prevalent and legit, though difficult (how’d Pound put it: “‘hilarity is difficult’ sd/ Mr Sullivan”?)—Davis makes it easy: “I’m not saying it’s easy to make funny poems. For starters, the jokes have to be funny. Then, too, the poems have to be good.” Which pretty much clears that up. He provides a list of a number of funny poets: Paul Muldoon, Ron Padgett, Alice Notley, Frederick Seidel, August Kleinzahler (“would be the funniest living poet if he were funny,” though, there, I think Davis is just trying to be funny.) What I find troublesome about Davis’s approach is precisely the applying of comic standards to poetry. So one reads how Davies is “writing poems that one can easily imagine being declaimed by John Cleese or Al Franken.” Or:

As with the best stand-up routines, Davies best poems sustain the reader’s attention without providing context, narrative or any kind of framework beyond our unstable environment, the perennial duplicity of authority and the waste to which our psychosocial landscape has been laid. Surely there are some readers who have been conditioned by at least the past eight years to share this perspective: and for them, this poetry says it’s OK to laugh about it now.

That, just after saying, oddly enough, that Davies himself “is glumly oblivious to the issue.”

I like Davies’s book enormously. I question, though, the denaturing of it (“it’s OK to laugh”) to a series of comedy club one-liners when it’s apparent that laughter’s going to keep coming only through gritted teeth. I find it telling that Davis is capable of pointing to Davies’s “trenchant” (and it is) commentary depicting the dystopia of, in Davis’s words, “Google-ized globe” (in Davies’s brilliant riff: “Any surface at all, inside or out, you touch it and a scroll menu appears, listing recent history, / chemical make up, distance to the sun in millimeters, distance to the Vatican in inches, famous people / who have previously touched this spot, fat content, will to power, adjacencies, and further articulations.”) And Flarfist Gardner (busy “touching” Google all up and down its svelteness, completely seduced by it, using it with all the rest of the rodeo queen nappy-poker Flarfists—including Davis, though he’s too canny and politick to spell out any allegiance, or “stance”—to “assemble” poems) thinks Kevin Davies is a proto-crypto F? My word.

XXXVII
Dignity with bombast, that’s what
I like. Am avid for
an incursion, shelter’d here under
the principality’s dole out of
rhum. Run down and jump
that ha-ha, fetch me up
a good laugh. We’re dismantling
the palazzo, bludgeoning off any
disfiguring lumps of statuary, yes,
with bats. Okay, when you
shout Rebuttal! I jam my
fist down into my trousers-
pocket with a solid whomp.
I am sappy for breeding
a new comic state of
grace, or a new state
of comic grace. I am
combing grease into nude stud.
Like a greedy grazier I
am surround’d by cows, insatiable
cormorants, harpies of the nowt.