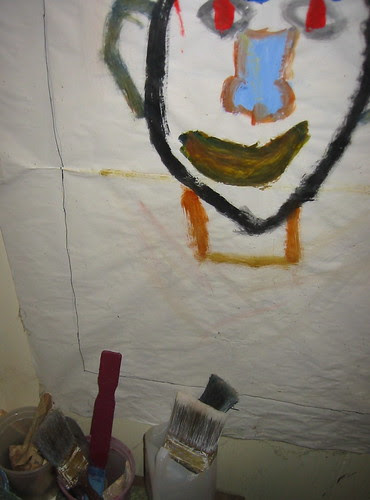 Larry Fagin sent me a side-stapled thing with a drawing of a horse (and a flower and a green-hood’d unidentifiable) in color’d inks by Guillaume Apollinaire for a cover—Sylvia Gorelick’s Seven Poems for Bill Berkson (Kostro Editions, 2009). Here’s one of the pieces:

I fancy
I will never be myself
again
but I must!
and go on living
with muted poise
to explain: there are no
mementos

Swift-script’d, just like that. It shoots down the page so quickly (half-notational, effortless) that one’s apt to miss some of the details that so exactly depict the punchy rambunctious constraint (an indelicate balance, that) of wanting to get the hell out of some kind of aftermath: that risqué horse of morning “bridled . . . at the ready and wailing / for it” (not willing, not waiting, though each echoes within); that prissy-mouthful “with muted poise / to explain”; or that terrific short-i’d restraint at the end—the clipped off soundings of “limber,” “insist,” “hit,” “precision,” rolling into the relief and roundness of “& the idol’s fall” (a fullness anticipated only by “bull’s”). Some of the natural ease of O’Hara, certainly, though I recall, too—at the moment of “I fancy / I will never be myself / again / but I must!”—Tom Clark’s lines in “Like musical instruments,” “You feel like // You’ll never feel like touching anything or anyone / Again / And then you do.”

Without straining, without arming herself with the far-fetch’d and uncommon, Gorelick consistently manages to slay in these pieces, mostly through startling imagery, though, too, through “mere” pacing. Look at the beginning to “A Letter”:

can’t tell what
love that is

The mystery of how “states / fall in line” (states like Georgia? states of being?) (lining up? perishing?) relating to some unspicify’d meeting. The pronoun shift adding to an unsettling sense of who’s present. Not “what / love is” but “what / love that is.” Later in “A Letter”: “Spanish radio is a gushing panic” and “I / feel gone / again // like a little apparatus.” Terrific moments. And throughout. Things like “to humble myself / I call myself / particular”; “a bouquet isn’t useful / until it’s written down”; “I’ll make it / quick / or be pin-stunned / like a boxer / (in heels) // give me a break / you fake / or facedown / you’ll follow.” If call’d to point to a weakness, I’d probably suggest the narrative (“I went out to steal a modest piece / of black & classless warmth”; “busted at sixteen!”) of “How to Progress” gets a little self-glorying in tone, and predictable in story (though I do like moments, time “passing / like a fattish fog” and the end, “I make up my mind / to go along with certain chairs & tables / in certain bookstores / until they stop playing / hard bop”). Nobody needs to become a Rimbaldian patsy for some “poetic” way of being. (Nobody needs to tell anybody how to behave).

XXXVI
Minimal’s the stitchery
in the oil-
cloth great-coat

of time, is
how one sentence
goes, the way

sentences do &
must, preternaturally whole,
with no oily

slippage, no lingual
wear and tear
ever, the rocks!

Or four wind-
lash’d pedestrians jut
out into a

crosswalk, in saturated
Cibachrome, a photograph
made precisely to

make the present
no longer possible.
So rapt is

that one girl
in yellow rubber
boots—it’s raining

and suasion cuts
to the uncurb’d
curl of water

thrown up by
the speeding yellow
taxi, midair, undrenching. 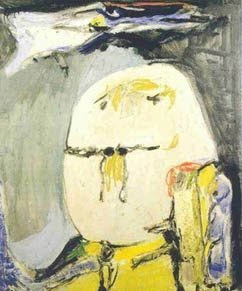