“The Author of Anticipation” 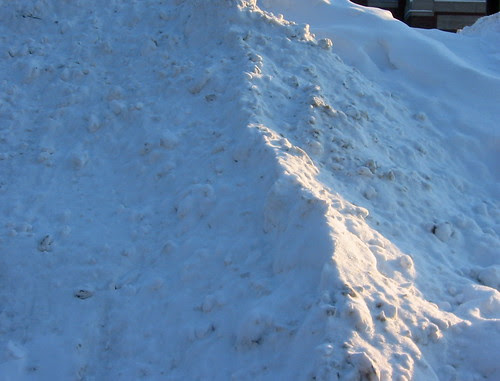 LIV
Events assuming a shape
that is newsworthy enough
to make golden a
rule-bound economy of
shapeliness, or “event.” Stump’d
by the tautological. That
is the project of
the novel. Perfume testifying
to a love that
went up (or off)
in a puff of
smoke: Jim, and Bert,
and Melissa; or, Bert,
Melissa, and Jim.
A filament (a thread,
coil’d within a bulb)
is one distillation of
starlight, earth-lash’d and
snug’d in by man’s
own terrible faulty progress.
“Isn’t it, golden boy?”
It’s all irreproachable fondling,
miasmic self-effacement, slough’d
down exponential lucre snatch’d
out under colossal stone
noses, a wink of
misdirection, and obedience to
a course mark’d by
debt and wrong-doing.
A new shape riotous
shilling a non-event.

Along the perennial lines of inquiry (rais’d, of late, here) regarding the permissibility of the negative assessment of miserably bad verse (or what, rather nicely, elsewhere—in London, in 1778, in a treatise by “the author of Anticipation” call’d “The Wreath of Fashion, or, The Art of Sentimental Poetry”—got label’d “a misapplication, not a defect, of talents” which “seems to have betrayed their Authors into some degree of false Taste” (he provides a stunning example: how the three late compositions by a “Noble Author” consist’d of “One, an Ode upon the death of Mr. Gray; the two others, upon the death of his Lordship’s Spaniel”—spaniel being, one thinks, the eighteenth century’s equivalent of the sad twenty-first’s squid)) I throw my lot with miserable assessors, the mockers of the meretriciously inert, the supercilious feverish, the simplest achievers of high repute, the old inspecificity bedung’d by gewgaws and bauble, all that rates a frown (or a snarl) under the barely literate sun.

There is, first, the general approach (useful for flushing out small bands of vituperators, covens of fakes, and self-satisfy’d groupuscules). Our correspondent ably writes, pricking the unseemly coterie with a select barb simultaneously combining the horridness of French form, the inestimable and out-maneuverable Greek claim to lyric originality, and character in the shape of Mr. Geoffrey Chaucer’s lumpish and bristly wife of Bath:

The reigning fashion in modern poesy is Sentimental Panegyrick on Married Beauties. This appears in a thousand various Shapes; from Bouts Rhimeès on the wou’d-be Sappho of Bath, up to Doggerel Epistles to the lovely Amoret.

As such, no closer inspection, or verification, or “closer reading” is necessary. Though, pointedly, our correspondent, seeing recriminatory belittlings and grievous cursing coming up in advance, makes clear that in addressing (or “attempting to ridicule”) any such “modish folly,” “it is scarcely necessary to apologize to the several Personages of the Sentimental train, for introducing their names.” Whoo, whooooo. I hear it coming ’round that bend, the sentimental roisterers with ambivalence in tow. I, though, like Johnny Cash, the man in black, so crank’d up downing white crosses by the paw-full he’s strumming that ax way up the neck, choking a slash rhythm out of it, with that torn piece of paper wove into the strings—“I like a snare drum sound, so I put it there”—, I walk the line. The redoubt’d “author of Anticipation,” a Mr. Tickell (first name Richard I once heard) puts it so:

When a Poet announces himself, and publickly wears his Laurels, He is lawful game for the Critics: And it makes no difference, whether his works come from the Press, or, according to Sir Benjamin Backbite’s system, “circulate in Manuscript.” Besides, to canvass the slighter imperfections, either of stile or of conduct, seems to be the limit of poetical censure. It is only the desperate Satyrist, whose invenomed pen strikes at the character and honour of Individuals, that perverts and disgraces Poetry:—such aspersions, if well founded, are too gross for the tribunal of the Muses; and if, (as is generally the case) they are utterly false, they recoil not only on the Author, but on the very art itself, which can so easily be perverted to so bad a Purpose.—But who can be hurt by Critique on his Charades and Rebusses?—An imputation of false Taste may not be very pleasant, but it never can seriously offend Men of sense and good-breeding: Both which qualities, as the Author agrees with all the world in acknowledging his Personages to possess in the highest degree, so he requests that not only they, but the few others who may happen to read his Ravings, will acquit him of any intention to give the slightest offence.

If that would seem to absolve any who claim the negative “review” hurts the wilting flower that is poesy (“too gross for the tribunal of the Muses”), one ought recall, the Muse’s grosser lot nowadays, her great flinging of sashay and pose, her snout-in-garbage tribunalism, her increasingly desperate Satires, oh ye indelicate fleurs! Besides, ain’t we all “Men of sense and good-breeding”? (I know I am), and who, darling, could ever offend an imputation (or impute offense) to such? We shall (we must, oh for throaty-hoarse and hortatory saber-rattling in honor of manifestoes everywhere) continue to bad-mouth the Dudleys, besmirch the Hoosiers, and generally cop to a fettle of unencumber’d agon against “reigning fashion” and “Noble Author” alike.

Ah, the weekend. Slumbers and gnashings, inveterate the both. I did read a thin volume of memoirs by Lord Berners (1883-1950), a.k.a. Gerald Hugh Tyrwhitt-Wilson, call’d Dresden (Turtle Point / Helen Marx, 2008). Lord Berners, composer (“the English Satie”), novelist (he wrote a notorious roman-à-clef call’d The Girls of Radcliff Hall depicting himself and buddies Cecil Beaton et al. as memebers of a girls school), painter, “the versatile peer.” He writes a kind of impeccably dry prose, nigh-priggish, quite funny. (The book, one in a series of autobiographical pieces, suffers only by reference to earlier events—what happen’d in Résenlieu, &c.—though one “ought” begin at the beginning, and thwart the complaint . . .) I rather liked a tiny prelude to a report concerning the ascent of “The Brocken”:

There are two excellent descriptions of an ascent of the Brocken, both by poets. One by Heine in the Harzreise. The other by Coleridge. The two accounts are very different. Coleridge describes with a wealth of poetic detail the scenery observed during the ascent and the descent of the mountain, but of the Brocken itself he says practically nothing. Except for a short poem in which he speaks of his longing for England and the ubiquity of God, he passes it over in silence. Heine, on the other hand, gives an elaborate account of the scenes of jollity and dissipation that took place in the Gasthaus on the top of the Brocken, ending with the incident of two intoxicated youths saluting the night in Ossianic language before an open cup board which they mistook for a widnow.

Lord Berners is rather disappoint’d to find no liveliness at the Gasthaus, finding “orderly and behaved” schoolboys and tourists: “The rest of the crowd was composed of bourgeois families all very placid and cow-like.” And a report of reading the ubiquitous Goethe, and Eckermann’s Conversations with:

Among other curiosities there was a strange account of Schiller’s rotten apples that had an almost Freudian flavour. Goethe visited Schiller and, finding him absent, seated himself at Schiller’s writing table. Almost as once he began to “feel queer.” “At first I did not know to what cause to ascribe my wretched and unusual state—until I discovered that a dreadful odour issued from a drawer. I opened it and found to my amazement that it was full of rotten apples. His wife told me that the drawer was always filled with rotten apples because the smell was beneficial to Schiller and he could not work or live without it.”

Remind me to tell you of the time I seat’d myself down at Ron Silliman’s desk in the Tenderloin, and what I found there. I’d enlist Lord Berners against the quaint bearers of earnest toddies any day. He says: “In contemporary novels I had read of young men who were in the habit of discussing in the profoundest manner their souls, their religion and their plans for bettering the world. I was rather glad that I didn’t know any such young men.” 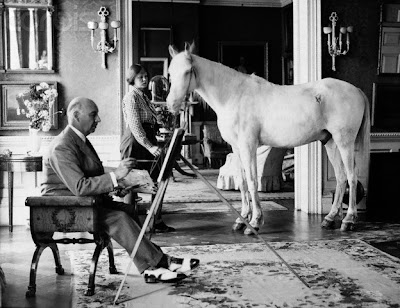