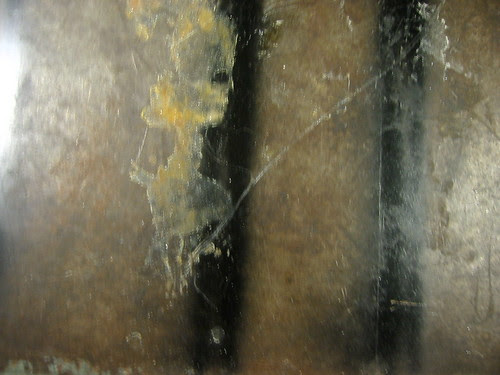 LI
A Bible near
Mobile’s lodged in
a sorghum stump-
hole, cover’d with
snakeskins, venom, and
blood. A urine-
ruin’d Qur’an rots
in an Iraqi
dump. Thud of
the Talmud into
the Gaza mud.
“Oh” “my” “God.”

People are always trying to pin Wallace Stevens on me. Which is all right, as he is not the tail to my donkey. Though I do read him, and admire him more and more the older I get. He’s one of the poets, as I said earlier, I go to the shelf for at night when I feel like a drink of poetry. But I still don’t—or haven’t—read him in a systematic or nefarious way, i.e., he’s not a house I’ve burgled very often. Just the odd plastic flamingo or wooden duck from the lawn over the years.
Still, the little repetition riff in what you call the third stanza (and I would call the third section) is most probably Stevensian—at least it’s the sort of maneuver he would do from time to time. I find I do it from time to time, though not thinking, or (more importantly) knowing it came from Wally World.

[Wright is talking here—and slyly acting out through the point’d repetition of “from time to time”—about lines that go:

Maybe on one of those nights I went to the bookshelf I had a couple of drinks too many from The Collected Poems. As usual in such cases, I hadn’t meant to, if I did, and didn’t want to as well.
I suppose one of the reasons I like to read Stevens now (and Yeats and Celan) is that there is in them a kind of acceptance of the stanchezza profonda, the deep exhaustion, at the center of things which most of us come in contact with as we get older [the interview’s print’d in 2000; Wright aged 65], I don’t mean a physical tiredness (though there is some of that), but the spiritual weariness we bump up against in middle-age, a weariness, I might add, we never really grapple with and certainly never conquer, but which we acknowledge and give its due. So I suppose if that’s “a new, different” way of reading Stevens, when I read him, I confess I have done that. But, as I say, I do it with almost all the older masters I tend to read now. Hardy, for instance, recently. Donald Justice has expressed this common failing and inevitability very beautifully in his later poems.
As for the “desire” line of mine in the last section, I have no inkling that that was / is Stevensian. Of course, if you’re looking, everything sounds like Stevens. He did touch all the bases, you know. He went all the way around.

Wright is talking about the final part (of a half dozen even) of “Night Rider”:

Snuff end of February, no moon and
cold tongs to the touch,
Year of the Rabbit, 15 degrees.
Crunch, crunch goes grass like broken head hair,
Our breath like Apache smoke signals
—they come, they come—
From one yard to the next. But they don’t come, Lord, they don’t.

If I had, as Robert Johnson says, possession over Judgment Day,
No stone would rest unrisen,
And life, which promises only that we will desire
Only the things we can’t have,
Would be rolled away,
cool dark of cave mouth first exit,

Crocus heads gazing quietly at the distant southern hills.
As one absorbed in looking around,
each time I’ve looked, each time it’s new—
Each time I said it, I got it wrong.
In front of me, two plus two, behind me, two plus two.
If I could do what I thought I could do, I would leave no trace.

Later Wright identifies such a beast a “fifteen-line, three stanza unit . . . that’s been my favorite . . . in my earlier, surely pre-Stevensian (if I am now, as you hint, in my Stevensian mode) days.” Dunce with broken head that I be, I don’t see beyond the half-lines, the drop-downs, and muss the count. Wright compares the form to “a basketball player who feels most comfortable shooting from a certain spot on the floor. . . . It, in my case, seems to have evolved, like the duckbilled platypus, to a condition of ease and Dasein that nature intended me to have whenever I needed it.” (I love a man without formal pretense, or fetish.) I used to “identify” with a three-lined stanza; now, a three-word line. What puddles up for me in the “Night Rider” section above: the array’d repetitions: “Crunch, crunch”; “they come, they come”; “they don’t . . . they don’t”; “each time . . . each time . . . / Each time”; “two plus two . . . two plus two”; “I could do . . . I could do.” Extraordinary and bold maneuver, teetering between comical and ominous (as, similarly, the funny-gruesome of underfoot crunching of “grass like broken head hair”—presumably the sound of hair matted with blood).

About Pound (earlier in the interview—seems Wright’d jump at mention of Stevens for all the ambivalence he shows regarding Pound), and “lifelong ‘imagist’ tendencies (small i, however)”:

I have . . . in a younger, more naïve period, cited Pound as my first major poetic influence. At least from a writer. And, boy, have I been hoisted on that halyard ever since. I read Pound forty years ago. He was the first poet I ever read seriously, and I haven’t had much to do with him since (though I did teach a seminar at UC Irvine on him about twenty years ago). I wasn’t sophisticated enough at the time to keep my mouth shut, to, as Robert Frost advised, leave no track. In any case, sure, I learned a lot from him. I’m proud to have learned from a great poet and not someone popular from the generation above me, as is so often, and unwisely, the case. [There you go, acolytes and sycophants.] And from whom one has to go about unlearning over the years. I’ve said what I have to say about Pound—the great poet gone wrong, botching his own work, unable to keep his public mouth shut (as Eliot did, as others did), a small-time Lear ranting and temporarily insane in the cages (where, ironically, he wrote some of his most beautiful stuff), all that . . . Old loves rise up from the dark every so often, but it’s best remembered that the dark is where they live now. Whatever it was I got from him I got decades ago, and have since assimilated or subsumed into my own manner. Whatever that manner is. I thank him for early advice, I thank him for opening the poetic impulse in me that until I read him had found no outlet, but I carry no torch.

I probably related here before how, late ’eighties one evening at the Guggenheim (a shiny black Volkswagen beetle park’d in front, absolutely cover’d with tiny lightbulbs that went on and off in “waves,” a man who look’d like what I imagine Giorgio Armani looking like lounging petulantly near it—maybe a better show than what went down inside), in a reading of—I think—“Southern writers,” Wright, in a garish tie (comportment in cartoonish accessories related to thin line between comic and ominous?) at the podium related how he’d “got” the tie off Ezra Pound, “who’d got it off a man named Yeats.” Ah, lineage. First it’s a lifeline, then it’s a strangling rope. What O’Hara call’d “the divine trap.”

A terribly pertinent letter to Peter Schjeldahl here. Pertinent to “everything and everything,” the way anything one prefers is. (I do like the Bartleby-inflect’d scrawl of Schjeldahl’s reply to Modern Painters.) What is art that ’d “prefer not to” be art? or judged so? 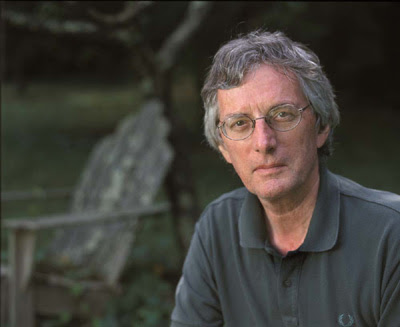