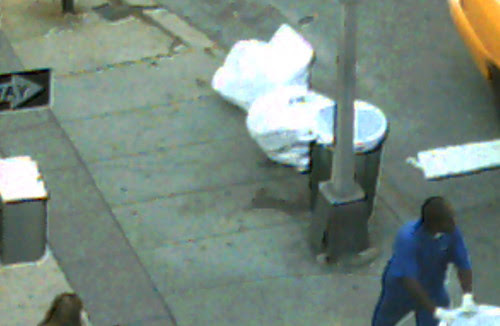 Steve “Biff bam boom!” Benson gets the final swing at “everyday life” in The Grand Piano 4. (Though, reading through the unsign’d back matter, I see a disclaimer—“As originally planned, each author was to follow the prompt of the previous, but as the work has grown in complexity [!?] many sections have been written out of order. In the end, there is no simple temporal sequence in the writing, nor do the authors adhere to any prescribed themes. The Grand Piano’s development is thus nonlinear [tired code word of “the modern”], even as it is being published in serial form [like Dickens!].” Okay, my gassy. Benson’s contribution takes the form of a self-interview, mostly concern’d with Benson’s fitting in (or not) to various social roles. A snatch of it:

I joined an MFA program in poetry writing, without any comrades to counter the atomizing normalizing influences, so there I was just alone with my difference, showing it, and it was acknowledged—
—Like in your family.
—Yes. They were sort of impressed, but now it was largely frailness, flailing, and self-sabotage that was on display, as everything centered on the portrayal of the self.
—The betrayal of the self?
—Yes. That’s what I meant.
—To what degree was your participation in the Language school a vindication of the self?
—A revenge of the self, maybe. A counter-assault of the self. Self against self. Biff bam boom! The creative writing program aesthetic was identified, by Language writers, as totemizing the self, if not totalizing it, which was in effect a tiresome domestication—a reduction of being a person into the terms of my family of origin, terms they might get, whether transfigured into excellent writing or not.

Which sounds like a tinker’s version of an MFA “aesthetic” cobbled together out of the Dictionnaire des idées reçues. “Transfigured” into “theory-speak,” which is not writing (meaning écriture, with all its gappy dissipance and scrawl, the way it whiffs at pitches). One is reminded of the observation of the Swiss Joycean Fritz Senn, who claim’d that while early critical looks at Joyce missed the language (busy spotting the myth, symbol, whatever “behind” it), in the age of theory, “language, though given generous lip service, tends to be bypassed now for different reasons.” Senn: “At first it was not seen at all. Now that it has become Language (or its upstart twin, Discourse), it is abstracted out of our focus again.” (Is there any writing left in Language writing’s memoirs? Or is it become all buzz-word, analysis, and rehash, with the kind of sleepy authority old semi-autonomous discourses and vocabs gain out of sheer longevity, running along, stoked by the drones of what one might designate “indefatigable tiredness”?)

By the end of ’s few pages, Benson seems ready for an assessment. He asks:

What are the conditions for this kind of group-specific political praxis making a difference or not? If it made a significant difference in the development of its agents who would later disperse into diverse functions in a larger society, enabling their agency, resilience, self-awareness, and invention, is there any problem with that?

The answer, of course, is, of course not. (Though the use of the term “agents” is a little spooky.) What’s odd and noticeable about the argument is how precisely it aligns with the arguments made for MFA creative writing program graduates by the less benight’d chiefs of that industry (the ones who must’ve realized early on how training writers to become writers who’ll teach more upcoming writers is an impossible Ponzi scheme, completely untenable). Those chiefs’ll argue that, though not all individuals exiting a particular program will “go on to become writers,” they’ll each have sharpen’d reading skills, attentiveness, heuristic and critical abilities, &c., &c. “Fail’d writers make better citizens.” Even fail’d Language writers.