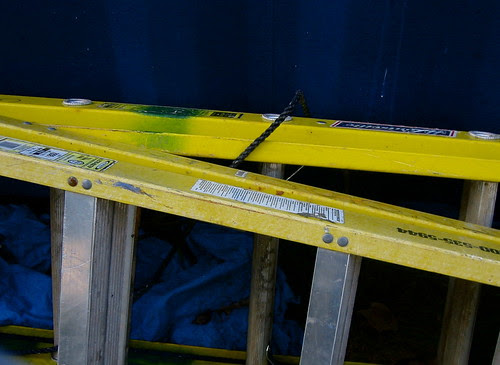 Lyn Hejinian—in The Grand Piano 4—disposes of daily life by defining it as precisely that which is goes by unnoticed, unrecall’d: “Daily life, insofar as it’s the realm of recurrence, habit, unmarked continuity, and routine, lacks evident singularity and, though it runs on memory, it doesn’t make itself memorable, except by chance, as prompted by contingencies of the present or of imagination.” (In a lovely definition, Hejinian puts the “substance” of daily life into “the way things went along, as characteristic and definitive as a person’s gait or way of drinking from a cup, the termination of which is what death brings about”—why do I want to call that the “lilt” of daily life?) A brave attempt to limn its late ’seventies version (for her) results in a “near but unclear horizon,” the lost vagaries of dailiness fill’d (quickly, firmly, pointedly, though with a natural grace—one senses that Hejinian ’s never one to dally or lack self-command) by talk of the “black cast-iron Chandler-Price printing press and two wooden California job case cabinets” housed in a room off the kitchen, Tuumba Press—its “handset, hand-collated, and sometimes hand-decorated chapbooks.” Thus, the sharable daily is the literary daily, melding the personal and the public through words, through work’d and word’d objects. Hejinian:

It was an ongoing mediating activity, a multi-valenced sphere of interactivity, between myself as a social subject of the books (the books in relation to me as a subject who was forming and formulating emotions and commitments) and the books as particular objects (things in the material sense but also as bearers of identifications and social structuring).

Not exactly the sense of how a job stick’ll go heavy in one’s hand as the leads (between lines) get chuck’d into place with a satisfying thunk. Not exactly how the tympan sheet’ll get so emboss’d (invisible dent-writing finger-read) after one run as to thwart using it for a second. (Maybe memories of daily life reside mostly securely in the muscles.)

There’s a remarkable balance to Hejinian’s sense of “work” (avoiding the “Puritan”). She sees how the Tuumba chapbooks represent “significant . . . work—work that I did for the work they could do by virtue of the work others might do in making sense of them.” And she neatly sets such activities into what amounts to both an epistemological and an ethical way of (daily) life:

. . . attention to the shaping relations between subject and objects (things) and the nature of their orientation to each other can tell us also about how (and perhaps what and why) we experience. I am continually interested in experiencing things . . . I mean things in the multiple co-existing senses that the term (in English) carries: as event, deed, action, affair, detail, matter, possession, item, fact, idea, entity, etc. Things that get experienced accrue content; that may be what it means to gain experience.

And, in a brilliant paragraph:

Daily life, because we live by doing things with things and do them according to habits, rules, and routines, passes through all kinds of psychological as well as ideological constructions, and querying such assumptions was part of our daily life, in turn. Agency—being conscious of one’s objects (and, optimally, choosing them) and intending the character of one’s interrelations—depends on it. As Gilles Deleuze says (in The Logic of Sense), “Either ethics makes no sense at all or this is what it means and has nothing else to say: not to be unworthy of [i.e. inadequate to] what happens to us.”

Would I—had I read that twenty or thirty years back—have somehow avoid’d the lost years of flailing about, yammering wildly about how one ought “live one’s life, rather than allow it to slip by,” trying to figure out a way to do that? Which means, simply, finding a way to make one’s literary life daily?

Hejinian’s move is to reconstitute “daily life” out of the newspapers, going to the archives for the price of meat and potatoes, for the names of the bestsellers, making history’s minutia (wholly unequal to the “lilt” of muscle-memory) stand in for it. What’s remarkable is how little things change—even the names remain:

The “This World” section of the Sunday paper [for September 16, 1979] includes a short review of three “Washington novels,” including Executive Privilege: A Washington Novel by Lynne Cheney (“wife of Wymoing [sic] Rep. Richard Cheney”). The characters include “Vice President Boyston, who kicks chairs when he gets mad,” and “President Jenner,” who “previously in his career . . . went through a psychological funk.”

À l’époque, Hejinian’d just finish’d Gesualdo; she quotes its opening: “Gesualdo d rests his life faithful, his, in pieces, are discontinuous and harm the use, who did not lack intensity.” Yeatsian echoes, disintegration, autonomy, reflecting its era solely (possibly) through form? Is this what it means to make an art that is rendered harmlessly ahistorical by its formal insistences? The lines ring oddly against the newspaper report’s overwhelming banality—“Could You Give Up Your Hair Dryer?”—punctured rarely by glimpses of the dire—war “raging in ‘Zimbabwe Rhodesia.’”

Oddly enough (or perhaps not so—each Grand Pianist “responds” to the writer immediately prior) following my ineffectual hand-wringing (flailing) of yesterday about class, Hejinian, too, mentions (only to drop): “. . . class remains one of the least discussed, most vexing, issues affecting our social and political lives—and, perhaps, our artistic ones. It’s an issue I’m persistently uncomfortable with personally, although I am often engaged with it at a theoretical level.” Of course (my flailing). Though, oughtn’t the “experiment in collective autobiography” allow the group a place for trying to write against that discomfort? Unless the Piano is merely the opportunity to write oneself—as Tom Mandel says (jokingly, I think) “into the record.”