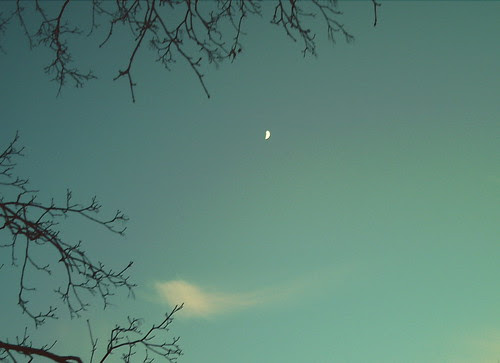 Half Moon and Cloud Remnant

Friday’s squibs had all the earmarks of a diminuendo, and the snow Saturday night into Sunday mark’d a readjustment, what one used to call a “downer”—shovelling “out,” and blasting the Lumina through the bigger “drifts.” And napping lightly in lieu of seasonal chores, rather thanking the mad accumulation for that. One’s about to elbow the planetoidal umbrageous aside, turn again into the lengthening days, something to measure with a wet finger poised to the breeze coming up out of the south, and one ought thank the bloody gods for that. And a corner turn’d’s a corner turned. I keep thinking of how Gordon Matta-Clark would simply cut a big hole straight through a house. Or sop up odd lots at city tax auctions, in order to own, say, a ninety-five foot long “parcel” of Queens, something that ran down the middle of somebody’s existing driveway and measured one exact foot in width. And, re-reading A Portrait of the Artist as a Young Man for what is probably the first “adult” reading (“am I an adult?”)—I recall reading “most” of it in my youth, thinking “who’s Parnell?” and I think, abandoning it amidst some Joycean (Dedalus-esque) religious turbulence near the end—being raised a Unitarian, I couldn’t “abide” religious turbulence. I recall, too, reading its first page or so in the Modern Library edition pull’d off the bookshelf at home when I’s a wee lad (a shorn lamb, baggy under-eyes, Buster Brown T-shirt, angelically complect’d, oh)—and how it unnerved me (and thrill’d me—I would read it again and again) to read about “the moocow coming down along the road” and how it “met a nicens little boy named baby tuckoo. . . .” And that father who had “a hairy face.” All that. The “baby tuckoo” got vaguely associated in my angelic brainpan with Little Black Sambo—“baby tuckoo” ’d all the mysteries (considerable in northern Michigan) of any “darker race.” The “moocow”: I simply couldn’t comprehend why an adult’d talk so stupid (authors didn’t exist, even though books did—I wouldn’t’ve thought to wonder about Mr. Joyce’s particular enfeebledness in calling a cow a “moocow”). That “lemon platt” bother’d one, too. “The moocow came down the road where Betty Byrne lived: she sold lemon platt.” The “platt” sound’d like a rude noise. Or like some kind of choke-evoking blubbery coagulant. Only at the beginning of the fifth paragraph did I reach a tender truth identifiable: “When you wet the bed first it is warm then it gets cold.” And that somewhat shame-worthy. All of it as if Stephen Dedalus’s apprehensions of the world got mimick’d in my apprehensions of the book. I probably read the first pages a half a hundred times before I could launch myself into it.