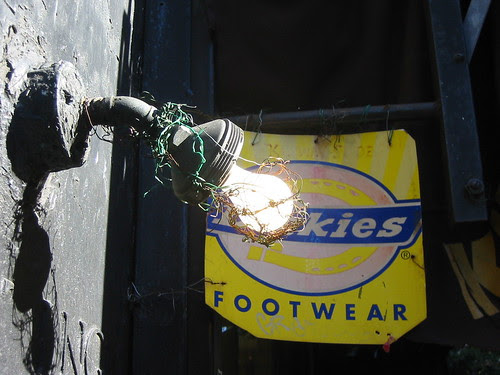 Finish’d reading Juliana Spahr’s The Transformation (Atelos, 2007). And kept, in my attempt to finish, thinking of something Joe Brainard’d written—I think in a near-final issue of Gegenschein Quarterly, current whereabouts unknown—a remark (regarding yellow smiley faces) that ended with a hard scribble, an emphatically dangerous scribble, beautiful in a way, as only Joe Brainard’d make a scribble of exasperation beautiful. And I thought, reading Spahr, if I had to read one more sentence that contain’d the phrase “those who had genealogical ties to the island from before the whaling ships arrived,” or one that contain’d the phrase “fragmentation, quotation, disruption, disjunction, agrammatical syntax, and so on,” or one that contain’d the phrase “words like asbestos, lead, mercury, dioxins, furans, hydrogen cyanide, benzene, xylene, chromium, polychlorinated biphenyls, aromatic hydrocarbons, and volatile organic compounds entered their daily conversations,” that I would just—and there I would reproduce Joe Brainard’s famous dangerous scribble . . . Not because The Transformation is a kind of yellow smiley face of a book—it attempts to avoid that, it turns itself red in the face trying to avoid that. No, because it insists on willfully, “purposefully naïve” mannerisms—a kind of superficial Stein technique, dumb’d down and repetitive—to accommodate a whole complex of feelings, political statement, and artistic thinking. And just as the yellow smiley face glosses over anything besides a kind of wide-eyed zomboid affirming (“Have a Nice Day!”), no off-key notes in the choir, so The Transformation (as a result of its infantilist stance) transforms nothing, nor asks that anything be transform’d: its gloss is of an engagement little beyond pinning a shiny yellow button to one’s lapel.

Spahr points disapprovingly at a kind of touristique writing, one particularly noticeable in pieces about Hawaii (where she’s located in the early parts of the book), a “nature writing,” or “local color” writing:

Many people around them were so moved by the island that they wrote poems celebrating nature. Sometimes people from afar arrived by plane, wrote a poem, and then left by plane. These poems were called 747 poems by those who did not leave by plane, those of all sorts who called the island home.

And, sure, orientalism is everywhere, that tendency to drape little nothings in new-found exotica, gussying up the otherwise mundane. (I recall Baxter Hathaway telling me about a brief month or so in Mexico—“I had the good sense not to try to write about it.” Rather, he wrote a novel call’d The Stubborn Way, about the four years after high school he spent working in a paper mill in Kalamazoo.) Though: I find Spahr’s a rather untoward (disingenuous) claim next to the kind of Internet writing (“arrive by modem, write a poem, leave by modem”?) that crops up regularly in the book, lists of species migrant or invasive, anatomical parts of the heart, military Operations lists, &c. Surface textures, various enough, though perhaps not differing “all that much” from the sorts things one thieves off a brightly illustrated guide pick’d up at the Visitor’s Center.

My strong sense that a memoir (if one must write one, and increasingly, one notes, one must) ought to try to shape whatever life-tissue it puts under the lens, ought to examine lived experience with something like Montaigne’s Que scais-je? in the inquiry-hopper, some attempt to grapple with things. And my sense that Spahr’s attempt therein fishtails off out of control—too many variables, too much surface static, formal decisions that distract and flat-out the exploratory, rather than offering clarity. Nowhere moreso than in the “they,” the threesome at the center of the story—“They avoided words to describe their relation because words felt wrong.” Words do out—“zombie,” “pervert”—not even private Stein-mimicking “code” words, but the socius’s own crass vocabulary, words that finally only seem coy, a tease and avoidance, unwillingness to examine that part of one’s life, though Spahr claims it as central. One learns little of anybody’s autonomy (solitary feelings, difficulties, adjustments) in the group beyond metaphorical stabs (mostly glean’d off the TV): “They did not know what to make of how it felt reassuring to watch on public television the female hedge sparrow vigorously shaking its tail feathers at two different male birds to indicate their desire to be inseminated by each of them in close succession . . .”

Relatedly. One thing that’s funny is to see how quickly the Doxa-apparatus shifts into gear within the “avant-garde” (or howsoever one wants to label it). That is, how suddenly the work of some individuals is push’d up into the exemplary light unmottled. Thus, in a posting just last Friday, Ron Silliman is able to say with no apparent discomfort that Spahr’s book is “the midcareer masterpiece of a poet in her prime, a text that situates precisely at the intersection between memoir, essay and the prose poem.” The sort of pronunciamento, fait accompli, which saves all of us the energy of thinking and reading and discussing merits and alternatives, &c. Think how amusing I find it to read that very evening Spahr’s account of what I’d identify as the post-9/11 warmonger trio of Silliman, Marjorie Perloff, and (probably) David Antin:

At this time the world felt divided between two types of humans: they who wanted an end to killing and they who wanted even more killing. And because some they had respected or at least had seen for years as having a certain political sensibility such as a poet who was a self-proclaimed lefty who had been involved in grassroots organizing for years, a critic who was devoted to work that used fragmentation, quotation, disruption, disjunction, agrammatical syntax, and so on, another poet who was prickly and intense in their hatred of hierarchical systems, were all calling for more killing very vocally in various e-mail messages to various discussion listserves or in letters to the editor of various prominent newspapers, they didn’t know as a result who they were, who they could trust.

A remark that snaps (doglike) both ways—toward both the “self-proclaimed lefty” and cohort, and back at Spahr herself (I find that “they didn’t know as a result who they were”—even considering how it’s clad in faux-naïve, particularly depressing). Sign of a hierarchic-gazing, sign of lineage-malady, sign of entirely too little individual integrity (or wider perspectives—“They rarely widened their perspective or used their peripheral vision”) in the “avant-garde” groupuscules that inhabit “our” particular era.

Bandwagon-jumping. (Incidentally, one wonders why Silliman himself—and hundreds of others—avoid making a list for Steve Evans’s Attention Span: the invite is open, the terms of engagement innocuous, scrupulously noncommittal, apolitical. I think the wording asks for “a list of up to eleven titles (poetry and otherwise, recent and rediscovered) that have engaged [one’s] attention since this time last year.” An “ever-changing constellation of interests.”

According to Montaigne, one gets consubstantial with one’s book,
Like a tin of ‘greasy French viand’ empty’d over a plate of rice.