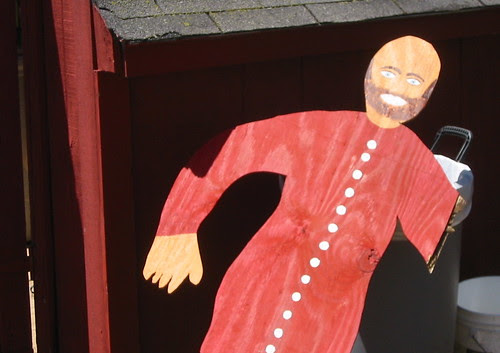 Methinks—vaguely, inchoately, ineffectual sweep of the feather-duster—Ron Silliman’s rather too pleased with the nomenclature. Zen Cowboy, trying to rectify (repeatedly) what Donald M. Allen probably lump’d together in an evening with amanuensical help of a scotch and soda, Barney Rosset hurrying the chore along (or offering little semi-annoying ritardandoes and interrupts) telephoning every half hour. Isn’t that how introductions get writ? Shouldn’t somebody remove that book out of Silliman’s grasp? (I am remind’d of a reader’s report for my first book, Rubbing Torsos. Something about language being like a loaded pistol in the hands of a boyo.) And the lines about Whalen (along with Kyger, Berrigan and Creeley)’s being possibly “the definitive generation of American poets, not just of the 20th century” because, “after all,” they were ”the American poets right at the moment when this empire peaked”—buncombe. Since when do poetries align with empires? One’d pray the opposite’d apply. That, against the death-throes of imperial self-masticatings, poetry’d sound its alarums, klaxon out its warnings. Silliman’s foolish Zen Cowboy monicker, though, is a hoot, particularly in the attempt’d Zukofsky integral of “Whalen at one end, Ed Dorn at the other, one all Zen & no cowboy, the other just the reverse.” As if there’s an ant’s forefoot’s worth of evidence that Silliman’s got any understanding of Zen or cowboys. Here’s Thoreau:

Methinks that these prosers, with their saws and their laws, do not know how glad a man can be. What wisdom, what warning, can prevail against gladness? There is no law so strong which a little gladness may not transgress. I have a room all to myself; it is nature. It is a place beyond the jurisdiction of human governments. Pile up your books, the records of sadness, your saws and your laws. Nature is glad outside, and her merry worms within will erelong topple them down. There is a prairie beyond your laws. Nature is a prairie for outlaws.

That out of a new book titled I to Myself: An Annotated Selection from the Journal of Henry D. Thoreau (Yale University Press, 2007). (It’s too annotated: for example, “prosers” is defined, “Tedious writer or talker.” It is poorly designed: the journal entries falling into the gutter whilst broad half-pages of white space get reserved for the marginal notes. It is not what is needed: what is needed is a paperback (cheap) series of all of the Journal, without the scholarly apparatus of the Princeton hardcovers.)

When I returned to town the other night by the Walden road through the meadows from Brister’s Hill to the poorhouse, I fell to musing upon the origin of the meanders in the road; for when I look straight before or behind me, my eye met the fences at a short distance, and it appeared that the road, instead of being built in a straight line across the meadow, as one might have expected, pursued a succession of curves like a cowpath. In fact, it was just such a meandering path as an eye of taste requires, and the landscape-gardener consciously aims to make, and the wonder is that a body of laborers left to themselves, without instrument or geometry, and perchance intending to make a straight road,—in short, that circumstances ordinarily,—will so commonly make just such a meandering road as the eye requires. A man advances in his walk somewhat as a river does, meanderingly . . .