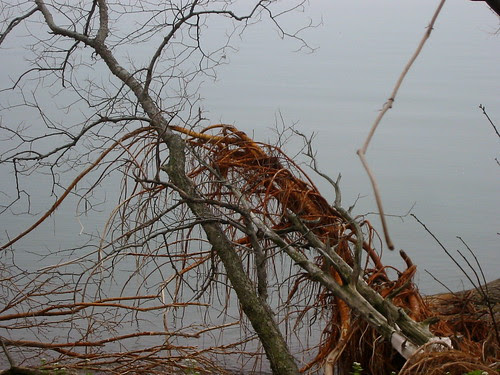 Nate Dorward of The Gig recently sent me a copy of Trevor Joyce’s fat collection What’s in Store, co-publish’d with New Writers’ Press in Dublin. And, reading around in its strange and bold and marvelous pieces, pieces that seemingly sprout out of nowhere, that exhibit incredible variety, that often enough seem spoke by ancient voices up out of the boggy penetrable earth, I think how what one cannot speak of, one calls genius, or quotes too lengthily. A majority of the pieces lack titles, or seem to lack titles, and even consulting the two tables of content (one, sparse, in front; one more detail’d in back), it’s occasionally difficult to tell what’s part, what’s not. So that: a smeary continuum is hint’d at (cover copy talks of eight years’ worth of work—completed since Joyce’s with the first dream of fire they hunt the cold: A Body of Work 1966-2000—here shaped into “a continuous booklength structure”). Example. One’d want’d, astonish’d, to quote a piece (in WCW “variable foot” step-down six-line stanzas, untitled) beginning page 236—but. Reading the “expanded view” contents, what one sees is:

As man, in deep and level sleep, periodically draws a long inspiration, song is learned and figured in the brain. Think of the way a musical box, wound up, potentially represents a slow or lively air.

Clothes, however thick, diminish little the sonorities of breath. Touch the stop and the air sounds out; send an impulse along the proper afferent nerve and voice starts on song. Succussion, too, may raise a splashing sound much like the respiration, voice, and tinkling. Odd.

Garments of silk, or thin dry wool, also give rise to a noise calculated to cause error, sometimes mitigating the production and carefully controlled cropping of live creatures for high ends. Else, from every corner of the woods and glens see them come creeping on their hands, for their legs cannot make fast, as in humans the larynx migrates down the neck since the age of eighteen months, from which arises the sound of voices. In time these come to speak of a political meeting, of market shares. Someone tells of a woman who murdered her lover. “A chauffeur kills his wife,” says another. All teetotallers like sugar. No nightingale drinks wine. Go figure.

The respiration of the plumpest child is louder clothed than of the thinnest adult frame stripped down. The throat is delicate and worthy to be protected. Says who? Whose voice? What proof is there these brutes are other than a superior race of marionettes, which eat without pleasure, cry without pain, desire nothing, know nothing, merely simulating true intelligence, for all it has been said that emotions stir within, they take form in words?

To be included here is the agopithecus, an ape-like goat whose voice is very like a man’s but not articulate, sounding as if one did speak hastily with indignation or sorrow, as here, where one such encounters in the woods a boy: “What’s that you have?” The boy holds it out. It is a toy, a bear. A teddy bear. The boy’s eyes are large, but without expression. “I don’t want it, keep it.” The boy hugs the bear again. A house takes fire. Later comes the writing of authorizations and designs on shop window tickets, and of inscriptions too private to allow printing.

In women who are both grown up and fat, the respiration is often audible with great force, even through the breasts. When your raptors are at fault, prevent all speech: let such as follow them ignorantly and unworthily, stirrup all aloof, for whilst such are chattering, none will hunt. A-propos, Sir, a politician will say: “What news from America?” A-propos, “Do you think both the admirals will be tried?” Or, a-propos, “Did you hear what has happened to my grandmother?”

Such rustling sensations are nothing else than a purring-thrill, an when this co-exists with the sound of the bellows, rasp, or file we may be assured others will soon resemble anatomies of death, like ghosts crying out of their graves, and will eat the dead carrions, happy where they find them, and the very carcasses they spare not to scrape back out of their deeper sleep.

Ticket writers may proceed to designs for posters when they can name their own figure. The illusion of experience, as a rule, begins by filling in provided letters with paint, and later gets on to the proper writing and lettering. Attendance at technical classes would be useful in order to bring up a good style of writing with some originality.

A dull but strong sound like that produced by a file on wood has something harsh in its sound. So, other boys start as heaters, then exercise as rivet-carriers, holders-up, anvil-hands, and lastly platers. Hear the whizzing sound of the left auricle.

Caution: Boys are often required to stand inside the chamber, as supporters, which the men pierce, and then hammer it outside, and deafness is apt to result. I found one who had abandoned his laborious occupation and gained an easy place as servant to a priest.

Work with letters may be done sitting without difficulty and is quite suitable for cripples. The trade is not a large one.

and thereby
put by
for a secure
old age
a tidy
sum,

for he might yet
have to pit
a warrant
’gainst a blackjack,
drag
his doll

with teats
hitched,
not as the fastidious
permit,
but heaved
in fullest view

by a snurting,
as if some crack
ensemble
had outrageously
let
fly

against all
refined
precedent
when we would have
some prudence
hinder her.

“Rear
exit and begone,
my own
exhibitionistic pet!
Let’s catch
the track

will lead us
to our train
of state,
then venerably
process.”
“A chorus

we must have
to free ourselves
of drills
and drawbacks,
trials
and tribulations.”

that by a snifting
clack
the air
is expelled
from the
pickle-pot.

The title, “De Iron Trote,” I find is local reference to the Cork Eye, Ear and Throat Hospital in the city of Cork, where Joyce lives. What’s stunning here is the reach of the registers, the demotic intertwined with the proverbial, a kind of trade school technical up against sudden medical precision, and a sneaky sense (the language cocking an eye-wink at the reader) that some good bit of it is all rather an extended blague, a cheery stand-in for what is (partly, at least) a story about writing itself. One thing that is evident immediately is how “trustworthy” the writing is—in the mirey and exhilaration of “not knowing,” one is perfectly happy to follow along. Arriving at the gaseousness “expelled” out the pickle-pot ends the piece with something akin to a nudge in the rib, a stinker’s been loosed, all the “inspiration” (breath) of song, all the metallurgical hammering inside the heart, all that amounts to a little flatulence finally, and a good joke after all.

Joyce’s range is phenomenal. The book opens with a lovely set of tiny things, the “Folk Songs from the Finno-Ugric and Turkic Languages,” work’d up out some rudimentary literal versions. Here’s one:

A birch tree
bends on the hill.
For a plough, girls chop
a handle.

That moustache,
is it your first?
For caps, girls braid
fine tassels.

Which seems to catch that particular moment of adolescence when the girls’re outstripping the boys and there’s a combo of taunting and impatience and self-reliance going on amongst them. Too, Joyce reworks a series he calls “Love Songs from a Dead Tongue,” out of fifteenth (and earlier) Irish originals, and a series of “some of the surviving poems by Juan Chi (pinyin Ruan Ji, 210-263).” The upshot of the threading through of translations and versions is a splendid estrangedness, where the alien flips into customary, and one’s happiest reading the song of a horse:

How happy the life of a horse! Hey!
Till the end when they mock him
and whip him and kick him,
and for Purgatory sell him to gypsies.

Thirty years I served one man,
hauled his harness like a colt,
now I’m old I’m down and done for,
corn-stalks hurt my gums.

Smiths and farriers rot in hell!
Your tackle was the death of me,
they broke my head, they stole my skin,
now sheep dogs sniff my meat.

One final piece of something. A longish (actually only a half-dozen pages or so) impenetrable looking piece call’d “Stillsman” is placed about at the book’s center. It looks (and begins) like this:

Right down to the Copperplate Gothic caps. (Reading it, it seems as if birds, referenced often in the pages, begin to twitter in one’s head—though I am almost certain it is an effect of the skittery type . . .) I include it mostly as indication of Joyce’s restlessness, or maybe rambunctiousness, that willingness to try anything that is a terrible earth-defying strength, a freedom-granting “fix.” As Joyce puts it in a fragment:

Say, why
should I
experience
nostalgia
for the forms
of men?

How,
rid now
of all familiar
fixes,
slough
my self? 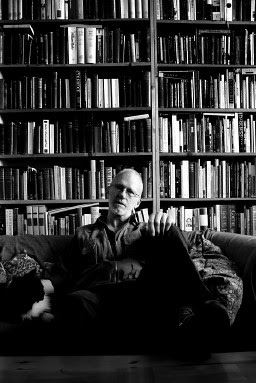