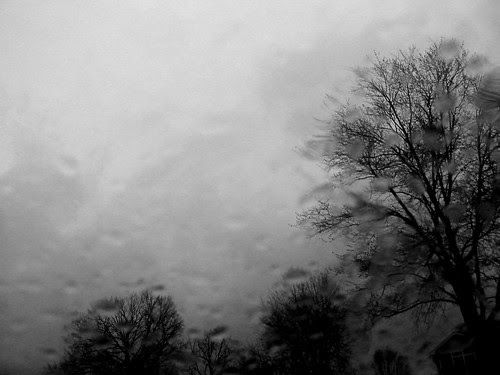 Thinking huevos rancheros, thinking blue-winged warbler, thinking the half-moon hanging like a thumb-smudge in the south. Finish’d the big Bolaño and steam’d straightaway off up the tributaries (stories—some wherein Arturo Belano, Bolaño’s unmistakable “other” shows up, skinny and long-hair’d, smoking magnificently and inexorably a brand call’d Bali). And fuss’d in some backwaters, millrace channels, stray puddles of print. As one is “wont.” Found an odd echo-y triumvirate of things. Writings about things in illimitable thing-ness, un-quash’d by human hoot. Out of Peter Riley’s The Llŷn Writings (Shearsman, 2007):

Deft sonnet, lines to pound the table with (Khrushchev with shoe)—“Axle, roller, valve, beam, plate”—and the “human hoot” so overwhelmed by junk “erratic,” it becomes something wholly equal to, and parcel of, it all. Sopped up by debris and coagulate. Something “Chinese” in the self’s obliterating. In another Riley book, the simultaneously-released The Day’s Final Balance: Uncollected Writings, 1965-2006 (Shearsman, 2007), he writes, amidst a flurry of tiny pieces:

Leaving a scatter of uncompleted projects
Rusting in the hilltop grass.

That delicate refusal of assertion. Leaving the world to things.

Francis Ponge. Quoted in Gerald L. Bruns’s On the Anarchy of Poetry and Philosophy:

I write as I write, and I do not want it to be poetry. I do not intend to write poems. I express my feelings about things that move me, or that seem to me to be important to state. I have protested at length against my classification among poets, because lyricism in general disturbs me. That is, it seems to me that there is something too subjective, a display of subjectivity which appears to me to be unpleasant, slightly immodest. I believe that things—how can I say it?—that emanate from your subjectivity should not be displayed. Naturally, one never does anything but that. My own resolution was rather to reverse the situation and to try to say things that were generally valuable and pertinent. That is the reason why I have chosen things, objects, so that I would always have a break on my subjectivity, calling back the object as it exists when I write about it.

Though, oddly enough, the first Ponge piece Bruns offers up moves rather less by means of things and more by means of the names of things, that is, the way niggles of orthographical difference may subsume thingness itself in (by) language. See:

Halfway between cage [cage] and cachot [prison cell] the French language has cageot [crate], a simple openwork case for the transport of those fruits that invariably fall sick over the slightest suffocation.

Which (though the piece continues) already seems a little finicky, precious, some human intrusion mucking up that crate with sentiment, poor sickly plum!

And César Aira, the Argentine, writing about the German artist Johann Moritz Rugendas (1802-1858), the landscape painter dubbed (according to Aira) by naturalist Alexander Humboldt, the “founding father of the art of pictorial presentation of the physiognomy of nature.” In An Episode in the Life of a Landscape Painter (New Directions, 2006), translated by Chris Andrews, Aira records Humboldt’s instructions to Rugendas on the occasion of the painter’s second voyage to South America:

Do not squander your talent, which is suited above all to the depiction of that which is truly exceptional in landscape, such as snowy mountain peaks, bamboo, tropical jungle flora, groups composed of a single plant species at different ages; filiceae, lataniae, feathery-fronded palms, bamboo, cylindrical cactuses, red-flowered mimosas, the inga tree with its long branches and broad leaves, shrub-sized malvaceous plants with digitate leaves, particularly the Mexican hand plant (Cheirantodendron) in Toluca; the famous ahuehuete of Atlisco (the thousand-year-old Cupressus disticha) in the environs of Mexico City; the species of orchids that flower beautifully on the rounded, moss-covered protuberances of tree-trunks, surrounded in turn by mossy bulbs of dendrobium; the forms of fallen mahogany branches covered with orchids, banisteriae and climbing plants; gramineous species from the bamboo family reaching heights of twenty to thirty feet, bignoniaceae and the varieties of Foliis distichis; studies of pothos and dracontium; a trunk of Crescentia cujete laden with calabashes; a flowering Teobroma cacao with flowers springing up from the root; the external roots of Cupressus disticha, up to four feet tall, shaped like stakes or planks; studies of a rock covered with fucus; blue water lilies in water, guastavia (pirigara) and flowering lecitis; a tropical jungle viewed from a vantage point high on a mountain, showing only the broad crowns of flowering trees, from which the bare trunks of the palms rise like a colonnade, another jungle on top of the jungle; the differing material physiognomies of pisang and heliconium . . .

Which subsumes by sheer herbescence (and verbiage)—“jungle on top of the jungle”—leaving a kind of wall of greenery impenetrable by human concern. Jungle objectivism.