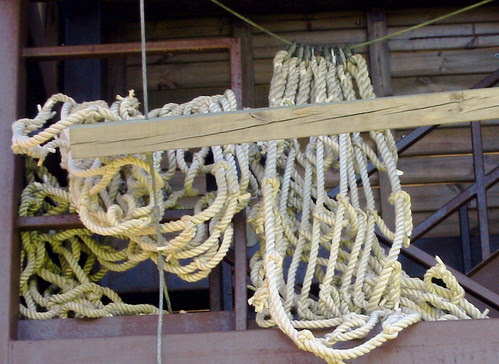 “As a writer he cultivated haste”—so writes somebody (John Sturrock) about Stendhal, particularly with La vie de Henry Brulard. (Though fifty-three days to write The Charterhouse of Parma—pas mal du tout, “too.” Or, “either.”) The snatch’d off memory, the spasm, the sketch. And, completed, one stops: “The imagination flies off elsewhere: this work is broken off.”

Sitting here thinking about restlessness, the way what triggers the writing—my writing—is movement, off to the coffeepot for a refill, or longer, out to gumshoe the neighborhood, looking for the hint that, like any engine, seizes up de temps en temps up in the cerebral zones. (“Hint”—there’s one for the logomachists, out of the archaicism hent, “to lay hold of, seize, grasp,” seemingly of the Old English hentan, though a necessary black obscurity therein seizes up the vocalic night whereby words ditch they origins and sprint into the hinterlands of grunt and unstomach . . .)

That sputtery nothing that’ll fire just enough to provide light to read something into what’s not there: that’s the way to begin, no? “We” were talking about the discomfit’d engines of movement, and how the legs make the neural synapses bray out loudly, daft hinnies to the word (“Both the mule and the hinny resemble more closely the ass than the horse.”)

Uncountenance’d I am so clearly by the interrupt that hoicks up unbid—that too-chummy adamant “broker” ringing the telephone just now—I am entirely capable of being “so thin and vinegary, so French” (Stendhal) I announce to myself after that, though I had it “thin and turpentiney,” so wrongly. Better than “so thin and paint thinner-y,” “I” “booger” “forth.”

I love the bravado (and whimsy) of Stendhal here:

I learnt English only many years later, when I invented the idea of learning by heart the first four pages of the Vicar of Wakefield (Ouaikefield). This, I fancy, was around 1805. Someone had had the same idea in Scotland, I believe, but I didn’t find that out until 1812 when I got hold of some Edinburgh Reviews in Germany.

What an odd duck. Reminds me of some of “our own” grey eminences, the way they mulishly insist on having attend’d (if not spark’d) much of the, uh, original originating (mostly in the hothouse of California), and all with the uncannyily depressing time provincialism of the barely-historical.

Or, trying to find a way out of provincial Grenoble, where he’d begun (b. 1783), a teenager amidst the upstart Napoleonic gabble, dying to get to the capital (I generally distrust anybody who’s “dying to get to the capital”—I’d rather be quizzical and frumpish around the dumpsters in Nowheresville, all the best things happen inside one’s flaming head anyhow.) Stendhal:

I remember almost nothing from the last two years, 1798 and 1799. My passion for mathematics took up so much of my time that Félix Faure has told me I then wore my hair too long, so much did I begrudge the half-hour I would have had to waste getting it cut.

Stendhal’s motto and mode de vie: “se foutre carrément de tout,” to give exactly fuck-all for everything. He claim’d something he call’d espagnolism “prevents me from having the comic genius: 1. I avert my gaze and my memory from anything low; 2. I sympathize, as at the age of ten when I was reading Ariosto, with anything in the way of tales of love, of forests (woods and their vast silence), of generosity”—“If there is generosity in it, the most commonplace Spanish tale brings tears to my eyes . . .” Hints of a hinny. As a youth, he took acting lessons in order to overcome debilitating timidity and “acquire the technique of appearing ‘natural’!”

Aw went up the Butcher Bank an’ doon Grundin Chare,
Ca’d at the Dun Cow, but aw cuddent find thee there.

Dismal stuff of sodden thick-lipped mewlers, and endless. One is left to imagine what “standin’ p____n’” means—some kind of acrobatic micturating hinny?—and the joy of it’s in the ending: “A’me sorrow’s ower noo av’ve fund me hinny.”

Stendhal in 1839 by Pierre Dedreux-Dorcy