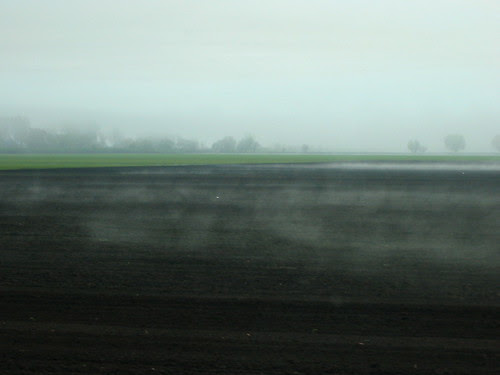 In the thick forest where the Kaluli live, at the base of Mt. Bosavi in Papua New Guinea, it’s hard to see far and space is mapped by sound:

That’s how one of the essays (“Where the Kaluli Live”) in Eliot Weinberger’s marvelous new book, An Elemental Thing (New Directions, 2007), begins—plunging one amidst (too) the sound (“deh     deh     deh deh     deh”) of “the sucking of the bats eating fruit.” Ripe territory for my recent thinking about John Clare and the transliteration of nightingale noises. Weinberger:

The Kaluli language is called Bosavi—named for the mountain, the collapsed cone of a dead volcano—and some of the birds speak it. The Black-breasted Woodswallow calls bas-bas bas-bas, “brother in law,” to the Uniform Swiftlet, meaning that it’s time to share food. The Black-throated Warbler says seeyo-gogo-bayo seeyo-gogo-bayo, “I’m staying right here.” The Chanting Scrubwren chants kaloo-yabe kaloo-yabe, “someone is coming.” The Brown Oriole, who is always female, has a foul mouth and insults the men passing by: koo-halaideh koo-halaideh, “what a hard cock.”

If one is tempt’d—reading that—to think the Kaluli quaint or primitive, one need only turn to the norteamericano field guides. By chance, there exist two black-throated warblers in North America, one “green,” one “blue.” (Certainly not identical to the Kaluli bird, likely not even kin . . .) According to Roger Tory Peterson, the voice of the black-throated green’s “A lisping dreamy zoo zee zoo zoo zee or zee zee zee zee zoo zee, the zee note on same pitch, the zoo notes lower.” Gibberish, though it’s “not impossible, not likely” it’d mean something in Bosavi. The black-throated blue though—in American English—apes the sluggard Bosavi bird. Peterson: “Song, a husky, lazy zur, zur, zur, zreee or I am la-zy (with a rising inflection).” And one need only browse a few pages to see how equally conversational the North American birds be: the chestnut-sided warbler with its ‘I wish to see Miss Beecher,’ or ‘please please please ta meetcha.’ Culturally determined natural history.

Two more slivers out of Weinberger’s essay about the Kaluli, for the joy of it:

Human songs are bird songs, and the words of a song are called “bird sound words.” They are “turned-over words,” words that are comprehensible but unlike anything in the spoken language, words that have a meaning underneath, on the other side.

A great singer has a voice like a Pink-spotted Fruitdove or an Orange-bellied Fruitdove. The singer is a bird at the top of a waterfall, and the structure of a song is a waterfall. Songs that are poorly done have too much ledge before the water drops, or too much splashing, or they linger too long in the pool before moving on. A successful song is like water rushing over the rocks, and is one where the water keeps flowing far beyond where one can see.

A kind of Strunk & White for the Bosavi, that. Akin to the common reproof, to keep the writing “clear.” To avoid language that draws attention to itself. To empty the signifier of all its tangible squawking materiality. How to do that with “bird sound words”—that, naturally, must call attention to themselves, “unlike anything.” Crux of a tension-fraught poetics. (All poetics are “tension-fraught.”)

Odd night-revery of crawling inside a hollow log, hiding in a woods in France. Cache-cache. Somewhat “later” agreeing to purchase a dirt bike the size of a beagle. The size of a wastebasket. The size of mailbox. The size of an overnight bag. The size of a dictionary. The size of an antimacassar, I think you mean ottoman. And “later” being angrily instruct’d to remove the tin tag attach’d to the dirt bike key, it being a possible carcinogen. “Later,” a man in the queue with an octagonal edition of what look’d like the big second Webster’s . . . Why are you bothering to read such imbecile fatuity?

For the birds they are, those night-reveries . . .

“A one hundred by one hundred kilometre stretch of tropical rain forest in central Papua with the eroded volcanic cone of Mount Bosavi rising more than two thousand metres above the surrounding plain.”