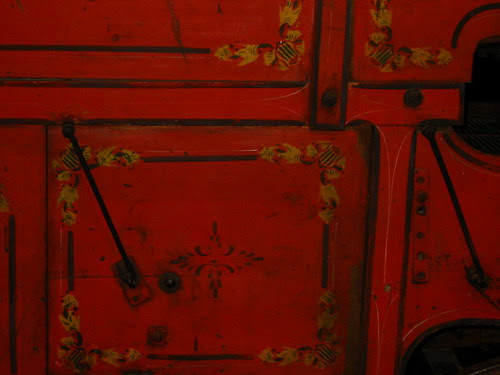 . . . there were at least seven published in Chile between 1973 and 1980 that he had never heard of. In one of them, Sunflowers of Meat (No. 1, April 1979), Wieder, under the pseudonym Masanobu (not, as one might be forgiven for thinking, a Samurai, but the Japanese painter Okumura Masanobu [1686-1784], discoursed on humor, the sense of the ridiculous, the atrocity of literary jokes, whether or not they draw blood, the private and the public grotesque, the laughable, gratuitous excess, and he concluded that no one, absolutely no one, had the right to pass judgment on the minor works that are born of mockery, develop through mockery and die in mockery. All writers are grotesque, writes Wieder. All writers are wretched, even those who come from well-to-do families, even Nobel Prize winners.

Is it impenetrable Jacques Lacan or naked in the Mexican desert Dennis Hopper who says, “All naming is already murder”? Later, Bolaño’s narrator grinching about something one sees “everywhere” now and again:

This is my last communiqué from the planet of the monsters. Never again will I immerse myself in literature’s bottomless cesspools. I will go back to writing my poems, such as they are, find a job to keep body and soul together, and make no attempt to be published.

Bottom feeders versus surface scum-skimmers, one teeter-totter. That seesaw between rumbustious bile and horsewhip’d phlegm. One’s need to duck in out of the rain, one’s need to sit mildly, in high amusement, reading the Nabokovian doppelgänger (and humdinger) titled Slaughter in the Sun.

THESE WHITISH BUSHES SEEN FROM THE WINDOW
clematis or snow. Am looking forward already to communal
days and lyre-playing moonlight, when writing poems
completely cocooned in the Holy, the Benevolent,
explosive joys within me. While the letters rot
when it rains, in the letter-box. As fine as hair
peony-window full of streaks and scars, the
world collapsed.


I’m thinking of you

1 emotion : I’ve bought Pascal
the beloved cur is painting yellow on white
in the snow-bound park. Abruptly the crystalline
sun in my eye, in the anteroom 1 creaking, I’m thinking of you,
in the dark one confuses them in the tangled forest,
as Leibniz says, writes EvS, 1
BRAIN-READING (familiar), I’m thinking of you, I
wake up with the word swotting off, then my blood-pressure
the blood-pressure-measuring-device hops across like 1
sm.threshold : obstacle bulwark and brunt,
1 agave with pollen so powerful and heavy that
the sprouting of the blossom-stem . . says Sabine H
on the phone, I find myself in the bakehouse, am
beside myself, I’m thinking of you, am deeply steeped
in that sanctity. He threw me up the stairs,
this dial : this loneliness, how it
creeps up in the evenings when I break out,
into the murk, we people only consist of writing,
I’m thinking of you, with love of humanity coursing through me

two tufts of hair between
the book’s pages, black, a
white bird-feather there too, on their
bicycles three young chimney-sweeps
rowing through the December rain, the open
bodies on meat hooks inside
the refrigerated lorry, alongside, on the floor of the
cab, a fir-branch

Some remind me of Bernadette Meyer, some remind me (sparsely) of Joseph Ceravolo, both, undoubtedly, false etymologies, skew’d impossible lineages. “Of the international graphomaniac tradition.”