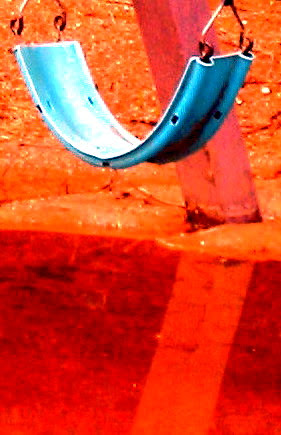 Thinking how dilapidatedly the tulips, white, sprawling, go about dying, thinking final joke, thinking “prodigious bicycle races.” If I fuss with “other” writing all through the boot’d up hours of night, what to offer day (in its gruesome guise of a monarch), day demanding its feeding? I scoot under the crabapples, pedaling madly, thunderclouds sniggering behind my back, and a little shower of pale petals whutters down to earth.

Susan Sontag, writing about Tsvetayeva, says: “The flow of rhetoric reaches the precipice of the sublime and topples over into hysteria, anguish, dread.” Isn’t that what “we” all desire? Not the toppling, the skirting of the precipice? (There’s, too, that old (1949) Stevensesque lozenge of horehound candy: “The poem must resist the intelligence / Almost successfully. . .” That’s a little different. Here, the writer must resist blithering idiocy almost successfully. See, too, various recent notes “on” one’s longing to splutter about in waves and currents of “pure sound.”) Gerald L. Bruns, in On the Anarchy of Poetry and Philosophy:

Prose knows itself in knowing what it can do: it is a project of world-making in which the writer first of all makes himself real (if himself is the word) by becoming immanent in his effects. Poetry meanwhile does not use words; it contemplates them from the outside as if they were things—but to what purpose? There is a good chance that poetry does not know what it is, much less what it is for. It cannot be traced back to a reason. It is very likely a condition of what Hegel called “unhappy consciousness [unglückliche Bewußtein]”: It exists in the form of a question, inaccessible to theory or redemption, divided against itself (without identity), opaque, gratuitous, and unwirklich.

Probably explains the trance-state “I am a radio” effect of its transmission down out of the god-wrack’d heights and out through the body of the poet, “pinned and wriggling on the wall.” Which is where the world-changing aims of the avant-garde go a little dicey—how’m I going to effectuate anything with this inexplicable thing-made-of-words coursing so voltaically through me? (The only recourse: that each and every one of “us” get the voltage, turn into dynamos, make a leap.)

Thinking breech in the flame. Thinking of Tzara writing to Breton: On écrit parce qu’il n’y a pas assez d’hommes nouveaux, par habitude, on publie pour chercher des hommes et pour avoir une occupation. Et même cela est très bête. [Roughly: One writes because there aren’t enough new men, habitually, one publishes to search out men and to have an occupation. And even that is very stupid.] Thinking how César Aira writes (in How I Became a Nun): “Life without radio was inconceivable for me. What happens, if you decide to define life as radio (which, as an intellectual exercise, is not entirely without merit), is that it automatically produces a sustaining plenitude.”