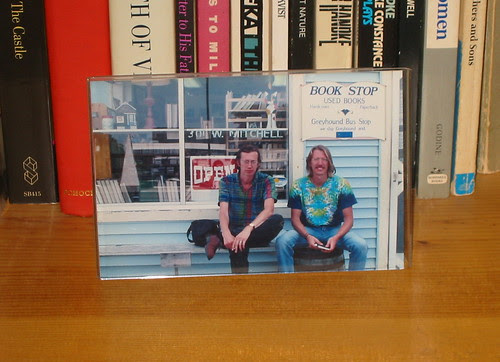 Is it curious that Michael Hofmann, of German parentage (father: novelist Gert Hofmann), raised in England, in the introduction to Twentieth Century German Poetry (Farrar, Straus and Giroux, 2006), considering “Who had the best poets in the twentieth century?” leaves out the French? (Probably not. Just troubling to my own Francophilia. How little I know about the Germans!) Look, here’s Hofmann’s answer:

For their size of population, the Irish and the Poles, absolutely, without hesitation. And under open rules? Well, then it’s more like the usual suspects, the Americans and the Russians, the Spanish (particularly if you throw in Latin America)—and (beefed up by the Austrians and the Swiss, and a few Czechs and Balts and Romanians) the Germans.

He adds—for us doltish glib self-center’d Americans—“If you’re a monoglot in English, you have to struggle mightily to make your Mercator look any better adjusted or more adequately representative that the famous New Yorker map of the States.” If the greatest periods in any literature are famously trigger’d by, or coinciding with, periods of rampant translation (as opposed to mighty-mouth’d insularity and “schoolishness”), then this Hofmann-edited anthology ought go a ways to kick off a revival.

Hofmann’s unapologetic in assessing German strengths. Rilke’s a kind of standard (to the Americans at least; apparently Rilke’s overwhelming popularity here collects no little incredulity elsewhere). Brecht, Hofmann argues, “took poetry into the twentieth century.” He is “its single most crucial figure” in Hofmann’s eyes. “I’ve come to think, without Brecht, would there have been poetry as a living counter-force in socio-political reality, where else would the poetry of dissent and fear and protest and rebuke and pleasure have ever begun?” And:

Unlike, say, T. S. Eliot or Paul Valéry or García Lorca, the idea of Brecht is heartening even if you have never read him. He represents utility, and private opposition; “Seid Sand, nicht das Öl im Getriebe der Welt” (“Be sand, not oil, in the machinery of the world”), as Günter Eich famously and Brecht-ishly said.

Hofmann quotes Brecht’s “Motto” (“In the dark times / Will there also be singing? / Yes, there will also be singing / About the dark times.”) and suggests: “If I were a poet in Asia or Africa or Latin America, he is the one “old world” poet I would go to. He synthesized, improbably, Kipling, Rimbaud, Waley, the Bible and later Horace to make something uttterly and radically new.” Certainly a conglomerate worthy of Pound.

I recall two things with some bearing on German poetry in the last century. One is how Günter Grass claim’d (of a condition that exist’d for more than forty years, the Wall—it, grafitti’d American-subway style, “graces” the cover of the book—), Grass claim’d that Berlin more than any place in the world represent’d the socio-political realities of the century. If so, it’d make sense that whatever writing emerged out under it—or nearby it—’d carry a notable tincture of the era. The other thing: the terrific Wim Wenders film Im Lauf der Zeit (1976), a road movie of sorts, a movie-house projectionist repairman trundling through small burgs along the East-West border, with a younger, distress’d man, an on-the-run sort—he’s shown in the opening shots driving a VW beetle at excessive speed around and into a lake—apparently in a self-destruct urge: shallow lake, car conk’d out, sheepish shrug of fellow climbing out. The line I recall, at the end: the younger man in some no man’s land looking into East Germany, listening to American rock ’n’ roll on the car radio, says something like: “The Americans, they’ve even colonized our subconscious.” There are now how many places in the world wherein that, precisely, is the case?

(Since I am drifting, I’d like to make the argument that the imperium writes naught of excellence. The imperium consumes itself in various internecine frenzies (and manic exportation, everywhere and obligingly) and—without tending to whatever meagre goods—writing—makes its way in, becomes sere, unrefulgent, pitiable, limp.)

Because I love the alignment of “micturate” and “bawl”—the high Latinate down to the near Saxon grunt—in Hofmann’s translation of Brecht’s “Of Poor B. B.”—I’ll put that here, in a hurry, sort of dud curio, a “review” of a poetry anthology with no poems, no?

1
I, Bertolt Brecht, come from the black forests.
My mother carried me into the cities
When I was in her belly. And the chill of the forests
Will be in me till my dying day.

2
The asphalt city is my home. Furnished
From the outset with every sacramental perquisite:
With newspapers. And tobacco. And brandy.
Distrustful and idle and contented to the end.

3
I am friendly to people. I put on
A top hat because that’s what they do.
I tell myself: They are animals with a particular smell.
And I tell myself: What of it, so am I.

4
In the morning I like to set a woman or two
In my empty rocking chairs
And I look at them insouciantly and I say to them:
In me you have someone on whom there is no relying.

5
Towards evening it’s men I gather round about me
And we address our company as “gentlemen.”
They park their feet on my table
And say: Things are looking up. And I don’t ask: When?

6
In the grey pre-dawn the pine trees micturate
And their parasites, the birds, start to bawl.
At that hour I empty my glass in the city and throw away
My cigar end and worriedly I go to sleep.

7
We have settled, a whimsical tribe,
In dwellings it pleased us to think of as indestructible
(In the same spirit we built the tall constructions on the island of Manhattan
And the thin antennae that underwire the Atlantic Ocean).

8
Of these cities there will remain only what passed through them, the wind.
The house makes glad the eater: he polishes it off.
We know we are provisional,
And that after us will come: really nothing worth mentioning.

9
In the coming earthquakes I trust
I will not let my Virginia go bitter on me,
I, Bertolt Brecht, removed to the asphalt cities
From the black forest in my mother in the early times.