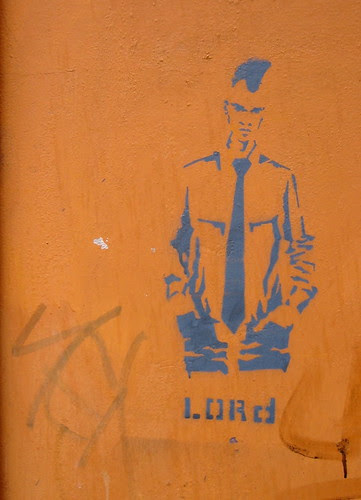 Preposterous rot out of the California revolutionary horde of one. “Talks.” Noxious presumptuous rot. “The professor who takes up the jargon of the revolutionary doesn’t achieve thusly a revolutionary’s consciousness, but simply uses that jargon as a professor would.” Ah, the patent and unrelieved narcissism of duly positing one’s own absence as a political act, and efficacious too!

Rather sit glumly with my single beer and read “Stabs at Bewilderment.”

Did not Diderot say, “A taste for the extraordinary is characteristic of mediocrity.” About the avant-garde and its meddlesome rank hankerers? Its socialites?

E. M. Cioran: “To think is to run after insecurity, to be demoralized for grandiose trifles, to immure oneself in abstractions with a martyr’s avidity, to hunt up complications the way others pursue collapse or gain. The thinker is by definition keen for torment.

Never comprehend the glee of tasking after the various whipping boys: lately, the Poetry bunch of rich snakes. Why rattle so the sabers about a dyspeptic and nigh-defunct codger like that? All groupuscules petrify: isn’t that what groupuscules are for? For institutional solace in petrifaction-time? And, relatedly, the idea of participating in a “gathering” of seven thousand or so writers? Druther, as un vieux pote d’antan’d say, get a new asshole drill’d.

Druther poke around in Coleridge the insane: “. . . my Peter Pounce who had just come from the Moon / 8 miles high / volcanos—people wear asbestos, & wash themselves in liquid Storax / Have their fire conducted into their houses by great stone pipes, as we have water / exactly like the people of this world in every thing else except indeed that they eat with their Backsides, & stool at their moiths / in consequence they are all sans-culottes, but then they are all cowled or veiled, a whole Planet of Nuns & Friars—their Breath not very sweet—but they do not kiss much & custom reconciles one to every thing /” (Notebooks, c. 1802)

How precisely apt to find, in the morning delivery, Theo Scratcher’s “How to Know the Poets”:

That a great head is an omen, or a sign of a sluggish Fool; a little head, of a subtile knave; a middle head, of a liberal wit; a round-head, of a senselesse irrational fellow; a sharp head, of an impudent sot.

That an hard hair signes, or ominates one valiant; and a soft hair, effeminate; and a thin hair, luxurious; and a thick hair, churlish; and a curled hair, covetous; and a plain hair, prodigal; and a white hair, timorous; and a black hair, violent; and a yellow hair, ingenious; and a red hair, treacherous.

That a great face signes or ominates an epicure; and a little face, a flatterer; a fat face, a sluggard; a lean face, one envious; a long face, injurious; a broad face, litigious; a round face, light; a smooth face, deceitful; a wrinckled face, distrustful; a red face, riotous; and a pale face, malignant.

That a broad forehead signes or marks a poet stupid; a little forehead, unconstant; an high forehead pertinacious, a low forehead, lascivious; a square forehead, bold; a round forehead, loud; a wrinckled forehead, thoughtful; and a smooth forehead, jocund.

That the eye-browes or lids, if they hang down, mark or note one intemperate; if thick, shamelesse; if broad, foolish; if little, crafty; if they bend towards the nose, austere and rigid; if to the temples, jeering, and dissembling; if long, arrogant; if thin, silly.

That great eares presage or note a foole; and little eares, a knave; and long eares, a babbler; and hanging eares, a clowne; and prick eares, a meddler; and red eares, shamefast; and plain eares, rude; and soft eares, easie; and hard eares, inexorable.

That a very great nose is a marke or figure of a poet that is given to admire himself, and deride all others; a very little nose, signes a poet mutable; a long nose, bold; a strait nose babbling; a crooked nose, crooked conditions; a thick nose, impudent; a flat nose, pretending; a bottle nose, dull; a hook nose, dissembling; a broad nose, churlish; a sharpe nose, teasty; a round nose, vainglorious; and a hawk nose, venereous; and a red nose, a lover of strong drink.

That thick cheeks betoken a vain trifler; and fleshy cheekes, a sound eater; and red cheekes, a notorious drunkard; and thin cheekes, a false treacher; and round cheekes, a wanton deluder; and smooth cheekes, an easie nature; and hairy cheekes, an harsh humour.

That thick lips fore-speak a foolish talker; and thin lips, a cunning pretender; a prominent upper lip, an injurious slanderer; and a prominent under lip, a vain boaster; an hare lip, a cunning cheater; a pouting lip, a peevish scold; a purse lip, a scraping sneak; and a blabber lip, a nasty slut.

That a little chin signes one envious; and a short chin, perfidious; and a long chin, loquacious; and a round and smooth chin, muliebrious; a dissected, and retorted chin, libidinous; and a square and hairy chin, valorous.

That a long tongue speaks a poet garrulous; a short tongue, dumpish; a broad tongue, liquorish; a narrow tongue, querulous; a quick and voluble tongue, rash, and hasty; a slow and drawling tongue, dull, and reserved; a stuttering or stammering tongue, ignorant, or but half witted.

That as the voyces of poets are great or small, high, or low, quick, or slow: so are they to be argued for angry, or gentle; true, or false; audacious, or timorous; modest, or impudent.

That to be facile of speech notes levity; and to be difficult of speech, morosity; short speech, notes passion; and long speech, affectation; to speak through the teeth, notes folly, and fantasticknesse; and through the nose, lying, and dissimulation.

That a long and lean neck, notes one for talkative, foolish, fearful; a short neck and fat, for rude, and voracious; a thick fleshy neck, for angry, and ireful; an hard neck, for indocible; a fat neck, for docible; a stiffe neck and immoveable, for pertinacious; a straight neck, for proud and contumacious; a crooked or wry neck, for penurious and malignant; a neck leaning to the right hand, for shamefast; to the left hand, for shamelesse.

That a sharp and narrow throat signes a poet light, and loquacious, a wide throat, voracious, or greedy; the bunch upon the throat, if it be outwardly prominent, signes a poet malepert; if it be inwardly contracted, it signes him difficult, and troublesome.

That a great breast is marking and figuring a poet strong, & magnanimous; a little breast weak and pusillanimous; a broad breast, wise and honest; a narrow breast, witty and subtile; a fleshy breast, timorous, and lazy; an hairy breast, libidinous; a smooth, effeminate; an out breast, unconstant; an hollow breast, deceitful; a red breast ireful; swagging breasts, drunken, and whorish.

That a great belly and fleshy shews one gluttonous, drunken, lustful, proud; an hard belly, rude and gluttonous; a soft belly, honest and magnanimous: a mean belly, prudent and ingenious; an hairy belly, lustful, light, instable.

That a great back is a signe of a poet strong and stout, and a little back, of one wretched, and timorous; a lean back witty: a fat back, lazy; an hairy back, rigid; a bunch back, malicious.

That long and lean toes signe rude, and unwise; short and thick toes, rash, and heady; toes that clinch together signe covetous and luxurious; toes that start asunder signe light, and loquacious.