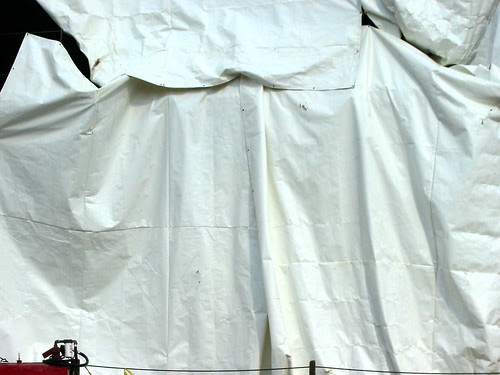 Reading The Grand Piano—the first part—in tiny doses, concentratedly. I’ll probably just toss out my notes, &c. in whatever form—rabid, nugatory, impercipient—avoiding any grander fanfare, or synthesis. I find it vaguely alarming that the collective decided to pursue the autobiography “thematically”—the first clump being about “love,” though what one reads is closer to a Shklovsky-kept Zoo, that is, “letters not about love.” (As if the “standard”—romantic love—were beneath contempt, with its centuries of banality.) My druthers’d be a less controlled book, or series—something slippery and idiosyncratic, less “pruned.” A pixilated free-for-all, rather than these tidily deliver’d livres. It’s not at all clear how the present books (I have the first two volumes) reached the “final state” they come to one in: Carla Harryman refers once to “the ‘violent leaps’ in my thinking, which have been pointed out to me in the course of our editing this material”—and I expect something far closer to the “true autobiography” of the present (determined, social, history-bidding) formation lies in the rubble of the raw correspondences that result’d in it. (If the work begins in the 1998 or 1999, why’s the opening volume seem so tentative?) (I am baffled, too, why the decision made to dribble the books forth, and so expensively? Surely one binding’s cheaper than ten.) That said, the books are handsome in wraps, and sized right.

Bob Perelman’s rueful admission: “Being a parent changed some of my stylistic priorities.” Er, no constructing / producing of meanings for that kid! There’s a rather odd sudden relationship with “permanence” in Perelman’s account. He says, “So, what is a vocabulary, what are the tunes to entail a permanent relation to existing conditions?” (So long, slippery signifier!) He asks, “how to say what stays put?” And: “love, in writing, does depend on some deep-set stance turned toward permanence.” Toward the end Perelman suggests that “invention” comes out of what he calls “desire-writing”—a place that smacks of impermanence, lightness, goofing around. Where’s “invention” now? Where’s the processual fevers of yesteryear? Surely any relation with today’s (the kid’s) “existing conditions” requires agility as one “priority.”

I have to admit it: about halfway through Barrett Watten’s piece I start’d being viscerally embarrass’d for him. Hollow disbelief registering in the gut as panic. The extraordinary fit of paranoia regarding, mostly, Barrett Watten’s own belatedness, and the competitiveness, the possessiveness, and one-upmanship he musters to dispel it is completely disconcerting to see. Watten, reflecting on meeting Perelman (“why does he act so competitive?”) at Iowa:

. . . this is the moment of contested belatedness. What writer has not felt it at some point in his or her life? I am always the last to arrive, but the first to record it. Or perhaps I was the first to arrive, and everyone has already published their memoirs. In any case, if I were to issue an injunction to stop writing autobiography, it would probably mean that one should stop deluding oneself in the terrible misrecognition of having arrived on the scene either first, or belatedly. There is always someone who has arrived before you, and always the arrivistes who want to act as if you were never there. Just as in liberal society, there are always those with huge social prestige and impossible real estate, and always the pretenders and aspirers to same.

Such dismal insecurity—and its attendant aggressiveness—riddles the thing. I want to say, faux-Britly: “Criminy, lad, cark it.” Thinking a little over-determined humor’ll knock it out of him. Later, complaining about Zukofsky’s “belatedly prefigured” trope of “love,” and how Z’s used it in a mustering of particulars—“guarantors of an immanent sameness of perduring experience, figured in advance”—to jump the modernist ship leaving the docks, Watten laments:

The rest, meaning myself and my friends—well, we would be forever outside the heavenly compact that would make literariness a matter of who got there first. Love, as the end of a poetic tradition at least in America, is authoritarian.

The theorizing of Watten’s own shirt-color, angelic blue for the Zukofsky “A”-24 performance, “ox-blood red” for picketing, that . . . whew.

Steve Benson is probably the writer here whose work I know least. What I like is the recognition of the absolute “sustenance” afforded by what he calls “the alienated province of art production.” Sustenance that is, finally, unsustainable, being located in a realm “discrete from that purported terra firma of an established actuality, wherein lay crouching responsibility.” Sense of “all that” being “there”—some distance off, pleasantly behind one who writes now “in the woods just off a bay on the coast of central Maine.” (If that province were not so alienated, outside the marketplace, the world of “tangible reward,” it would fail us gangly misfits. One turns to Blogland against the machinery that co-opts the monthlies, the weeklies, &c.)

Carla Harryman begins with a rather obligatory-sounding litany of military opposition before vaguely positing that all that’s got “something to do” with love and “discordant sentences”:

The theme of love in poetry recollects all the above in my mind and has something to do with my then investigation of discordant sentences that if at all romantic (were they?) stayed on the playful and jarring side of romance.

Next, she stages a Pierre Menard moment with a stanza of Robert Creeley’s “The Door” (“I will go to the garden. / I will be a romantic. / I will sell / myself in hell, / in heaven I will also be.”) in order to address the impossible gender relations and assumptions (“consider the masculine subjectivity of the poem as a fixture installed within my own mentality”) that inhere in the romantic tradition. Next, she relates a story of first meeting Creeley (1980) at a party, and how he “cornered me, more than once . . . and repeated the same question over and over again in an aggressive fashion. ‘Where are you from?’” Harryman, rather bizarrely it seems, explains away Creeley’s boorishness by suggesting that she’d violated the (male, in the tradition) authority of the poet, “he who makes”:

I came up with a theory, which given Creeley’s proclivity toward mean streaks in those years is to be taken with a grain of salt. It is this: upon introduction, I naturally identified with him as a person who makes. This was the violation that elicited the aggressivity of the question . . .

In spite of the minimal recognition that Creeley could be, well, an asshole, Harryman then proceeds to use the scene as basis for why the Language poets might’ve encounter’d opposition and antagonism in some quarters:

Doesn’t this have something to do with our critique of ‘the self?’ Of the authority and authorship of ‘the poet?’ Isn’t this why some of us experienced a great deal of antagonism and public attacks? That through ‘language writing’ the male authority of the poem was actively questioned?