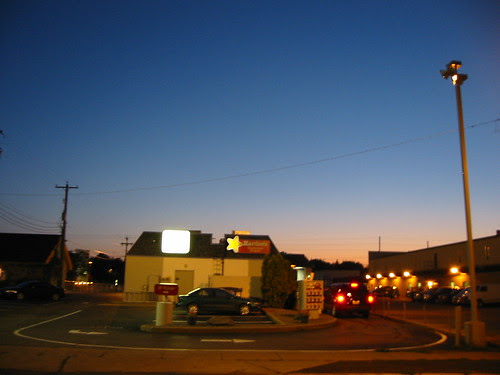 Because I start’d carrying a camera around (in Rome, nearly a year back, mostly for graffiti splashes and stencil pictures), now I look at photographs differently, consider things differently, contrasts, frames, depths of field, and serial intents. And because I only start’d a year or so back, I am completely took by Tom Phillips’s 20 Sites n Years (OBART) project. Here’s what he says: “Every year on or around the same day (24th May-2nd June) at the same time of day and from the same position a photograph is taken at each of the twenty locations . . .” Or, additionally, in the original notes (ca. 1973, printed in WORKS / TEXT):

The locations are situated on what is (in 1973) the nearest walkable route to a perfect circle a half a mile in radius from the point in the home of Artist 1 (102 Grove Park, London SE5) where the project was devised and where these instructions were written. The circuit is divided into sixteen equal sections in each of which there is a site selected by Artist 1. . . . The project book notes the times of the original photographs of 1973 and these should be adhered to as closely as possible (though all photos need not necessarily be taken on the same day). Artist 1 intends that the pictures should be taken by his family and their descendants, if they are willing, and that the work should thus go on indefinitely: the services of their friends may be enrolled or even from time to time that of professional photographers. Continuity is the most important factor.

There follow several paragraphs of more or less technical requirements, including “Accessories like lightmeter batteries should be stockpiled if they seem in danger of becoming unavailable.” And: “If it should become physically impossible to stand at the position noted the Artist must use his own discretion in deciding whether a relevant photograph can be taken (i.e. if it only involves a displacement by a few inches) or whether the site should be abandoned. If the latter, that location should be regularly reexamined to see whether resumption is possible.”

“Artist 1” because of the intent of succession: apparently Phillips’s son Leo, eight years old when the project began, works with Phillips now and—in Phillips’s words—“will carry on with it when I conk out.” OBART attach’d to the (rather utilitarian, straightforward) title because of an “enigmatic notice featured in the original photograph of site no. 15.”

The detail’d instructions remind me of some of Jackson Mac Low’s for various group voicing projects (“I cannot emphasize too strongly that performers must listen to, relate with, and respond to each other and to ambient sounds, including those of the audience.”) The ongoingness of it reminds me of Michael Apted’s heartbreaking series of documentary 7 Up films—49 Up (2005) is the most recent—following a (diminishing) number of individuals of widely disparate social classes, every seven years, as they age. (“Give me a child until he is seven, and I will show you the man.”) The setting of temporal parameters recalls The 3:15 Experiment (The Owl Press, 2001), with Bernadette Mayer, Lee Ann Brown, Jen Hofer and Danika Dinsmore, pointing pens to paper twice every twenty-four hours in a congruent effort to capture time’s own needs. I think of my own yearly migratory bird outings at Point Pelee, every May, slow ritual accumulations of data bespeaking a need for restraint, patience, differences mark’d in increments, scales that reach the human through generational constancy—all over and against a culture that demands constant hurry, over-production, too much, and now.

Because I am devil’d by the plucky idiot’s (or incorrigible narcissist’s) need to apply every artistic idea to my own work with words, I try to think of a way to write a series of twenty poems again and again, in precisely similar annual conditions. Factors to make regular and consistent: day of the year, time of day, place of writing, time expend’d writing, writing “instruments.” And I think: too few constraints. How about: outfit (“my regular fishnets and muffler’ll do”). How about: beginning with the same first line each year, and ending with the same last line, and a limit to total number of lines—all that to make a frame into which the “guts” of the poem get pour’d. Of course, truth is, I’ve exactly zero patience for any of it: I who would want to read all books simultaneously, who spare no tidbit of “thought”—no matter how minuscule—in my “notes.”

I like Phillip’s gentle humor, sign, too, of restraint, a kind of affection for the human animal:

Although the sites were chosen in rather a vague and hurried way within a mere skeleton of a system, there seems to have been some serendipity in their begetting. To take for example the urinal chosen as Site 13:—I seem to remember that the reason I chose it was as a memorial to a famous photograph of Degas coming out of a Paris pissoir: perhaps I thought my timing might coincide with a call of nature visited upon a Beckett or a Boycott. The days of urinals (I should have guessed) were already numbered, even in 1973, though I have not remarked a corresponding falling off in my need to use them.

And here, in a tight spot (or retrospecting it):

Two men at whom I had pointed my lens as they came out of the depot immediately crossed the road and threatened to smash the camera up (and me as well, as an afterthought). I hurriedly explained that this was just a project on local architecture. The milder of the two men cooled things down by telling the other that I was obviously not ‘one of them.’ I felt rather shaky but got on with my photos. I had a year in any case to ponder whether I was one of them or not.

Reminds me of seeing a veritable posse of prostitutes on the rue St. Denis in Paris emerge out a doorway and swarm across the street to harass a young American tourist into coughing up the film in’s camera after he’d snapped a picture of them.

The art and life limbo and collision: Phillips pictures a “frightening scenario” in which “the project became slowly more and more famous, until the sites themselves were developing into tourist attractions. In the appropriate season, as my great great grandson, let us call him Bill, is dutifully making his circuit, crowds swarm round him at each site as they do round famous golfers on the greens of Gleneagles.” And the corresponding fright: the crowds likely to congregate around the writer (remember the fishnets) due now for the daily “bout.”