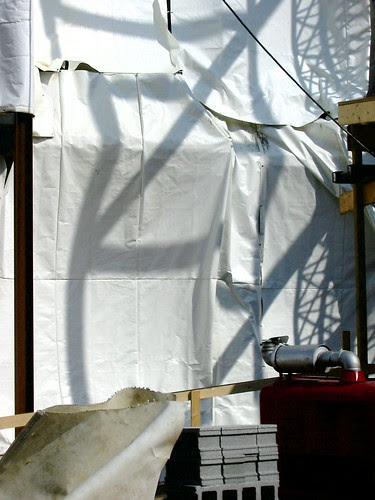 “Left it in my other pants.”

All the lame fretting ways of stopping down Time—closer to the bridge’ll make it soar off into angelic registers. (James Brown: “Can I take it to the bridge?”) Truth is, I rather like jamming, bouncing off the nothing debris, no “project,” no “focus,” no “theme.” I like to collapse down in a mock heap of saying, and haul myself back up, sweat-pearls flung off by exertion, knuckles shining off the microphone stand, cape slipping off, the boys doing the riffs poker-facedly, no sympathy tender’d to the hundredth performance of mock-agony, and reprise. “Ain’t no scratch off my Cadillac.”

The kind of thing that makes Lorine Niedecker a solace. (I just noted that Penberthy’s Collected Poems carries a dedication “for Kenneth Cox”—what’s needed is a collected Cox, slim’s it’d probably be, something bigger ’n the Agenda-publish’d Collected Studies in the Uses of English.) Niedecker, out of “Next Year or I Fly My Rounds Tempestuous”—the calendar with the usual calendar platitudes (Penberthy provides one: “True bravery is / shown by performing / without witness what / one might be capable / of doing before all the / world.”) pasted-over with Niedecker’s own handwritten “versions”—“I can always / go back to / fertilization, / kimonos, wrap- / arounds and / diatribes.”

Rich musterings of nearly tactile vocables set against some larger unsung dramatic tension—Niedecker’s impeccable ear is a large part of it—though I think more pertinent is a ferociously “right” diction, and a persistent sliding off of expectations. Not talking at the top of “lungs”—not the usual agon of argument—it its place “white,” a blotting out, a refusal. And pushing ever further against the expect’d, not “white / resignation”—that would be a tailing off, poem ending as pout. Niedecker’s “resignment” (besides strengthening the high skirling long i in “white”) reminds one of “assignment” (and “reassignment”; and, distantly, “assignation”), and markedly points to the root “sign,” mark. The “white / resignment” becomes the mark of Niedecker’s determination “to make a sign,” to slough off the torpors of loss, to make the “white” her own.

Not “merely” ironic, like most of Robert “JOE JOE” Grenier. Not ironic at all.

Funny to come up out of the seeing and think “How’d that come about?” Harryette Mullen’s got a little thing that goes, “Night moon star sun down gown. Night moan stir sin dawn gown.” (In Trimmings.) And I can’t keep Apollinaire the flâneur des deux rives away of that thing. Mostly because in trying to translate the pear-shaped Guillaume’s “soleil cou coupé” oncet I wrote “moon sawn bone”—putting the “Zone” into the night of the twenty-first century. If last century’s mark’d by the bloody cut off neck of the sun, the current one’s moved into a more dedicated (licensed) butchery—with saws—by, apparently, more dedicated (licensed, if the paucity of any public incendium be a measure) butchers. Mullen, of course, is talking about a more personal transformation.

“I promenade, mostly, I make myself do the big promenade.”