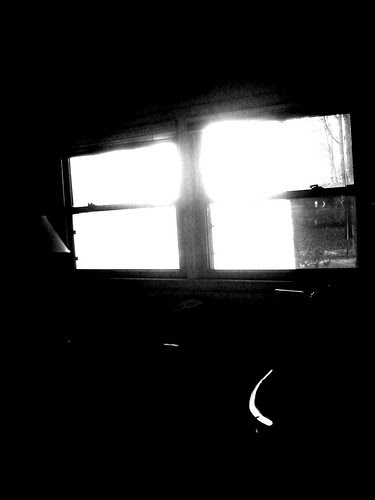 Light in a Room

After reading Peter O’Leary’s “Spiritual Autobiography” in the new Damn the Caesars—“this inspeciated light” still reckless and voyant to my tongue—I managed to put my hand to a copy of O’Leary’s Depth Theology (University of Georgia Press, 2006), and dug out the copy of the chapbook titled A Mystical Theology of the Limbic Fissure (Dos Madres, 2005) O’Leary’d mail’d me at a particularly fraught and knotty juncture (for me) that summer. Meaning, I barely look’d at it then, standing akimbo to the abyss (or so one likes to say—for the bug-eyed sass of it, though, in retrospect, a little fresh-pick’d fleabane’d’ve done the trick of ratiocinating myself to myself.) O’Leary points to the undone stays that brought him to a joyous regimen of meditation (again, in “Spiritual Autobiography”) and it sounds a similar wrong’d bell, near-hysteria mangled / subdued by hysterical spitty overchew (I love it):

At thirty-one, after airless sudden residence mercilessly prolonged
in the crypt of a morbid
anxiety—a bomb-shelter whose fluorescence was
a lightless dysthymia flickered
from serotonin-disrupted dendrons where
I lived & studied my feelings’ glassy
melancholia archivally—I read

Dysthymia: thymos being Greek mind, and dys- ascending out of Sanskrit dus- meaning bad, difficult, &c. O’Leary’s an inveterate neologist: in notes to Depth Theology he points to various “coinages from taxonomic roots: a apiologist (a word Emerson once used) is one who studies bees; a parulidologist is one who studies warblers.” (One need only flip open the Peterson’s to see: “Wood Warblers: Parulidæ” for verification, the “bright-colored mites” of the spring treetops.)

Randoming so is a way of avoiding. Circling (Emerson) about the fact—bluntly put—that what initially pushes me away in O’Leary is my utter congenital contempt for theistic pursuit, my dogged unprevaricating atheism, together with my gospel-truth idiocy when confront’d with the biblical, the mystical, the spiritual. As I admitted rather sheepishly to Mark Scroggins: “I’ve never read Milton.” (Though I recall “doing” a paper about Milton’s “rabid propensity eternal” to bracket nouns with two adjectives. Or did I say cushion nouns. The whole cloth of it cut out of a friend—who’d read Milton—’s tip, and we agreed not to share nomenclature.) I note here—retrieving my baggy thought about religious avoidance—that O’Leary’s got a poem call’d “Fear of the Innermost Body within the Body That We Call the Heart.” First line: “is fear of God.” Raised up, I was, to club back with the empirical, the rational, and the pragmatic any inner ravenings or other-worldly beckonings. Point finale.

The birds open the door. O’Leary’s (contagious, adamant) yearning for the inner “world,” inwardness, the “enmatter / enmater / enmother” as he calls it, riffing off Dante’s ’mparadisa, is clear. In “The Revival of the Religious Sciences” he writes:

We’ve spent millennia chasing the outward world, hapless
experts at exploring it. We need now to look inside. In exchange
for any lost progress, I will give you one hundred years of inwardness, a century
of the soul’s spiral movement, labor,
prayer, reading, inner energies coalescing from lower domains,
a private flaming ministry, a most Miltonic knowing.

The birds open the door. Meaning, finally it is the encounters with the outward physical world (“Nuzzling the duff” it says somewhere), particularly O’Leary’s knowledgeable and precise ornithological rhapsodies, that moves me into the work. See something like (in “Three Scepters”): “Our largest larus—the black-backed gull / —opens its wings like an umbrella designed by a bookbinder—: joints / of feathers on ribs of bone that feel the air as / curvature.” It’s writing out of attending, percipient, quiet, exact. Elsewhere (“Spiritual Giants”) there’s “the cedar waxwing, maneuvering in summer / leafage, feathers greased with vasoline.” And the “Black-crowned night heron, master of an / elusive attention, extracting / alewives from algae with evolutionary tongs.”

O’Leary’s (secular) tradition is Thoreau, is Louis Agassiz, is Guy Davenport and Ronald Johnson—clarity of mind coupled with a willingness to go afield for the decisively right word (“vasoline”). (See something so wonderful as Agassiz’s description of a turtle egg, wherein cells—“golden pebbles”—“dance about their confined sphere in a zigzag quiver” before a boundary wall “bursts suddenly on one side and extrudes at a single contractive effort nearly the whole horde of its vivacious motes, assuming itself by this loss a wrinkled, unsymmetrical, much diminished shape, but still holding a few oscillating corpuscles.”) Of the non-secular tradition, most amazing to me is one Isaac Luria (1534-72) of whom O’Leary writes in a note: “best known for his creative misreading of a Talmudic expression of the concentration of God that went into the creation of the cherubim. Luria inverted the meaning, turning concentration or compression into withdrawal, or tsimtsum in Hebrew. Hence, at the strictest moment of creation, as Luria read it, God withdrew from ‘godself,’ leaving a divine retreat.”

What carries through—door and threshold breach’d—is the language. If the physical world be so uncongestedly and fondly limned, the lingo and ease carries straight into the godly reports. “With More Passionate Flying” begins:

What would the Throne that held me clasp with, or utter?
Nothing. He’s bodiless, voiceless. Same with the salamandrine
Cherub, fire-breather whose cry is more fumarole than noise. Awe
at the unconsuming source, drawn there, adhered to in a quantum motion,
electron spun from a proton of light. Imagine
letters suddenly speaking caught up in a flame on the threshold of speech.

Is there a giddiness, a dizziness at acceptance of mystery, at exploring mystery’s savor? That, yes, and a nonchalance. O’Leary: “Hail, meaning; / converse with thyself. A god’s privacy is massive.” And a refusal to go hidebound high-horse: “What fool takes comfort in prayer? You / suffer it, learn it like a foreign / language. Its tedious lexicons.” A distillate ferocity, political, here:

On the New Sacrificial Platforms

Sun, a foil of seizures, rolls outside tallgrass seas. It is
a spasmic behemoth. Convection lags buzzards overhead.
You scornful testamentarians have flecked this mythical beast with
error & despondence. An air of bovine simpletude. A sacrifice
fit for the butcher & smoke-pit tender. Who venerates
an epileptic god anymore? The sun throbs
with bloodletting. Will you shove your wallet in its mouth to save it
from swallowing its tongue?

The temptation to quote and requite oneself by quoting—“Heavenly meteorite that pocks the private surface / blisters the mirror of your contemplation.” Awe and admiration distend me, insufflated by a book and half-comprehending.