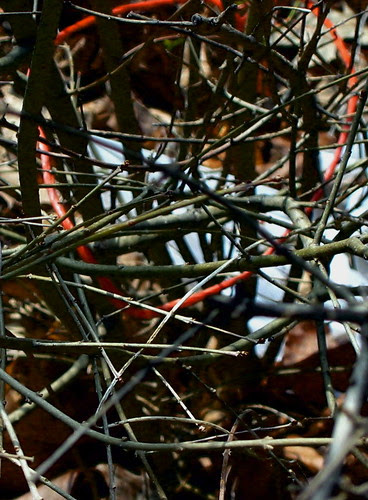 Gulping down great draughts of cetacean sludge scents, what rises up out of the inland seas abscond’d, the ancient horsetail mires, slightly fishy, mostly muck—that’s how it is riding in in the bountiful warm wet morning air. Enough to want to press one’s tongue to the earth, or skedaddle off into the hills. Around five, stirred out of sleep to a rattling downpour and figured the worst: stopped by six. Love the matted down grasses, paperish and leach’d of color. Love the green spears that pierce skyward.

Reading around and about Philip Larkin, mostly out of a wild-eyed suggestion that I come to England for a Larkin conference, a thing I desist’d out of the librarian clerk class of perennial poverty (and no travel perquisites) and—less vociferously—out of knowing nigh nothing about the librarian of Hull. I recall Robert Morgan at Cornell teaching some Larkin—somewhere a copy of High Windows or The Whitsun Weddings exists in my double-shelved atelier (librarians lack ateliers, they just go big-headed about whatever little shelf they’s allotted)—though I retain next to no specifics of it. So, being a biography hound—one way in—I’ve been reading about Larkin in Andrew Motion’s 1993 biography. (I add that reading “against the grain” of what’s expected—reading in other fields, reading “the other side” is something partisans of both (sides) probably ought to do more of, sometimes I think of poets ’s being narrower than, oh, Harlequin housewife romancers when it comes to reading. It never hurts to beat one’s own inane and insipid—though we like to think of them as “hard won”—preconceptions with a stick every oncet or so, no?)

Somewhere I landed a water-rippled copy (50¢ in the inside cover) of Larkin’s Required Writing. Reading a “Statement” written for D. J. Enright’s Poets of the 1950s (a note is append’d wherein Larkin complains: “I assumed he would use . . . replies as raw material for an introduction; I was rather dashed to find them printed verbatim), dashed if I’m not struck by its similarity to Frank O’Hara’s 1959 “Statement for The New American Poetry.” Here’s Larkin:

I find it hard to give any abstract views on poetry and its present condition as I find theorizing of the subject no help to me as a writer. In fact it would be true to say that I make a point of not knowing what poetry is or how to read a page or about the function of myth. It is fatal to decide, intellectually, what good poetry is because you are then honour bound to try to write it, instead of the poems that only you can write.

I write poems to preserve things I have seen / thought / felt (if I may so indicate a composite and complex experience) both for myself and for others, though I feel that my prime responsibility is to the experience itself, which I am trying to keep from oblivion for its own sake. Why I should do this I have no idea, but I think the impulse to preserve lies at the bottom of all art. Generally my poems are related, therefore, to my own personal life, but by no means always, since I can imagine horses I have never seen or the emotions of a bride without ever having been a woman or married.

As a guiding principle I believe that every poem must be its own sole freshly created universe, and therefore no belief in ‘tradition’ or a common myth-kitty or casual allusions in poems to other poems or poets, which last I find unpleasantly like the talk of literary understrappers letting you see they know the right people. A poet’s only guide is his own judgement; if that is defective his poetry will be defective, but he had still better judge for himself than listen to anyone else. Of the contemporary scene I can say only that they are not enough poems written according to my ideas, but then if there were I should have less incentive to write myself.

I am mainly preoccupied with the world as I experience it, and at times when I would rather be dead the thought that I could never write another poem has so far stopped me. I think this is an ignoble attitude. I would rather die for love, but I haven’t.

I don’t think of fame or posterity (as Keats so grandly and genuinely did), nor do I care about clarifying experiences for anyone or bettering (other than accidentally) anyone’s state or social relation, nor am I for any particular technical development in the American language simply because I find it necessary. What is happening to me, allowing for lies and exaggerations which I try to avoid, goes into my poems. I don’t think my experiences are clarified or made beautiful for myself or anyone else; they are just there in whatever form I can find them. What is clear to me in my work is probably obscure to others, and vice versa. My formal “stance” is found at the crossroads where what I know and can’t get meets what is left of that I know and can bear without hatred. I dislike a great deal of contemporary poetry—all of the past you read is usually quite great—but it is a useful thorn to have in one’s side.

It may be that poetry makes life’s nebulous events tangible to me and restores their detail; or conversely that poetry brings forth the intangible quality of incidents which are all too concrete and circumstantial. Or each on specific occasions, or both all the time.

Is it largely the slipperiness of tone—both deploy an abrupt tongue to cheek stopping-down (near musically) with alarming rapidity—that makes the two statements vibrate. In a little roster, one’d put under “agreements”:

—the “experience itself” is what counts, “in whatever form”;

—other contemporary poetry is mostly of little use or interest—except as “thorn” or “incentive”;

—the impulse to write is mysterious and vague beyond some “impulse to preserve,” some restoring of “detail” to “life’s nebulous events”;

—a poem makes itself by something like blind grimace and gumption (“I make a point of not knowing what poetry is”)—is its “own sole freshly created universe,” “is found at the crossroads” between splendid overreaching and innocuous contempt.

Too, there’s apparently common rejection of something like a line of progress stretching forward (and back) with O’Hara’s denial of being “for any particular technical development in the American language,” and Larkin’s lack of “belief in ‘tradition’ or a common myth-kitty.”

The disagreements column’d collect most obviously a different attitude toward the past—O’Hara’s “all of the past you read is usually quite great” versus Larkin’s rather anti-modernist snap about the “casual allusions” of “literary understrappers.” Though that points more to a kind of spoil’d child petulance on Larkin’s part, whereas O’Hara’s mock-sneery contempt regarding literature’s rôle vis-à-vis anyone’s “state or social relation” strikes one as something more attractive, say, sassy irreverence, lyric defiance. (And defiantly lyric: two post-Poundians.) 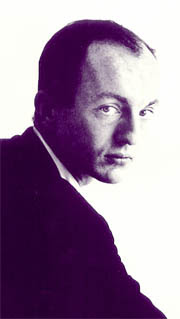