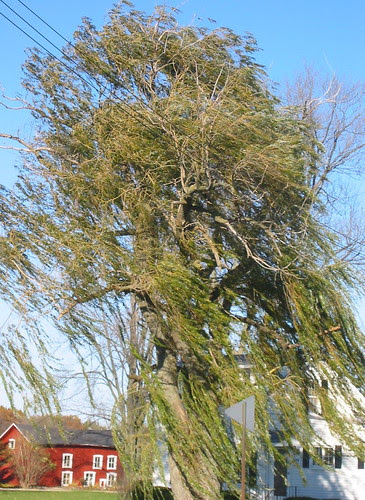 Here’s an idiotic subvert to the exult’d realms (read “reams”) of poetry: maybe the notes (guides) and the originals (sources) ’d prove worthier of the monicker than the thing (Ding) itself. That’s what I think reading around in George Butterick’s Guide to The Maximus Poems of Charles Olson. (Endless—though sporadic—is my attempt to “enter” Olson’s work.) That is to say: my druthers is to read the Butterick and skip the Olson. Is that the fault and danger of a poetry of facticity? Here’s the Olson piece corresponding to a random Butterick—that is the Butterick (kicking around near the desk, I dug it out for “one knows not what calling”) sent me to rustle up the Olson:

while on
Obadiah Bruen’s Island, the Algonquins
steeped fly agaric in whortleberry juice,
to drink to see

Vivid enough, the “whortleberry” being mysterious, somewhere between the chokecherry (harmless, pucker-mouthing, that “dull” teeth feeling if I remember, like what spinach does) and the serviceberry (which I don’t know well, it being a southern Appalachian tree, showy, white—is it the serviceberry that coincides with the striped bass run in the Hudson, or is it the shad run in the James, in Virginia; the problem of the mobile American life is forgetting the local lore, if indeed one ever learns it.)—point being the revery fills up the four lines, the “drink to see” is easy: vibrant air, a clarity that vibrates, or that story I read in a barbershop National Geographic about Amazonians of one tribe or another ingesting something that made only the monkeys (a source of nourriture, a monkey-eating tribe) color “up” startlingly sharp in the black and white of the jungle (or something, I exagggerate betimes, thank you, Steve Katz). Obadiah Bruen puts us in the Puritan-scar’d hands of New England, basically. The fly agaric—whether I recall’d its being another name for the Amanita muscariaor not—certainly it is the screw in the ointment (to coin a phrase) around which all the steeping (“ours” and Butterick’s) occurs. Here’s what Butterick says:

On the back of an envelope from drug researcher Timothy Leary postmarked 23 December 1960, Olson had written: “steep dried specimens of fly amanita in whortleberry juice / haschish & majoon”; while in an unfinished essay from ca. 1962 among the poet’s papers, entitled “Under the Mushroom,” there occurs: “amanita muscaria / fly agaric to Algonquin Indians who probably used same but without any such organization as the southern Indians who called one bite or enough mushrooms to get to the autonomic nervous system ‘God’s Flesh’ . . .”

Fly agaric or the mushroom Amanita muscaria, mixed with whortleberry juice, was sufficiently well known among primitive peoples for its hallucinogenic properties. It was used by the old Norse (from whence came the fury of the Berserks) and by the Siberians (first reported by Strahlenberg in 1730; English translation, An histori-geographical description of the north and eastern part of Europe and Asia, published in London in 1736. The Siberians, for example, according to Marshall, The Mushroom Book, p. 49—apparently the source of Olson’s note from ca. 1960 quoted above—“steep dried specimens of the fly amanita in whortleberry juice, and thus make a drink which produces an intoxication similar to that produced by the ‘haschish’ and ‘majoon’ of the East.” See also Wasson and Wasson, Mushrooms, Russia, and History, I, 190-214.

There seems to be no distinct evidence, however, to suggest that the Algonquins shared this practice. In conversation, August 1969, the poet explained that he was led to write the poem by the association of the method of diluting the mushroom’s potency with whortleberry juice with the name of Whortleberry Hill, a prominence on the east side of the Annisquam River a little below Pearce’s Island (formerly Obadiah Bruen’s Island) where shell heaps left by the Algonquins have been found.

Moreover, it does not seem that the poet knew from experience whether the whortleberry juice did make a proper mixture. He writes in a postcard to Albert Glover, 20 August 1969, who had sought his advice: “I can’t, for the life of my self tell you if whortleberry juice does cut Amanita. [I was told in Maine . . . that all one has to do is ‘skin’ fly agaric to take off its poison. But above all see the Wassons Russia, History & the Mushroom (for recipes).”

I like Olson’s bungled Wasson title. Why is all that so much more edifying than Olson’s four lines? (Is poetry meant to edify?) Is such poetry a mere interloper, a middleman retailing not itself but some promise of bigger delights like the flea-bit hireling barker outside the door to the peep shows, the GIRLS! LIVE! joints? And only to send one “off” into the source-books whence that poetry out’d? Poetry as condensary, as engine, as imploring mutter (or snarl)? I don’t know.

The other thought: where’s all the “shop talk” about the menace and delights of the “to drink to see” applications (to fall into the lingo of our pixilated age) amongst our current writers. The suspicion that—oh dear—such bedevilment could make one falter in the traipse? rush? bull-headed battering? along the career path—tiptoes across my brainpan. Yuh.

Final note: wholly wrong about the whortleberry’s resemblance to the serviceberry. Not a tree, a shrub, a bush. What I’d likely call, mistakenly, a blueberry or huckleberry: “closely related to North American wild and cultivated blueberries and huckleberries in the genus Vaccinium. The easiest way to distinguish the bilberry is that it produces single or pairs of berries on the bush instead of clusters like the blueberry.” Myrtilles in France. “They were called black-hearts in 19th century southern England, according to Thomas Hardy’s 1878 novel, The Return of the Native.” The longing for the factual, the “of use,” the tangible worm pull’d out the frangible earth, the names of things . . . against a poetry of social negligibles and the ruts of form.

Charles Olson, Talking to a Professor