The Way It Wasn’t 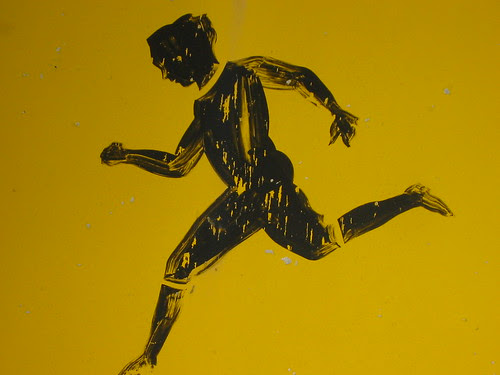 Hoist’d up James Laughlin’s “auto-bug-offery” titled The Way It Wasn’t: From the Files of James Laughlin. Edited by Barbara Epler and Daniel Javitch (New Directions, 2006). Epler is editor-in-chief of New Directions and Javitch is Laughlin’s son-in-law and professor of Comparative Literature at New York University. The book is probably less “autobiography” than “scrapbook,” an abecedarian of photographs, paintings, memos, notes, poems, book jackets, bits of letters, and drawings, hefty, sumptuous, right. The Way It Wasn’t follows the 2005 publication (list’d as New Directions paperbook 1000) of Laughlin’s Byways: A Memoir. In verse—like the earlier recollect, Remembering William Carlos Williams (1995)—Byways begins: “Often now as an old man / Who sleeps only four hours a night, / I wake before dawn, dress and go down / To my study to start typing: / Poems, letters, more pages / In the book of recollections. / Anything to get words flowing, / To get them out of my head / Where they’re pressing so hard / For release it’s like a kind / Of pain.” The Way It Wasn’t reiterates that splendid restlessness in a poem that acts as preface, “The Junk Collector”:

What bothers me most about
the idea of having to die

(sooner or later) is that
the collection of junk I

have made in my head will
presumably be dispersed

not that there isn’t more
and better junk in other

heads & always will be but
I have become so fond of

my own head’s collection.

Rather Ammonsesque in its blunt simplicity, though one’d allow that that kind of thing starts with Williams.

Struck, oddly, by the first “A” entry—“What I’m writing now is my / auto-bug-offery. Wild stuff. / Mostly fictional. What I wished / had happened.” (Thus the title.) Struck how it echoes Roland Barthes’s notice up front in Roland Barthes: “Tout ceci doit être considéré comme dit par un personnage de roman.” “It must all be considered as if spoken by a character in a novel.” It’s possible the disclaimer’s part and parcel of the “construct’dness” of the era—I read the two books though with the same pell-mell sense of one abduct’d by a schema. (Possibly the propulsive A B C’s do it).

Laughlin lands most of the big fish of twentieth-century literary culture (he laments, though, how he miss’d Beckett—“Murphy. I didn’t think it was so wonderful at the time. I wish I had.”) Laughlin’s sharp wit is everywhere, along with charm and joie de vivre. One note regarding a shortish biography of Voltaire New Directions publish’d is telling: “It is far from a full biography—only 150 pages—but as the subject himself pointed out, ‘the surest way of being a bore is to tell everything.’” Some sample Laughlin tidbits.

Miss Barnes (Djuna, that was) came into the ND office to tell me that the next printing of NIGHTWOOD was to be done on paper that would last for 1000 years. I called the dealers who imported Arches and FABRIANO and sech, but the best they could promise was 700 years. She was very put off with me, declared me an idiot and threatened me with her cane.

That great bard R. Duncan was here for the weekend and talked for 8 hours straight. . . . Duncan reported this nice Ez story. My name came up at St Liz and Ez declared: “Jaz has a very long spine and he is always breaking it skiing. So when I kick his butt about what he should publish, the message does not ascend to his brain.”

To one friend who wanted to talk about literature / he said “I adore italics, don’t you? Don’t you?”

Does Widener have a copy of that Italian picture book of the del Cosa frescoes in the Schifanoia palace at Ferrara? . . . Ezra was much influenced for the structure of the Cantos by the “zones” in the frescoes: the virtues, the seasons, and the scenes of contemporary life.

Eliot is you-knee-cue, but how to put him across in this desert of insensitivity to literary imagination? I can’t remember any important reviews of Works on Paper. In France he would already be famous.

I am curious about Wittgenstein. Any philosopher who could say “You can’t catch cold over the telephone” certainly discovered Truth. But he didn’t know everything. On our farm we have a fifty-year-old tractor to plough snow that is neurotic. Sometimes one tread runs forward and one goes backwards. If you call the mechanic it’s $75. Then it does it again. I consulted our local librarian. She produced a book by Mr. Wittgenstein about Tractors. But the answer was not there. . . .

Under the letter “H” one Hiram Handspring, Laughlin’s comic double shows up:

After a study of current literary productions, H. decided that the quickest way to get ahead was to steal from successful old poets. It’s poet eat poet declared Handspring.

(Elsewhere, too, Laughlin’s a little catty-correct about the general odiousness of poets.) And, too, under “H”, a lovely poem call’d “Haecceity”:

Today’s new word was
Haecceity (2 “c”s in the
Middle), hardly a melopoeic
Word. It’s quite hard to
Pronounce. But it has much
Substance because it means
Thisness (and by later usage
Here and now). It comes from
The Latin pronoun haec,
Which means this. Just remember
Hic, haec, hoc from school.
What’s more substantial than
A this; it’s closer to us
Than a that. If you have a
This you have something you
can grab hold of, that won’t
Slip away from you, that may
Persist as long as you’re
Around in the here and now.

Francesco del Cossa, Detail of the Allegory of May: Triumph of Apollo, 1476-84
(Palazzo Schifanoia, Ferrara)