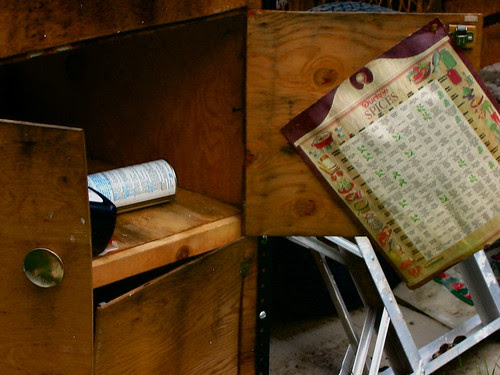 Back to Toledo for the concert itself: Nadja Salerno-Sonnenberg off across thirty or so occupy’d chairs, even with the scarlet’d up lips, less absorbing ’n she’d been in rehearsal. Though she may’ve jack’d the Tchaikovsky up a speed-notch, if that’s conceivable. Beforehand: Benjamin Britten’s “Variations and Fugue on a Theme of Henry Purcell” put me to thinking of all that ’fifties water’d down “modern” stuff with its percussive doodads punctuating woodwind noodlings of half-melodies. I’m thinking of sans-serif Helvetica type for everything, all the profile / full-face Picasso knock-offs, the Hans Arp blobs, the Giacometti-esque “wire sculptures,” the nausea story-squibs. (Funny, if I stare down into the estuarial murk out of what all that emerges, what I see is my copy of the University of Michigan student magazine Generation, issue dated 1951 or 1952, with a couple Frank O’Hara poems included. To see the full thrust of the “period style”—if by that one means the crass and cranially-adulterated remnants of twenty- to thirty-year-old “nouveautés”—one examines the student quarterlies. Even O’Hara’s work here: one’s a “Homage to Rrose Sélavy.” Another decade or so and the same style ’ll trickle-down into the high school literary “product.”)

The sensible Thomas Merton of Monk’s Pond and the Abbey of Gethsemani writing to James Laughlin: “[Robert] Lax sent me Waiting for Godot, which is very funny and I don’t see why people are running up and down asking themselves what is its message. But of course they always do, so in this case also they must.” Merton’d go in to use the public library in Louisville, reading Pound’s letters, looking for Zukofsky stuff.

How to dissect the Wyndham Lewis definition of art in the Julian Symons book. Symons is extrapolating, always a spruce-up job. Lewis’s character Tarr, in the novel Tarr claims: “Deadness is the first condition of art . . . The second is absence of soul, in the sentimental human sense. The lines and masses of the statue are its soul . . . It has no inside. This is another condition of art: to have no inside, nothing you cannot see.” Is it here that classicism and constructivism meet? (Why the Dylan “Brownsville Girl” line here pussyfoots in here I’ll never know: “The only thing we knew for sure about Henry Porter is that his name wasn’t Henry Porter.” Something about how the expressivist miasma of romanticism attracts precisely by such mysterious affability, no? What T. E. Hulme, in a snit, dismiss’d, suggesting the art and artists alike fly off into “the circumambient gas”?) I like the lack of inside: the Klein bottle, the Möbius strip, art as all uninterruptible surface. Druthers: that it be lively, if only acrawl with maggots, a feigning of life’s inconsistencies and eschewals. Braap.