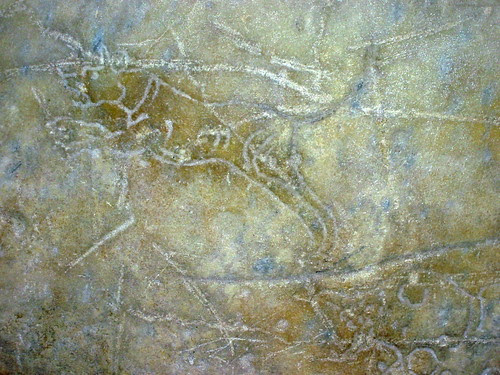 Off down into the Maumee-water’d reaches of Ohio, into Toledo, to attend a rehearsal by violinist Nadja Salerno-Sonnenberg with the Toledo Symphony, conduct’d by Guillermo Figueroa. Performing Tchaikovsky’s ripsnorter of a violin concerto. One senses with Nadja that the question of theatrics is moot, so wholly, transfiguringly immersed she is, whilst playing. Visage (la figura), mostly, though “the whole body participates in the act,” become a panoply of nuance, register, unkempt iterancy. Play’d by the music itself. It’s alarming, spell-binding, soul-squirming. As if one were laid out for inspect in the throes of writing, language singeing its way through.

To mundanity. Hawthorne’s American notebooks: “And now how narrow, scanty, and meagre, is this record of observation, compared with the immensity that was to be observed, within the bounds which I prescribed to myself. How shallow and scanty a stream of thought, too,—of distinct and expressed thought—compared with the broad tide of dim emotions, ideas, associations, which were flowing through the haunted regions of imagination, intellect, and sentiment, sometimes excited by what was around me, sometimes with no perceptible connection with them. When we see how little we can express, it is a wonder that any man ever takes up a pen a second time.”

Managed, after shooting back through the flatlands of southeastern Michigan in fog, to viddy a few pages of Makers of the New. Struck by T. S. Eliot’s claim of “finding the American literary scene between the beginning of the century and 1914 a complete blank” (Julian Symons). “Eliot said later that he could not recall the name of a single American poet writing in the period that he had read, and that there was no poet in England or America who would have been of use to a beginner in 1908.” (Eliot’s answer being the turn to the Symbolists, hence the import of Arthur Symons’s book—Laforgue, Rimbaud, Verlaine, Gérard de Nerval, Mallarmé.)

Causing me to consider (idly): what’s “of use to a beginner” one hundred years later, in 2008? My mule-bone reactionary kicks in to say: whatever’s essential of the moment is likely hid beneath the temporary counterfeit. Use, though, ’s a different bait-box. No obvious answer’s coming bashingly forth probably means one of two things: my inept masking of myself as “beginner”—in the late ’sixties I would’ve piped up unabashedly with “Frank O’Hara, sir!” Or, two: like Eliot, we beginners find ourselves in a similar morass, swamp’d by mediocrity, repetition, foolish gloms of the moment. After all, Eliot had an ample Palgrave, the Golden Treasury, first publish’d in 1861. (Just as we got our ample Allen, The New American Poetry first print’d in 1960.)

Sense of a need to jiggle the paradigm. Which, by gosh and Montgomery, nearly always points to a needlesome impetigo of the spirit, no? (No answer forthcoming . . .)