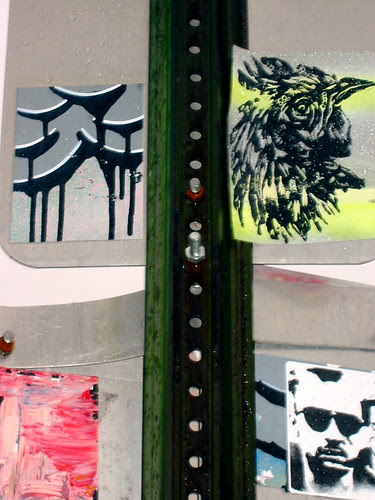 Conversation between Out to Lunch (Ben Watson) and Frank Zappa (Frank Zappa: The Negative Dialectics of Poodle Play):

OTL: Does everyone have interesting dreams?

FZ: I don’t know. I suppose to themselves they do. If you’ve ever had somebody tell you one of their dreams, it’s usually presented in a way that now you’re being given the opportunity to hear the most spectacular far-out fucking thing that anybody ever dreamed up—they’re all very proud of their dreams even if what you’re hearing is miserable.

OTL: Did you ever hear the expression ‘Jeder Mann sein eigener Fussball’?

OTL: It means, Everyone their own football.

OTL: It was the name of a dada magazine that became a universal catch-phrase during the working-class revolts in Berlin at the end of the First World War.

And elsewhere Zappa saying: “I don’t join shit.” I recall friends in Ann Arbor around the hot cusp of the ’sixties-’seventies motoring up to Grand Rapids for a Zappa concert. The “air” they took made it clear to me how precisely I did not belong: my distrust / contempt of mere men made godlike. Or “son of mere men made godlike.” Some few years later I hung with a couple of Louisiana boys who stuff’d all available thin dimes into the King Sub (Ithaca, New York) pinball machine. High score of the week land’d a monster sub. Proprietress: Suzy Creamcheese.

Conversation between John Yau and Jasper Johns (The Brooklyn Rail):

Yau: On a number of occasions you have used the words “helpless” and “deliberate” to talk about art making. For example, you once said “the final suggestion, the final statement, has to be not a deliberate statement, but a helpless statement. It has to be what you can’t avoid saying, not what you set out to say.” Years earlier, in another statement, you said: “It was not a matter of joining a group effort, but of isolating myself from any group. I wanted to know what was helpless in my behavior—how I could behave out of necessity.” What do you consider to be examples of helpless behavior?

Johns: Those quotations suggest to me that I felt or wanted my work to have a sense of the inevitable, the unavoidable. There was an attempt to uncover or succumb to a primary motive in the process of painting. This may not be very clear—there are so many available choices or possibilities. I suppose there was an attempt to establish some sort of spiritual discipline.

(And elsewhere Zappa saying: “I don’t join shit.”) (And elsewhere, Drew Gardner noting (in reading Daniel Bouchard’s Zasterle’d Filaments) the “fiercely mundane details that are not focus-group tested”—that’s the spirit!) One didn’t commence writing out of some weak-kneed need for a greater groupuscule glomming on to one another—or, if one did, one ought to join a mummery, or a rugby scrum—so why make that a way of keeping one’s snout up and visible?

Why I should find myself in the shallow bin of sleep thinking with high industry about the Peter Gizzi piece Jordan Davis provided yesterday (out of the London Review of Books), qui sais? Here it is:

The 6 a.m. January
encaustic clouds
are built
in a waxy gray putty
whizzing by with spots
of luminous silvery
crack-o’-the-world light
coming through, an eerie
end-o’-the-world feeling
yet reassuring
like an old movie.
Do I really have to go out there?
Now a hint of muted
salmon tones breaking
a warmish band
of welcoming pinkish light.
Is it like this every morning?
My head still in the dark.
Worry, eck! But the brightening
russet-tipped cloud ballet
reminds me of something
in Pliny, yea, Pliny.
Can’t imagine opening
the door today in a toga.
Work and more,
yes, work
sends us into the draft.

Like that word encaustic though I ain’t sure how a sense of “burning in” fire fix’d paint “goes with” the general adjectival clot that is January a.m. Which gets me to the heart of my complaint, surely. Isn’t one about to choke here? Modifier city, man! (The “crack o’ the world” phrase goes all Tom Waits in my recall—isn’t there a point he all salacious gruff-horny says “the crack of dawn better be careful around me”?) I get jiggy about that word eerie. Fine example of show’s jump over tell. Somehow in my semi-sleep rabidry about the poem, the collusion of “crack o’ the world” and “end o’ the world” had me viddying the Gustave Courbet masterpiece pudenda “The Origin of the World” in the catalog of my head. Which considerably buck’d up my “reception” of the poem. I’d maintain, though, and stubbornly, that it’s a silly exercise in falsely innocent humility (“Do I really have to go out there?”) for a man in Peter Gizzi’s “jam” to write about having to get up early to go to work. (Reading’s first query: “is it believable?”)