A Hymn to Voice 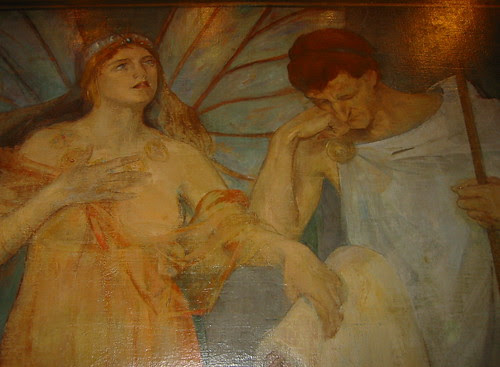 Wyndham Lewis, in Tarr, an hymnodic catalogue of whence the need to clump up, make “the groupuscule” and other mass apparati one’s (everyone’s, to hear the beavers say it) modus operandi: “[Insert name of prefer’d Imposter here] was a crowd.—You could not say he was an individual.—He was a set. He sat there, a cultivated audience.—He had the aplomb and absence of self-consciousness of numbers, of the herd—of those who know they are not alone.
. . .
For distinguishing feature [Re-insert name of prefer’d Imposter] possessed a distinguished absence of personality.”

Apropos, Theo Scratcher writes: “They slag off the voice, the “individual voice,” in soldierly squads they do some fine slagging off with a stomp-city herd mentality, making a ruckus of tiny hoof-dents, and bedding down in the long grass where all the others’ve bedded down, leaving droppings everywhere.”

How comprehend the way the reticular sac I find myself in bulges to contain all I drag in after myself? Tarr in the original 1918 printing—The Egoist, Ltd.—disrupts the Julian Symons narrative trot of the circa WWI mod crowd, and is, in turn, disrupt’d by the large recent biography of Willem de Kooning. A stowaway to the U.S. de Kooning. First stop: Newport News, Virginia, enough to make the Hollandais seethe with regret, all that flat sea-besmudged tidewater country in the offing, just like home. What I love is how De Kooning’s heroicism’s kept defiantly to the human-scale: he himself claiming that he want’d no canvas stretch’d larger than the reach of a man’s outstretch’d arms. (See Poe, Edgar Allan: a story read at a sitting.) Thinking about the issue of proportion and imagination: something like the Harvard “five-foot shelf” of classical knowledge versus the Google’d reaches. Too many apples on a tree ’ll result in a large yield of tawdry negligibles, a poor seeding crop. What a man can carry in the fish-pond of ’s head, and fish up out of there for a right occasion, maybe that’s an appropriate human poetickal scale. A balance untilt’d by effable daily lazy finger-reach: why d’you think it’s call’d a brainpan anyways? Putting myself in the agora of the meticulous nineteenth c. “The stumpy and practical walk of honest homeliness which mostly prevailed there . . .” (Thomas Hardy, who is nigh on to disrupting the de Kooning.)

Such is the weather a dumpy weekend accumulates, shoveling a few inches in freezing rain, lolloping downtown to disport in the usual “stores”—the used music emporium, the Friends of the Library rummage. Wiping the kitchen counter today, thinking how rarely such quotidian chores enter the faulty swinging doors of poetry, how they’d likely bang one on the ass on the way in (and out) if they did. The small pleasures of puttering, aimless, repeatable. Think of all the late de Kooning paintings, the nameless ones, “Untitled VII” (1985) or “Untitled XXIII” (1982), and how breathtakingly pure the paint looks—routine pared to its essential gestures, unequivocal, quick, most of a decade of wiping down counters. A distillate as opposed to a daub. In poetry, is a spare knowing unsparingness possible? Not the usual late work nigh-mawkish direct statement, “sentimental poop forgivable” (as John Milton might’ve put it), not that. Still the floods of particulars, particulars canny, domestic, bigger? (I see a note here about de Kooning working up—reusing—“rejected and unfinished canvases”—sanded down—in the ’eighties: “The ‘ghosts’ that remained on the smooth surface provided impulses for a new image.” The old moves, one’s own. In poetry, such ‘ghosts’ exist as one’s own porcine and snitty diction (or shitty diction); in one’s undeniable syntactic pivot, genial or not; in the way one makes the pact with the lingo, acrimoniously or gullibly or haphazardly or . . . All that is part of “voice” and isn’t something “downloadable,” isn’t something “social,” isn’t something to fizz up on a whim of a bored Sunday afternoon. It requires practice. One doesn’t “find” it—one constructs it, is construct’d by it, through repetition and reading, human-scale exchange and adventuring, and not through “out-sourcing” or pulling goop off a multinational.

Iris Barry, on Ezra Pound (who knew he was Pound because his little dog never knew what he was talking about): “His is almost a wholly original accent, the base of American mingled with a dozen assorted ‘English society’ and Cockney accents inserted in mockery, French, Spanish and Greek exclamations, strange cries and catcalls, the whole very oddly inflected, with dramatic pauses and diminuendos . . . I knew as little as a dog he might have been taking for a walk of even the sort of thing he was talking about; and, in addition, was too agitated to grasp much.”