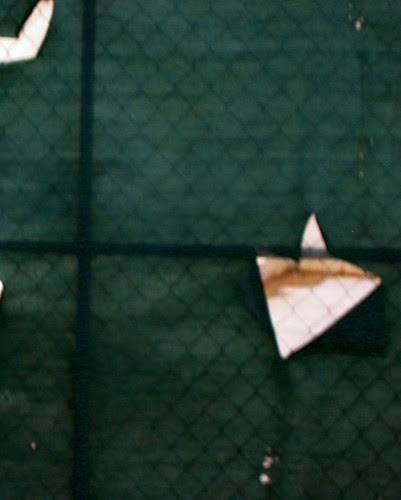 What Guy Davenport call’d the stories he publish’d: “my ravings.” Repeatedly. That humble self-deprecatory. And insist’d he ’s no poet. Irregardless the evidence of the fine Flowers & Leaves. Sous-titre’d “Poema vel Sonata: Carmina Autumni Primaeque Veris Transformationum.” In a letter to Laughlin (1992), another way (as if we need’d one) to parcel out American poets: “What I admire in your work is the hard-edged, sharp-focus clarity: the classic virtues. A Greek coin; whereas Ashbery is a dust ball from under the bed of a sluttish housekeeper. No, to speak a better truth, what I admire is the sense. My mother used to say that somebody had “said a mouthful,” meaning the right thing in the right words. . . .” An aim nearly gone in some quarters of the poetickal republic, no? And, similarly, though wrongly (the details too fine, the mesh of reference hid plainly in the interstices too Pavel Tchelitchew), regarding ’s own “ravings”: “I’m essentially a comic-strip artist—everything obvious and boldly colored, with ZAP! And GRR-R! for dramatic pouf.”

How often Laughlin harks back to nigh-forgotten Dudley Fitts, the classicist who sent him off to Pound. (“Fitts never talked about Thoreau. So I never read him.”) Laughlin, older by a dozen years or so, student to Davenport’s own autodidact’d classicism. Davenport’s lovely lessons (here, filling in for Laughlin a little about “The Lavender Fields of Apta Julia,” a story included in the New Directions-published A Table of Green Fields):

Apta Julia is the Roman name for the modern Apt. The story grew out of a photograph by Bernard Faucon, who was born there. I like his peculiar work, and realized one day that his photo of a startling blue lavender field (the local industry since Roman times) shot across the family wash on the line was a pun: our word “laundry” and the French lavanderie derive from lavender. (Romans washed their togae in piss, and then sweetened them up after sun-drying with lavender.)

Davenport regarding a writing class at Duke (fellow students: William Styron and Mac Hyman (No Time for Sergeants)) and the identifiable need to fub the self-conscious (“I just goofin’ around”): “The result was that I was paralyzed for years, until I saw that if I wanted to write I would have to do it the way I wanted to, without thinking of myself as “a writer” (I still don’t).” And: “I do not write off the top of my head while foaming at the mouth, but with some care and deliberation. I don’t think I have an ego. That is, I have nothing to say for myself, or as from myself. It annoys the hell out of me when reviewers say I like or dislike whatever: they’re always looking at what a character likes or dislikes. In a confessional age I keep my mouth shut (in fiction; not as a critic, natch) . . . .” Both Davenport and Laughlin noting they are slow readers, “every word” readers. (Here, insert fugue-state note about the delicious reveries of slow reading, ablative reading, say—reading that extends and encompasses “the source whence an action proceeds, the cause or ideal source of an event, the instrument and agent or material sources of an action, the manner in which, and sometimes the place and time at which anything is done.” Long lazy blastema’d reading.)

One astonishment. The depth and severity of Davenport’s anger toward the Germans. He asks that Laughlin write into the contract for A Table of Green Fields a refusal of German rights. And, later, thanks him:

Thanks for humoring me in the matter of forbidding German translation. People who stuffed 182 Polish orphans into the gas chambers at Treblinka (age 4 to 15)—Janusc Korczak’s orphanage—could not possibly understand any of my stories. Rabbi Yeshua was an admirable fellow, and died a hideous death, but he did not die with 182 innocent children. At the loading into the cattle cars, the shit-brained SS explained to Korczak that as an officer and doctor he did not have to accompany the children. “I will go with my children,” he said simply.

“Even as he is addicted to the pleasure of manipulating trash into grotesque hieroglyphics, the postures available in an exchange economy disgust the poet.”