Out of a newish book edited by Albert Gelpi and Robert J. Bertholf, Robert Duncan and Denise Levertov: The Poetry of Politics, the Politics of Poetry (Stanford, 2006), an anecdote about doings at the Tallman’s during the 1963 Vancouver Poetry Conference:

Olson’s bedroom next door to Ginsberg’s, and Olson, who talked in his sleep, awakening to Ginsberg, crouched on the floor next to his bed with a writing tablet, trying to get Olson’s words. “It’s not enough that you steal all the attention,” Olson shouted [Ginsberg had been on the front of a recent issue of Time magazine], “but now you want to steal my dreams!” And then Ginsberg, with no hint of apology, “Yes, Charles, I do want to steal them.”

So saith Ellen Tallman. (Now, of course, even our cursèd reveries go for naught, “we” just skim the reiterative dream-gunk off the flat international Google pond, and call it our “own.” Ah, the abysmal monkey-work of (and for) abysmal monkeys. No identifiable spikes on the chart means the patient is dead . . .)

The Duncan / Levertov book comes out of a 2003 symposium marking the publication of The Letters of Robert Duncan and Denise Levertov. Other pieces by Devin Johnston, Aaron Shurin, John Felstiner, Brett Millier, and Peter O’Leary, amongst others. Most with a critical slant (as opposed to memorial).

Davenportiana. Laughlin, after recalling how, younger, he ’s “forbidden by Fitts to use terms from one art on another,” notes that “the way you ‘modulate’ your themes and ideas and quotes is like listening to Ravel or R. Strauss or Martinů.” And Davenport:

I wonder why Fitts didn’t want the terms of one art applied to another? It could be that it had become an overwrought gimmick. Whistler’s musical terms; Eliot’s; and the poets’ use of painterly terms (portrait d’une femme).
There’s an overlap in all the arts. The poet’s images ore visual, and his meter is musical, as is his language. My fiction is a kind of drawing.

Davenport reading Delmore Schwartz’s letters to Laughlin, and noting “originality” with “a heaping measure of the poets of the time: MacNeice, Auden, Spender, even Frost. It’s curious how differences and resemblances stand out only after an epoch is over. The famous patina of “period” . . . There’s no way of getting Aesthetics out of history.” (Thus eventually “we” shall note just how similar be the works of, oh, Charles Bernstein and, uh, Billy Collins . . .) And regarding the flux and palsy of repute:

The most interesting trajectories in time are those whose initial shine goes dull in a generation (I’m thinking of Kipling, Booth Tarkington, and O. Henry), lies low, and then emerges bright and fresh.
Both Hemingway’s tight style and D. H. Lawrence’s sloppy one are now in the attic. Neither had any sense of humor whatsoever; this tells a lot. The Terribly Serious writer is serious in relation to his age, and the eternal verities wear very different clothes from one age to the next.

Et voilà, mes earnestines (and I’m not talking about Hem).

Davenport trying (1993) to convince Laughlin to print Ronald Johnson’s “Ark (my title).” (Whether that phrase indicates D. offer’d up the title, or is simply calling it that—Johnson still uncertain to its monicker . . . Though, second thought, North Point ’d print’d ARK / The Foundations: 1-33 in 1980 . . .) Davenport says he “acted as Ronald’s info man while he was writing it.” And: “It’s kin to Supervielle in that it’s about creation. ’Sfarz I can understand it, it’s about the evolution of the eye (which Darwin thought was nature’s masterpiece) so that Nature could see itself.”

Davenport on cubism, and how it’s been “wrongheaded in the public (and criticial) mind”: “It is actually close to Ez’s ideograms: Braque trusts us to recognize a violin by a few details of its parts, just as Ez can work in a poem with a single Anglo-saxon phrase, or suggest a landscape with the wind through an olive tree. Braque was painting a particular culture (French middle class, that reads newspapers, drinks apéritifs, plays a musical instrument, and has well-ordered houses with furniture).” So returning content to paintings oft-seen only as formal jigsaws.

Laughlin noting how little Whitman he knows (“because Fitts didn’t like him and didn’t have us read him”). And saying that Basil Bunting’d told him Pound knew “Out of the Cradle Endlessly Rocking” by heart. “BB said that poem was the basic rhythm of the Propertius, and Ezra says somewhere, ‘I find myself using his rhythms.’”

Out of the cradle endlessly rocking,
Out of the mocking-bird’s throat, the musical shuttle,
Out of the Ninth-month midnight,
Over the sterile sands, and the fields beyond, where the child, leaving his bed, wander’d alone, bare-headed, barefoot,
Down from the shower’d halo,
Up from the mystic play of shadows, twining and twisting as if they were alive,
Out from the patches of briers and blackberries . . .

The primitive ages sang Venus,
the last sings of a tumult,
And I also will sing war when this matter of a girl is exhausted.
I with my beak hauled ashore would proceed in a more
stately manner,
My Muse is eager to instruct me in a new gamut, or
gambetto,
Up, up my soul, from your lowly cantilation,
put on a timely vigour,

Oh august Pierides! Now for a large-mouthed product.
Thus:
“The Euphrates denies its protection to the Parthian
and apologizes for Crassus,”
And “It is, I think, India which now gives necks
to your triumph,”
And so forth, Augustus. “Virgin Arabia shakes in her
inmost dwelling.”
If any land shrink into a distant seacoast,
it is a mere postponement of your domination,
And I shall follow the camp, I shall be duly celebrated,
for singing the affairs of your cavalry.
May the fates watch over my day. 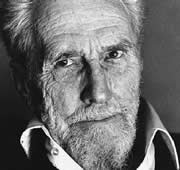