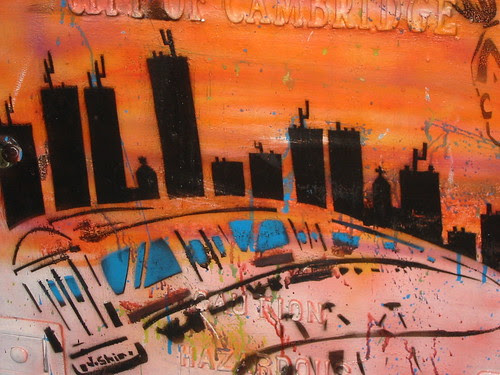 The bottomless ungovernable cold, reading the Davenport / Laughlin letters, mostly mid-’eighties. Davenport, about the “monstrous big story” in Apples and Pears (the one so-titled, with the subtitle “Het Erewhonisch Schetsboek: Messidor-Vendémiaire 1981”): “I was trying to be Fourier himself: using sets of ‘correspondences.’ Correspondences have a fascinating history: Jakob Boehme (from Jewish and mediaeval traditions) to Swedenborg to Fourier to Baudelaire to Joyce.” What triggers a sortie to the bookshelf—there’s where the long-sought, ill-remember’d Fourier quote must lie, is what I’m thinking, the one about relations, the one that I consider the “backbone” of metaphorical thinking, “how to write.” Erewhonisch! I find it nowhere! What I find is the Zukofsky epigraph (“A”—23): “since Eden gardens labor, For / series distributes harmonies, attraction Governs / destinies.” Which must be Fourier-quoting. Another string to unwind.

Too, in the Davenport letter (dated 24 March 1985): “Art knows things for the artist.” (Precisely!) And dumbstruck to learn that Davenport and Kenner disagreed on the matter, K., according to D., arguing D. “overdid my Grant Wood iconography [see “The Geography of the Imagination”], because Wood wasn’t aware of what I was showing. Of course he wasn’t. Monet wasn’t aware that in zeroing in on haystacks and the lilypond that he was painting the two states of French soil: the marshlands that had to be drained over a thousand years to get the rich fields in which hay grows.”

Finally, after umpteen meetings, I check the history of “logodaedaly.” (Laughlin praises a Davenport story, a “botanical pastourelle of tumescence,” with “What exquisite logodaedaly!” And I am thinking it’s got to descend out of “word” attaching itself to high-flying sun-struck “Daedalus.” And, sheepishly, got to admit I am perfectly dunderhead’d whence cometh all things Greek: oh, yes, Icarus, yes, certes. I do love how O.E.D. says, discreetly, “rare.” And how the word itself carries two “opposite and opposing” meanings—rather like “peruse”—both “cunning in words, ‘verbal legerdemain,’” and, more anciently, “a goodly shew and flourish of Words, without much matter.” Ah, logomachy!

And, Davenport trying to straighten Laughlin out about that sperm-fill’d brainpan of Ez’s:

Sperm is from brain to testicles in classical physiology. The mind was the lungs (phrenes) where the voice so obviously originates. The brain was a reservoir of oily gunk which lubricated the joints and made a solution for the seed. Ez’s theory is a wonderful mixture of Homeric anatomy and Romantic understanding of a Renaissance supposition about sperm and manliness. Newton attributed his great brain to never having lost a drop of sperm. (The folk belief was, and is, the opposite: that not expending sperm will drive you crazy.) What Gauguin and Vincent had their tearing fight over in Arles was these two theories. Vincent, a Dutch Baptist, believed that his genius depended on his chastity; Gauguin, a pagan, believed that his genius required a visit every day to the whorehouse over that pool-hall.

Which’s got me thinking about Cassius Marcellus Clay, Jr. (a.k.a. Muhammad “I ain't got no quarrel with those Vietcong” Ali) and some semi-clandestine yak with some neighborhood boy about the “issue.” No pre-fight boinking kind of thing.

And, what about Alfred Jarry’s 1902 Le surmâle? Hard to tell if Davenport is inventing or retelling—what jangled my “possible Pynchon-source” bell is the story of a French archeologist who “arrived in Tibet through a tunnel which he entered at Rejkjavik.” See the “iceland spar” search and passing through the earth’s interior in Against the Day.