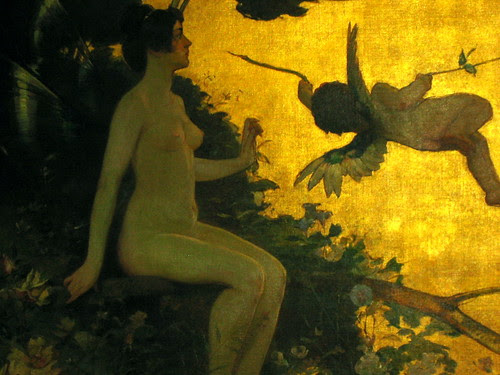 Accident and invention. One morning my ear interloped with Shirley Brown singing something about “don’t know how you’re going to take this / whether you be cool or come out of a bag on me . . .” Probably misheard. “Come out and bang on me.”

One night a blonde-reverie, receipt of a lengthy note with the word jambeable in it. Meaning something about a leg. Not that it mattered. It spell’d out for me another clumsy misapprehension: the imaginary blonde-in-question’s perfectibility vex’d by dopey orthography.

In Chicago for a couple of days. Humble and meticulous precisionist Charles Sheeler’s photographs, drawings and paintings at the Art Institute. Cityscapes and industrial studies: Ford’s River Rouge plant near Detroit. Loop projection of a film collaboration, Manhatta, with Paul Strand. Seriality of media: a photographic print redone in conté crayon, or in paint. Haunts and returns.

For feint and reprieve out of the hefty Pynchon, took along Cormac McCarthy’s recent apocalypse-fever addition, The Road. What McCarthy calls the “ponderous counterspectacle of things ceasing to be”: “The world shrinking down about a raw core of parsible entities. The names of things slowly following those things into oblivion. Colors. The names of birds. Things to eat. Finally the names of things one believed to be true. More fragile than he would have thought. How much was gone already? The sacred idiom shorn of its referents and so of its reality. Drawing down like something trying to preserve heat. In time to wink out forever.”

Writ in a pared down vocabulary, a diction of mudroom and ash. Degrees of gray. Elemental and archaic forms: “He descended into a gryke in the stone . . .” Blunt Anglo-Saxon-looking sops like “gritty duff,” “crozzled hearts,” “salitter,” “chert,” “masonjar.” A book seemingly stripped of Latinates, is it Charles Doughty’s Travels in Arabia Deserta that proceeds in similar manner? (Doughty: “The new dawn appearing we removed not yet. The day risen the tents were dismantled, the camels led in ready to their companies, and halted beside their loads. We waited to hear the cannon shot which should open that year's pilgrimage. It was near ten o'clock when we heard the signal gun fired, and then, without any disorder litters were suddenly heaved and braced upon the bearing beasts, their charges laid upon the kneeling camels, and the thousands of riders, all born in the caravan countries, mounted in silence . . .”) Mimical rhythms, like road-plod, like sea chop. McCarthy: “The weak sea light fell through the clerestory portholes. Gear scattered everywhere. A mae west floating in the seepage.” (A “Mae West” being an inflatable life jacket, WWII-vintage.)

McCarthy—in what one ’d call a “parable without depth,” a “shallow allegory,” so closely its referents cleave to a realizable world—calls out for a theology rooted in men and women and good works, not icon, not image, not a retributive distant angry God. Or, if God be angry, man must swallow down that anger, remedying it with kindnesses: “She said that the breath of God was his breath yet though it pass from man to man through all of time.” Against a memory of “rough men” who “opened up the rocky hillside ground with pick and mattock and brought to light a great bolus of serpents perhaps a hundred in number. Collected there for a common warmth. The dull tubes of them beginning to move sluggishly in the cold hard light. Like the bowels of some great beast exposed to the day. The men poured gasoline on them and burned them alive, having no remedy for evil but only for the image of it as they conceived it to be.”

How the “world to come” determines the world it discards behind it—that raw essential writhe of human vanity that fires our words ne’er so damnably put: “blackened books lay in pools of water . . . Some rage at the lies arranged in their thousands row on row. He picked up one of the books and thumbed through the heavy bloated pages. He’d not have thought the value of the smallest thing predicated on a world to come.” Extending, heartbreakingly, to the human himself: “. . . he understood for the first time that to the boy he was himself an alien. A being from a planet that no longer existed. The tales of which were suspect. He could not construct for the child’s pleasure the world he’d lost without constructing the loss as well . . .”

Or: “. . . each memory recalled must do some violence to its origins.”

Odd to see how “boxcutter” trails a terrible post-September 11 violence after it. The man finds a rusty one in a pile of tools and tosses it away. Only to retrieve it, open it with a screwdriver. Is it the methodical strain here that so utterly convinces one that the boxcutter’ll figure in some bloodiness later? “He took out the old blade and laid it on the shelf and put in one of the new ones and screwed the handle back together and retracted the blade and put the cutter in his pocket.” Turns out a red herring.

In the oaks two smallish crows sawblade a caw back and forth, nag an accipiter to wing.

How bizarre the bookscape looks, sprawl’d out across the corner of one’s work table, returned to after a mere ten days or so. How fickle one must be! What’s that Thomas Bernhard doing there? I’ve never been less interested in Thomas Bernhard! Today I covet anything by Wilson Harris and Daniel Albright’s Untwisting the Serpent.