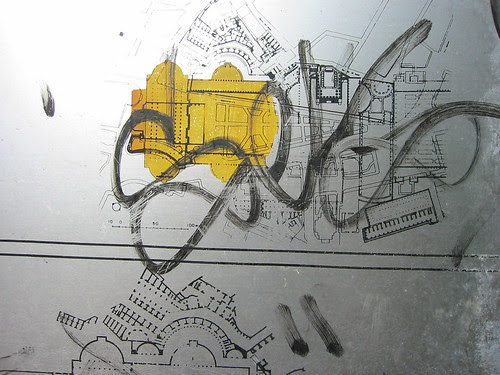 The rhythm of the thing is off. Home to an uncanny lack that houses no precipitate. That’s the way I say I’m stymied. Though I’m not. Some fool unfurling’s always available, deep-voiced, Arthur Godfrey-style. Whether it’s the particular flag for the day ahead’s another story. When in doubt, plow into the abrasive embrace of prose, its pucker’d up embouchure. See Finnegans Wake, allus a redeemer. “(Stoop) if you are abcedminded, to this claybook, what curios of signs (please stoop), in this allaphbed! Can you rede (since We and Thou had it out already) its world? It is the same told of all. Many. Miscegenations on miscegenations. Tieckle. They lived und laughed ant loved end left.” Or swerve, swayback’d and hipjoint’d out, a pivot-mister, eyes awhite and globular into poetry’s.

Pecking through Graham Foust’s latest—Necessary Stranger (Flood Editions, 2007). (Design’d with usual élan by Quemadura, with a cover painting titled Half Mast (2001) by Brian Calvin. The latter—in a rather high Lynda Barry inept style—I persist in thinking of as a portrait of Foust, defiant-sad, tentative-severe, rheumy-eyed and kind, though I know him not . . .) Foust’s a master of pump and pivot, cutting a jagged edge with most every turn of line. A verser. Here’s “In the Space Provided”:

On a near-
suicidally clear
day of wind—

I wake to find
that a season
has been detonated.

Planet’s automatic.
That tree’s a gust
of blood.

Now, a whole shebang of things occur here. First: impeccable pacing, how the sweet vocable clear coming after the hyphen hanging near- and the way suicidally demands specific slow mouth contort forces a slow beginning, a savoring of the little rhyme. Next, “day of wind” (not splendid in itself, though wind provides a balancing eye-rhyme with the incipient find) gets its comeuppance in reiteration, the repeated “a day like / a day like” demanding examination for sense, the mind going into a momentary stutter as if the vertical hold on the television were on the fritz—how is a day like television? And how’s a day like that day? Something about ease and repetition, or automaton and automata, the rehearsals of time filling all available space. That season-detonating boom, nigh-concurrent with waking (“Planet’s automatic”), provides just enough violence to turn the autumnal tree’s foliage into “a gust / of blood” with no danger of gratuity. (“Earned,” as one used to say in workshop.) Consider the poem exemplary. (Removed: a note about Anna Karenin throwing herself under the train—that “gust” making me think of it. When I check the Rosemary Edmonds translation there is no blood, and besides I never completed the damn book.)

How about another Foust, one titled “Number One Hit Song”:

The above is leaf-math,
a high
block of cottonwood.

I am for volume,
I am for tubes in and out of the sick.

If heaven were only
where only
you could hurt you,

I would touch its dead and broadcast
their entire range of breakage.

I would breathe to within
a skin’s-width
of my sleep.

I would make a little nimbus there,
a clear heart for moths to toss against.

Late and unancient, inexact
as hands, I would move
as if by choice into my life.

Again, resistance to “breakage” in a back-sense of time’s relentless breaking over one’s life. A less propulsive logic here, more fitfully-wrought, as “befits” the somewhat larger structure. The “above”—that “leaf-math”—points nigh-simultaneously to the cottonwood itself, the title with its numerical claim, and “heaven.” The “volume” with nearly as many referents—loudness (of “hit”), size (of capacious “cottonwood”). A similar kind of repetitive device here (like “a day like”) slows one into fierce examining: “were only / where only / you could hurt you.” Hence, the dead of heaven (the dead of heaven!) ’ve moved somehow “as if by choice” into their deaths, graced, honorable, clear. As such, the piece offers up a model, posits something like a way to live one’s life. Not to offload (meaning “dump”) a predigested lineage on Foust, or on the particular poem—that’s a maneuver I’ll leave to one of “our” more insistent (meaning “pushy”) commentators, a swelter of names in lieu of close reading—. One’s reminded, though, both by the “skin’s width” and final lines of affirmation, of James Wright’s “The Blessing” here: the Indian pony’s “long ear . . . delicate as the skin over a girl’s wrist,” the remarkable sense of a body about to “break / Into blossom.” In Foust’s final stanza, the willfully clumsy pile-up of “Late and unancient, inexact” undoes itself with speed into a gracile caress of labials and susurrus: “I would move / as if by choice into my life.”