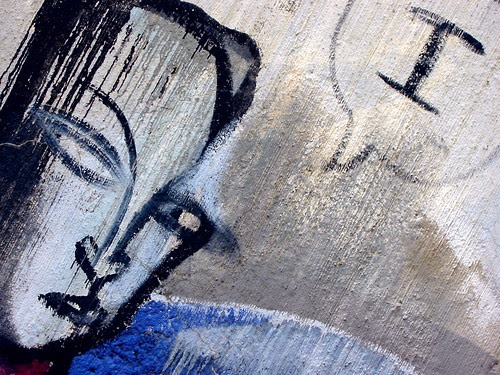 A Wall (The Lyric I)

Whence cometh the urge to gussy it all up? What the American footballers call “piling on.” That too-too dysenterious evacuation opposed to the anemia of “plain speech.” (Medicinal antonym-mischief warning.) Here’s a poem out of Daniel Tiffany’s Puppet Wardrobe, a new book in Jon Thompson’s on-charging Free Verse Editions, print’d by Parlor Press:

Girls wear nightclothes and sometimes sleep
in liquid form, en route. Black baby grand.
Tart, blue-blind, plum-like fruit of the sloe,
she missed her second fitting. Were it not so.

Beuys calls from Hamburg. Evening. Light dying.
Though she may wander from her own kind.
Speculation leaked to rival. Car waiting.
Key where she said it was, as per flame job.

Swiss plates & papers missing—fuckwad—two days
to go, car trapped inside Germany. Prophetic dream
according to the place. Back under Mistress A.

The thief must know me. Descend on Baltic port
for mezzotint. Some trick to it. Try giving
it away on the streets. Must make night ferry.

A kind of fraught “fourteener” of the spy-caper movie set? Interpol and art intrigue? One is rather dubiously reminded of some of Auden’s short narrative-besmirch’d pieces, something like “The Secret Agent” (“Control of the passes was, he saw, the key / To this new district, but who would get it?”) Or, the abrupt staccato rhythms and the rather recherché details (“Baltic port / for mezzotint”) point vaguely in the direction of Hart Crane, say, “Brazen hypnotics glitter here; / Glee shifts from foot to foot, / Magnetic to their tremolo. / This crashing opéra bouffe, / Blest excursion!” (Though, Crane mired such histrionics in the myth-historical, whilst Tiffany’s example here is on the order of the bibelot, the bijou, the toy? An essentially functionless machine made out of words?) Or, old beasts of the burdensome ’seventies like myself ’d claim Mick “Shatter’d” Jagger’s the cantilever hoisting the poem forth (“I can’t give it away on Seventh Avenue.”)

Okay. There’s a sure hand here, emphatic control (“Must take night ferry”), a story (even if mostly irretrievable in its particulars, relying on what Crane calls “the dynamics of inferential mention”) getting told, nods of acknowledgment to the “Old Masters”—why’m I so jumpy around the piece? (Lord knows I am no Beau Geste for the “plain.”) Stumbling through an interview with Charles Wright yesterday, the interviewer mentions how Wright’s written (in Quarter Notes) that “there is no great art without great style,” and that “all major writers are great stylists.” Something I nod agreeably with. (And I would certainly say Tiffany’s a stylist, identifiably—he is pushing the language hard in a recognizably gussy direction. Not a definition of style, though one way of attaining it.) Wright resorts to allegory in answer to a question about the “risk” of such a push. He says:

And points to the need, finally, for a homely kind of poem: “egoless,” something to “fit in your back pocket,” “iconized and objectified,” “apprehensible.” “Samuel Becket says it definitively—“Fail. Fail again. Fail better.”

I put Wright’s words under such scrutiny largely because I consider him one of the “gussiers up,” align’d with Tiffany in that sense. I read Tiffany with such caution (and difficulty, that spooky difficulty of mirror-writing) because there’s an undeniable kinship in the work to my own (insufferable) ditties, a letting-go to the temptings of the showy, the lingually-besotted, poems that run on grease, spraying grease. Which is to say that Tiffany’s book gets the brunt of my own doubts—unfairly. Here’s another poem:

Powdery timbers
jutting from beds of marl
and trash, columns
blurred to brackish lines
diced in a foot of water.
Greetings, old business,

ham hound crave:
our guide strolled back
barefoot into the haze of the ruined arena.
He drew a map in the dirt.
Heard something, say a woman and a dollar.
Ain’t said a mumbling word.

The drone of a lumber scow
rose from the estuary:
the listless, the lollers
stirred in the shade,
each face a bead in a blackberry’s comb,
glazed, glowing like a wick.

Easier to see here Tiffany’s facility for metaphor and accuracy of seeing. Particularly in that “diced”—how wavelets’ll slice up a reflect’d post. There’re tamer things in Puppet Wardrobe—some terrific list poems, for example. There’re, too, wilder—a series of loopy playlets with characters like “Flower-de-Luce,” “Plank o wude,” “Tragic Mulatto,” and “Lord Byron.” They say things like “How dare she!” And “Ale-Hoof, Candy Tuft, Sauce Alone.” And “Whatsoever bloweth on it / will give the picture / of whatsoever he is / naturally addicted unto.” And “Consult the Bee Maidens.”

I note one book in the “Program” of source-texts in the book’s back matter: the Catherine de Zegher edited Prinzhorn Collection; Traces Upon the Wunderblock (The Drawing Center, 2000). Art brut drawings and writings out of patients at the Psychiatrischen Universitätsklinik in Heidelberg collect’d by German psychiatrist Hans Prinzhorn (1886-1933). What the onslaught of language’ll do to one nowadays, nous sommes tous les débiles mentals. As Tiffany’s got it: “The rime fell thick and we was covered / white as a sheet when we got up.”