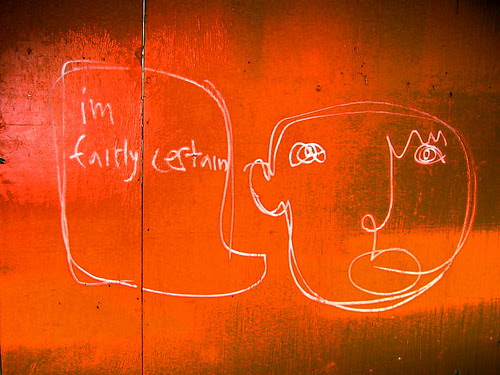 Dr. Johnson defines “tid”—“Tender; soft; nice” and “to tiddle, to tidder”—“To use tenderly; to fondle.” “Tidbit” only gains notice in the fourth edition: “A dainty.”

The OED deems “tidbit” divisible: a) “A small and delicate or appetizing piece of food; a toothsome morsel, delicacy, bonne bouche”—“A tyd bit, i.e. a speciall morsell reserved to eat at last” (c. 1640) and, b) “a brief and isolated interesting item of news.” Rabelais, translated by the indispensible Sir Thomas Urquhart (1694): “He promis’d double Pay . . . to any one that should bring him such a Tit-bit piping-hot.”

The Romantic task we ply
whether to do good or to feel good
runs out of gambits after a while
and you’re left with the visionary experience of
simply being yourself, a pouring forth
that becomes myth without explanation
alert to the moment, bleeding slowly into life
whose figure is god of both war and knowledge
in which there is a pattern of contradistinction,
what can be known in the present as equally
what there is left to know, both of which
point to a center and an edge as completely
attached by their arc and its circumference
which together describe the word we do to earn it

And a snip out of John Olson’s essay, “The Fabric of Fabrication”:

Society’s arrogant certainties infect us, distort our perception. The paramount task of the artist is to rip these assumptions apart so that reality may be more immediately grasped. So that we see what is truly out there. An orchid in the Congo, bottles of balm loaded on a pallet in Guam, chunks of shark meat tossed on a scale in Madagascar. . . .

Art is the hacksaw by which we work at removing our bars. The prison of our assumptions.

The fifty-seventh number of House Organ. Meaning probably about fifteen years of commitment to it by Warren, assuming four per year. A terrific model of cheap print work: six xerox’d sheets of typing paper, fold’d in half long-ways, one staple to bind, another to keep the pages shut for mailing, back cover address’d and affix’d with a 39¢ stamp. Work, too, by Bill Berkson, Clayton Eshleman, Russell Atkins, Albert Glover, Harrison Fisher, among others.

We were living in Greystones, County Wicklow in the 1940s, and Samuel Beckett’s uncle Gerald and his wife, Peggy, were next-door neighbours. I met their son, John, and he lent me four books, among them Beckett’s Murphy. The others made no impression on me, but Murphy raised the hair on my head. Murphy was the business. . . .

I wrote Sam a fan letter about Murphy and John Beckett said it’s no use writing to Sam, he never replies. But he did reply, though it was no use to me because I couldn’t make out the handwriting. The calligraphy was a beast: the hasty hand of a hard-worked doctor firing off prescriptions. Eventually Peggy Beckett, the mother of John, deciphered it as: ‘Despair young and never look back.’

I remember having tea with the [Joseph] Hones one day and they said what a difficult guest Beckett was. He had come round one evening and Mrs. Hone said, ‘Sam, the dogs have pupped.’ And Sam said, ‘I’m not interested in dogs.’ ‘The cat has . . .’ ‘I’m not interested in cats.’ No matter what subject came up he wasn’t interested in it and he relapsed back into a heavy silence which they were doing their damnedest to break up, and it wasn’t having any effect whatsoever. Anyway, at the door he gave a limp hand to Mrs. Hone and said, ‘Friede, Friede,’ and she said of course, ‘My name isn’t Freda,’ but [Arland] Ussher happened to be there and said, “It’s the German for peace.’

That a half dozen or so years before Waiting for Godot. Out of Beckett Remembering Remembering Beckett: Uncollected Interviews with Samuel Beckett and Memories of Those Who Knew Him, edited by James and Elizabeth Knowlson (Bloomsbury, 2006). I noted yesterday, too, that Pascale Casanova’s 1997 book, Beckett l’abstracteur: Anatomie d’une révolution littéraire is coming out translated into English. Casanova’s The World Republic of Letters (Harvard, 2005), actually written after the Beckett study, is excellent, if Parigi-centric—how writers and texts become world-canonical.