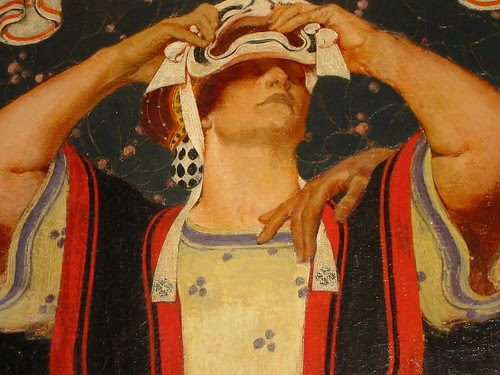 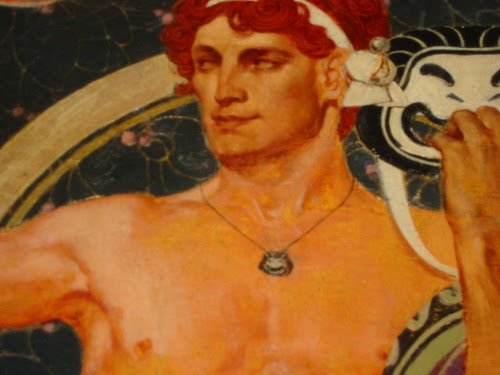 After reading Bill Berkson’s opening salvo, a reprint’d commencement address call’d “History and Truth,” in the initial issue of The Sienese Shredder (edited by Brice Brown and Trevor Winkfield), I hesitate to strait-jacket the magazine with anything so fussily adroit as a “capsule summary” or a “quick-limned lineage”—tempting though that be. (Reading “works”—that is, “makes meaning,” by slotting things into arrays partially made by other readings: par exemple, my reading of Ron Silliman’s remarks about the Shredder and its lack of a “manifesto” ’s is dogging me like a hound hungry for a soup-bone.) Truth is, I read Berkson’s piece as manifesto, or, more to the point, anti-manifesto. And that throws down the gauntlet, challenging one to read precisely against the ruthless grip of one’s own pious knowledge as it is inevitably distill’d into preconception, tag, and etiquette. Berkson, after noting Stein’s 1923 conclusion, “Let me recite what history teaches. History teaches” and Robert Smithson’s warning that “All clear ideas tend to be wrong” and admitting to being “nearly crazy about facts,” writes:

What is so appealing about a fact is often its inconsequentiality. . . . Some facts, I believe, exhibit their true colors best by remaining beautifully, resolutely pointless. Authoritative history, however, has no appetite for pointless stories; thus, each fact is liable to be confronted with a preemptive glare or squint, the Muse of History’s vast, groaning, imperious “So What?” Without that “what” there’s nothing teachable.

Ah, the rankling of predigest’d pedagogical authority, that’s why that hound keeps barking . . . Berkson is clear about the proper uses (and damnable misuses) of that authority:

Art historical logic, museological practice or the arguments of art critics are good so long as they direct us back to the works under discussion with their facts illuminated—and they are bad when they direct us away from the work in favor of an overarching—and sense-stultifying—idea. . . . there is that type of museological thing where art functions to flesh out only our “museum” idea of things—down the enfilades, as it were, phase by phase.

So—avoiding the phase, the preconceit, the overarch (though ever-willing to muster up whatever relational tics begin jerking—“say, that Shirley Jaffe’s jazz-swatching recalls poor Stuart Davis, though occasionally a little of the Lichtenstein-quoting-art-history pieces, no?”), one proceeds, hunting and peckingly into the gorgeously printed work.

John Ashbery: the boyhood home in Sodus fill’d with J.A. paintings, works of the child artist stuck amongst grownups in downtown (Rochester) art lessons, and other works, Ashbery a painter first. Isn’t that it? What’s striking about Ashbery’s postcard collages (there are fourteen included in The Sienese Shredder, all in color, according to the note “executed in the early 1970s”) is how demur and considered they seem. Quiet (sauf one oddball, with Jerry Lewis leaping, tongue slap-lappingly out, above the foam of a waterfall named “White Head,” that goes demonstrably for camp snort and chortle—though, even there, a rose cathedral window is seen practicing “restraint” in the background). The “interventions” (gluey additions) minimal. On a hand-tinted photograph of a small reservoir (with ordinary fountain) in Rochester’s Highland Park, the head (emerging out of the water) of a kitten large-eyes a spool of thread. A pompadour’d man in a suit and tie, mouth with cigarette and pout-frown, eyes fetching nothing fetchable, is shown halfway down (or halfway up and out) a stone well—“Wishing Well, Ramona’s Marriage Place, San Diego , Cal.” In the sky above the sweep of bathing beach at Biarritz, a disc-shaped street-grating of some sort hangs like a UFO whilst below a sepia ark appears to run aground—in the foreground, two women turn away, the younger one with an ace of clubs tuck’d into her skirt-front. A girl-child—vaguely familiar, perhaps a newspaper comics heroine, almost Dargeresque, though wholly innocent—stands intently in a birch grove, looking.

Caught now thinking how one’d see the collages if the name Ashbery weren’t attached. (One thinks one’s patience for collage is nigh exhausted—who does Berkson quote as saying “What we need now is less Duchamp and more Cézanne”? Vija Celmins, with Berkson framing it a contretemps between blithe skepticism and earth-pulled sincerity. Or one recalls one’s recent disappointment at learning the Joseph Cornell boxes at the Art Institute in Chicago were off limits or AWOL or something . . .) Is it that too much of collage is “merely zany,” worth no more than a grimace-chuckle? Cheap irony? Is it that it’s needled its way into ad-baskets and the weeklies?) The Ashbery collages, look’d at all together, manage a lilt and melody somewhere between jokiness and, oh, feeling, the tilt, I wager, toward the latter.

Here’s a poem by Chris Edgar, one of four in the issue:

In the margins of the fairway
A second-story man seeks the dark fantastic
That lurks within the contemplative life,
Rebounding with the strength of twelve men
To cajole the five iron to new highs.
Once the procession of the equinoxes
Comes back down to earth, jarring
The insane root that holds sway
In the minds of many, the autumn foliage
Sees you in the rough,
At sixes and sevens in the bright
If cloud-studded New England day.
This is no two-man show
Whose rich dualism cannot be missed—
An entire fleet of people are counting
On you to deliver the emotional Velcro,
A human thunderclap to shake the trees.
A vertigo in which the buzz is all around,
Reaching the dogleg, one must field
Many tough questions, the paranormal romance
Only ends to begin again, as it is the rotation
Of the ball that matters, the lip meeting the hook,
Hitting the ground to jog past the bean counters
Before fading to the left, relax the hips and shoulders,
Stop and breathe a moment,
This buzzard is a turkey shoot,
No thoughts of negative capability here
Or you may shank everything.
Instead, learn to be instrumental in the process,
Read the waters one at a time,
The bird is in your hand, think wood.

What one wonders, bumping amusedly along here through veers and dictions (“To cajole the five iron to new highs”? “emotional Velcro”?), is whether Chris Edgar is a golfer, and one begins to doubt it, though, knowing that the only occasion where one oneself ever want’d to play golf was one rain-roof’d Michigan day in the midst of reading Toby Olson’s Seaview, one can only contemplate without knowing. (I learn’d the word divot, a fave, in Seaview.) There’s a sense here of Edgar trying out a (foreign?) lingo for fun, another sense of trying to ballast up the piece with numbers (for fun), another (jokily, a “sleeper,” though occasionally “protruding”) of golf as sexual gymnastics (“think wood”), another of golf as poetickal gymnastics (though here, with “No thoughts of negative capability here,” is where the piece may go momentarily coy). Sounds—I long to say “abound”—they do not, Edgar isn’t proceeding so much “by ear” as by assembled choice bits of golfer’s demotic—but the terrific “paranormal romance” indicates just how possible the former approach ’d be.