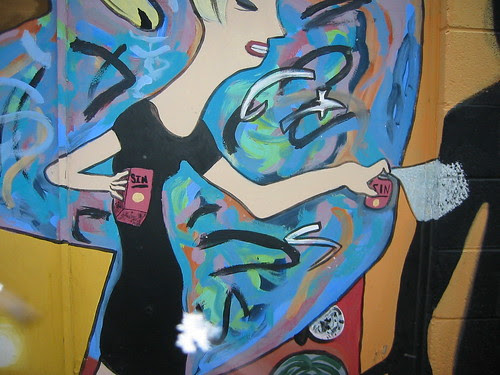 Am I adrift or awash? Aimless or pedigreed? One caroms off oneself in one “station”, off nothingness (or plethora, its one veritable mimic) in the other. Champagne Delbeck (Reims) or La station Rennes est fermée au publique. “Style is mostly a form of conflict.” (Jean-Michel Espitallier) “Whatever diminishes constraint diminishes strength.” (Igor Stravinsky) A woman in orange with fiery hair. (Une affiche publicitaire.)

Hazarding a trial, tossing down the nickels. “The true genius of poetry is lyric and imagistic. It lies in concision and allusion, something withheld but partially glimpsed.” (Charles Wright) How make visible a memory? If not through a conceptual plug, pull’d out of landscape. That Norway spruce with the crow teetering up in the breeze. That melodic toodaloo—toute à l’heure! Music is time’s way of being bidirectional.

Jamming, or working with a fakebook? Susan Howe’s detail about Jonathan Edwards on horseback making the pastoral rounds, parish to parish, how when “ideas came to him he would write them down on little slips of paper and pin them to his clothes. I imagine him arriving home after several days’ absence covered in bits of paper.” And Wright again: “Most everything is representation . . . after it goes through the little grinder and hits the paper.”

Morton Feldman talks about the inevitable effect of one’s instrument. “Chopin’s piano sounded just like Chopin—that he never really played loud. The piano cannot play loud. That he made a mezzoforte sound big. And because of the level of the piano, that what he wrote on that piano was the best that sounded on that piano.” Determinant incapability: so the earnest tigers who fang chunks of lyric, big heads tossing all bloodsprayingly. Incapability as neurosis.

Wyndham Lewis noting how much “adventitious sentiment” makes up our appreciation of anything. A taint accidental, unholsomely sung. That one’d admire a piece of writing as writing: that’d be unbearable, a wholly caustic adventure, and inhuman. Carlyle: “When a man first strips himself of adventitious wrappages; and sees indeed that he is naked.” And if one’d so strip a poem—it’d depreciate to nothing, a garble, unspiced refuse.

Idiot ships cleave the waters. Gumpism, “suddaine dumbs,” toadying (and its schoolmarm smarm) afflict the local denizens, who wallop themselves up into mighty lathers of senselessness, “experimenting.” Bouts of dull-Willy irony, beyond cluckable. Asinine regal sass. Bobble-headedly going along with the dominant flux and phlegm of things, sheepish in cony-duds. High audible hums whilst the earth burns. Feigned flibbertigibbeting in lieu of “Quick, Henry, the Flit!”