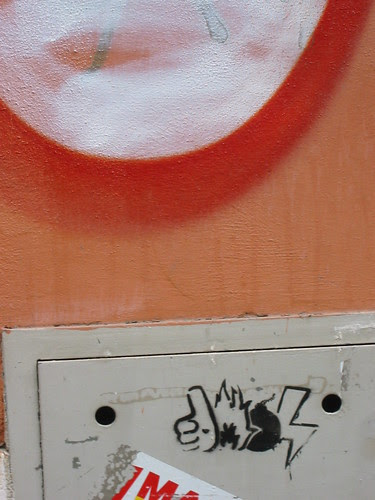 Max Jacob (b. 11 July 1976 at Quimper, in Brittany, rounded up by the Gestapo on the morning of 24 February, 1944 at the monastery of St.-Benoît-sur-Loire), pal of Picasso (who, according to some stories, might’ve interceded, and didn’t), recipient of a vision of Christ (“There was someone on the red wallpaper! . . . He is wearing a robe of yellow silk with blue cuffs.”) wrote the prose poems of Le Cornet à dés (The Dice Cup) (first publish’ed in 1917) in the “Cubist” years between 1903 and 1910. Applying Cubism’s new-mint’d notions of simultaneity, fracture, and onslaught to the prose poem, daubing up structures sentence by sentence, or block by block (See, in particular “The Cock and the Pearl” (translated by Bill Zavatsky):

I thought he was bankrupt, but he still has slaves and stacks of coins in his house. On the rocks, the sopranos were half-naked in their swimsuits. In the evening we climbed into coaches and the little trains glided beneath the pines. I thought he was bankrupt! . . . he’s even found me a publisher! the publisher has givin me a turtle whose shell is pink and varnished: the smallest ducatoon would do me more good.

You’re going out? you want your sickness to be noticed: lanterns on casters watch you and the zebra on rockers ends up making you dizzy.

I hereby declare myself world-wide, oviparous, giraffe, haggard, sinophobic, and hemispherical. I quench my thirst in the wellsprings of the atmosphere that laughs concentrically and farts with my uncertainty.

Not all the entries reel so kaleidoscopically—here’s one: “Her white arms became my whole horizon.” And, as if explicating its own procedure:

When one paints a picture, it changes completely with each touch, it turns like a cylinder and is almost endless. When it stops turning, that’s because it’s finished. My last one showed a tower of Babel in lighted candles.

Announcing the gregariousness of the work, its deft all-embracingness. “Bag into which anything placed ends up belonging.”

Out of Jacob’s “Preface of 1916,” dismissing the precursors (common strategy of the manifesto-ing) after a nod to Rimbaud:

. . . the authors of prose poems can’t use him for their model because the prose poem, to exist, must submit to the laws of all art which are style or will and situation or emotion, and Rimbaud only leads to disorder and exasperation. The prose poem must also avoid Baudelairean and Mallarméan parables if it wants to distinguish itself from the fable. It’s understood that I don’t consider as prose poems the notebooks of more or less curious impressions which my excessive colleagues publish from time to time. A page of prose isn’t a prose poem, even when it frames two or three lucky finds. I would consider as the said “lucky finds’ those present with the necessary spiritual margin.

The mark of literature is that it bears no resemblance to Literature: we write a masterpiece only with that part of us which is distinct from Literature, creating by that very distinctiveness a new literature. Think a page; set it down in writing when you’ve examined it fore and aft. Many are called but there are few chosen to be found in Paradise. That sentence from Scripture means that you have to be exceptional to earn your way into Paradise. Literature bears ample witness to this truth. Only the monsters get into Paradise. So make your brain an abscess: when the abscess is ready, you’ll be operated on. But if you don’t put yourself through this process of cerebral congestion at your age, when will you?

In a country where the public sale of pictures takes place in a courtyard, the frames were laid out on the ground, and the surrounding three hundred windows, rented out by their owners, were filled with butchers. It was as if they were there for the guillotine! They were there to see the death of art and happiness. Several of the butchers at the windows had binoculars.

Translated by Ron Padgett. (And somewhat fabulistic, counter to Jacob’s own intents and dicta.) The book that ought be reprinted, and made complete. The other translators: John Ashbery, David Ball, Brownstein himself, Zack Rogow, and Zavatsky.