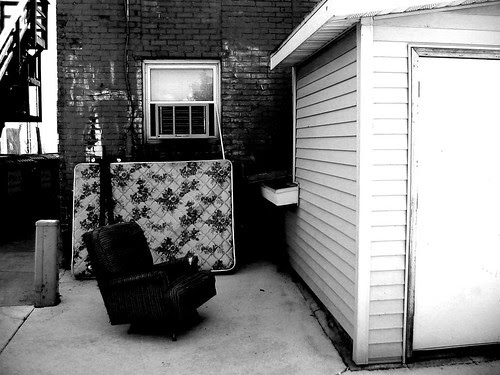 Dutiful to a prematurely form’d notion (of anything), how dull ’ld that be? Countenance set in a determined rictus-grin, self-satisfyingly tame to oneself, pencil poised to the copybook. Fill in the blanks. Sans doute and sine numine, some of “our” “major” “players” “work” that way. All perseverance and economy, nothing spilt. A hatbox full of “slips,” and no hat. No megrim ache of begrimed witchy-smithing, no slaughter-laughter (thank-you, Vladimir). (Now it’s just me gussying things up.)

First whiff of Jack Spicer—in 1975—when the Collected Books shot down the pike, thought I found me a coeval. Another messy drunk, a tosser. My “community” built one dead man at a go. That he’d say things like “you have to go into a serial poem not knowing what the hell you’re doing” and “You have to be tricked into it, it has to be some path that you’ve never seen on a map before,” made such undeniably foolproof sense one wonder’d why anybody needed voice it. That “outside of you which is writing poetry,” that fit precisely with what I’d witness’d myself doing in moments of total absorption. (The revery is not of the Bernsteinian poem made of stuff that cannot be absorbed, but of the poem that wholly blots its own author in the blast of its making.) If Thomas Pynchon reckons History to be “Time’s pathology”—a kind of invasive pox on Chronos’s pure unregulated passage, I’d argue (stepping, willingly, into Burroughsian viral muck) that language is what assaults the self, casting it (as “in bronze,” finally and immutably “done” by language; as, too, “forth,” out into the world, a seedling, a radio wave, something made evident only by its dispersal, as the self so sorrily is—doesn’t Whitman say “rude, mystical, rutting, bent”? or is it “palm’d off, petulant, bust’d flat, Baton Rouge’d”?—the deniers of adjectival oomph ought “revisit” Mr. Whitman in’s filthy parlour, no?), and catastrophically. Disease streams of prose and oceanic fevers belling forth. Of course, one’s talking about optimum maximal “states.” Nothing immediately, guar-an-damn-tee-ably, is certain, or swift, plunged into of a late dog-tired Thursday.

Bluh. Nothing better’n the jam, the sticky Platonic form of it. How it waits for the moment it’ll submerge its drivers in the big river’s drink, river wherein one is cleansed by drowning, and so constituted anew. (Merleau-Ponty: “Attention is . . . the active constitution of a new object.”) That’s the only community that matters. The rest is small talk and weather report. End of processual exegesis. It’s a thing that doesn’t “take” to relentless overdetermined public sorties. Is liable—push’d to exasperation (hunh!) and limit (Good God!)—to fall into doggerel like James Brown’s or Gertrude Stein’s:

Just when they ask their questions they will always go away
Or by this time with carefulness they must be meant to stay
Stanzas in Meditation, IV