The Thump of Angels 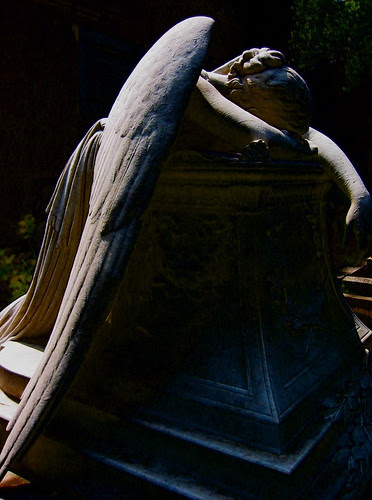 
About ten years back, noises about a book by Jack Clarke, From Feathers to Iron (1987). Clarke, a Blakean and Olson-overlapper at Buffalo, who died in 1992. I think I attempt’d to uncover a copy of the thing, out of some celestially-descended belief that it’d render itself essential, and never did find it. The clamor of a single book so easily succumbs to other, louder bookish clamors, casualty of the age of books. So—good to bump against it again whilst rustling around in Robin Blaser’s essay, “Bach’s Belief,” in The Fire. He quotes Clarke’s insistence that one must “know with Homer, that home is not a location but a narrative activity,” ringing a change on Olson’s own “Movement or action is ‘home’—what I persist in wrongly remembering as “The way the way home is home.” (Or maybe that ’s me—didn’t I scrawl out something about St. Augustine of Hippo that went something like that? Boffo concerning all negligibles thieved or borrow’d.) (Slow snare brushwork for backbeat on my brainpan’s “trap” set: some previously Blaser-quoted Pagany-publish’d “Manifesto” of Williams, saying how, when “bizarre derivations multiply around us,” one turns to “the word, a meaning hardly distinguishable from that of place . . .” Think of Williams post-Pagany, skinting back to the States, nose-thumbing old addled Europe, determined to make the local trajectory “home.” Which is jim-dandy and admirable up to the point that the stench of home’s imperium sets up camp in one’s own nostrils, a stench metastasizing and bunion big. Where’s the imperative of “home” then?

Blaser, quoting John Thorpe’s “Prologue” to Clarke’s book, where Thorpe, ellipses-mad, cites Clarke’s lectures: “You apply textual pressure by using at least 5 different analogues simultaneously . . . Don’t take from systems which don’t have to do with your experience of otherness . . . If you want a text to be a door to the present your must posit the world of its construction . . . Only the heat of one’s own discarded elements can produce the proper fire . . . Otherwise it can become an occasion for speculation or, worse, fundamentalist belief.” Which is ample enough in its contradictory to warrant an exam. Clarke, directly, is equally mystificatory, though capable of throwing out projectiles of spark-showery prose (emend’d, here, by Blaser):

What I’m trying to do is clear poetry of religion. Images bind the mind to the “Wheel of Religion” (Jerusalem 3: 77, 13) directionally moving “west to east, against the current / of Creation.” If you have a burning desire to get past the “lyric block” [Olson], then you know you need, not the myth of America, but a way to restore narrative to image. You can’t do this by grinding out poems from a broken Sampo [the Mill for the Kalevala]. Nor can you look to European epic, Virgil to Milton, because after Whitman it’s not “ground” anymore, it’s all “figure.”

Blaser’s not terribly helpful here, though he does say being “clear of religion” one is “freed into uncentered relations among things—which may be as big as a cosmos or as small as a pebble—” before veering off into the dictionary—another kind of “home”—and claiming that “an ethic of otherness” resides—etymologically—in the word belief. Unnh. Miriam Nichols, in commentary, notes how Clarke, early in From Feathers to Iron, defines the Finnish “Sampo” as “‘the setting and scansions of time’” and continues: “He interprets this to mean the rhythm of a given cosmology. A “Sampo” can run down, at which point the Kalevala poets advise that ‘the only thing to do is make it into a harp, string it and sing songs of sadness at its passing and songs of joy heralding the new.’”

So one stands in the hard rain of what one clearly cannot comprehend out of what? I am not one for systems, not one, truthfully, for rationcinatory mugwumping anywhere. My sense of H.D., Duncan, Blaser, to some extent Spicer, too, (though I suspect he avoid’d the most deleterious effects of “system-building” by alcohol-the-redeemer, the way it dismantles the “wrought”) is one of a terrible need for the “imposition of an order.” Blaser, in “The Practice of Outside”:

For us, outside the strangeness of poetry, discourse has been accepted as an act of language between ourselves, an agreement of logical structure that turns out to be our imposition of an order. This amounts to a closure of language, which brings it into our own limit, and ultimately that discourse will die as a man does. It does not entangle us with the world. The death at the center of such discourse is extraordinary and begins to let us see the extremity of our condition.

Recognition of what Duncan calls the law of the “the”—a death in grammar, each word in succession in a sentence delimiting the possibilities for the next, diminuendo to vanishing. Is it that, stung by such recognition of loss of the world, trapped by language, one is prodded to seek out a different system? A system against a system? If one tends to terminal idiocy in the considering, batting at raindrops in the yellow slicker, writing oneself into a thicket of expletives, or horning The Fire into the fire in reluctant disgust—