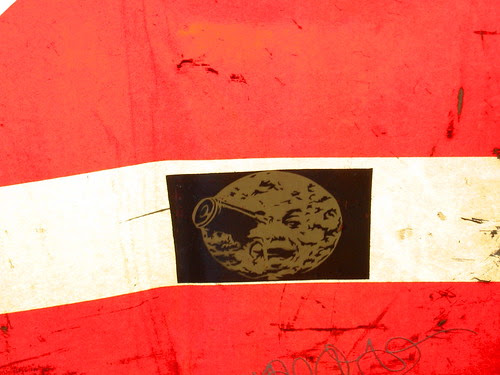 Integration effects. If a poem’s liable to be construct’d of pieces, jalopy style, that “everything put in the bag ends up belonging,” why not a novel? Narrative, too, in pieces. An arrangement of stories against time, its devouring. Endlessness of story. Still pestering Against the Day. There’s a possibility that I nod too giddy, idiot-style, for anything that reeks of the self-referential, anything that acts up metaphorickal-like, pointing to how to read itself. Okay, consider. Late in the novel, Chum of Chance Chick Counterfly, out somewhere mid-curve of Santa Monica Bay, visits “a complex of galvanized sheds and laboratories . . . a research facility run by two elderly eccentrics, Roswell Bounce and Merle Rideout.” (What the two’re doing there—and what some Hollywood thugs’re out to stop, or steal—is bringing still photographs “back into action . . . even back to life.” In Bounce’s deploy:

. . . every photographic subject moves . . . even if it’s standing still. It breathes, light bounces off, something. Snapping a photograph is like what the math professors call ‘differentiating’ an equation of motion—freezing that movement into the very small piece of time it takes the shutter to open and close. So we figured—if shooting a photo is like taking a first derivative, then maybe we could find some way to do the reverse of that, start with the still photo and integrate it, recover its complete primitive and release it back into action.

What I stump’d my bare reading toe over, cobbler’s tools in bib-pocket, leather lasts in ten gallon hat: the shed Counterfly enters. Here’s a kind of book-review Pynchonesque inventory, soup’d up Popular Mechanics-style, the tabloid lusts of boy-inventor Tom, tinges of self-mockery included!

Or, according to the browbeat culturist hubbub, a sort of “everything needed to assemble a Pynchon novel.” (That “half-used carbons” knocks a memory down, thinking, inexplicably, of carbon paper—where is it that somebody recalls a telephone conversation with the conversationally-excitable Pynchon wherein, referring to the enormous manuscript of Gravity’s Rainbow, he proudly offers up, “You know, I typed it myself.”)

And, too, a sense of how a novel and a poem’re found along something one ’d label the “discourse spectrum,” and if some “method” ’ll “work” for one, why not for the other? Building blocks remain building blocks, only “scale” changes—word, image, factoid, sentence, paragraph, anecdote, story—all “blocks” to pile into an untoppleable structure, why not? So the Bounce: “Any case, electricity and light being pretty much the same thing, just slightly different stretches of the spectrum really, we figured if we could work this integration effect with electricity, then we should also be able to do it using light, should we not?” Pynchon:

. . . with Roswell there was his strikingly advanced case of paranoia querelans [sic elsewhere “querulans” a.k.a. litigious paranoia] to be taken into account. You could see his ears twitching, always a sure sign in him of mental activity, but his mind was not, it had occurred already to Merle, working in anything like a straightforward manner. Fragments of former patent applications, modulated by defectively remembered court appearances, bloomed and streamed kaleidoscopically in and out of his attention. Faces of lawyers he had grown less than fond of, indeed entertained phantasies about murdering, even from years before, swam now distortedly through his thoughts. Not to mention inspiration to be drawn, not always explicably, from the pieces of hardware that kept finding their ways, more or less legally, into the shop. One of the pair of mad inventors would ask, “What the hell we ever gonna do with that,” the other would shrug and say, “You never know,” and up it would go onto some shelf or into some cabinet, and sure enough, one day they’d need something that would turn infrared light to electricity, or double-refract it at a particular angle of polarization, and there, invisible under a pile of stuff accumulated since, would be the very item.

Misguided the demand for a lessening of narrative strands, a simplifying. Misguided, too, the call for more “robust” characters—as if the point of fictioneering were to offer up a few new people in one’s live to weep with, or for. Plenty enough to weep about as it is . . .

Reading about William James, whose father “so despised ‘the subjective element in us, the personal element,’ that he thought we needed to ‘defecate ourselves of private or subjective ambitions’ because ‘the subjective element (the me) is a purely phenomenal or waste element in consciousness.’” (Too, “God is the only being in the universe.”) James, naturally, reject’d all that, and turn’d to peppering ’s letters and conversation with words like “conversash” (conversation), “suspish” (suspicion), “condish” (condition). Too, he call’d an acquaintance “the very Poetry of general imbecility.” And wrote that “Spring is whanging through the fertile country of Bohemia in fine style.”