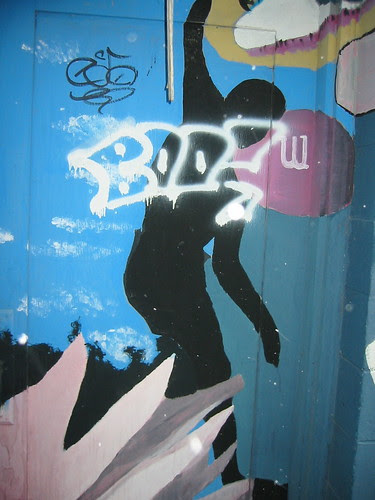 Cold enough the bicycle brakes freeze up—I slip through interstices of traffic. Post-work dribbles of energy yesterday sopped up by what—a moist towelette of reading? Against the Day nearly done—something of Shakespearean comedy in the odd couplings, the sortings out, all’s well enough that ends well enough. Wry acceptance in the anarchistickal households. End of the T. E. Hulme-ish-ness: “That fringe of cinders which bounds any ecstasy.” (Or, “Smoothness. I hate it.”)

William James: “Whosoever feels his experience to be something substitutional even while he has it, may be said to have an experience that reaches beyond itself. From inside of its own entity it says ‘more,’ and postulates reality existing elsewhere. For the transcendentalist, who holds knowing to consist in a salto mortale across an ‘epistemological chasm,’ such an idea presents no difficulty . . .” And Pynchon vociferating a notion of sleep’s ‘little death,’ the topsy-turvy side being death’s ‘big sleep,’—sleep nevertheless. “Back soon, and refreshed.” Question of scale. Longish nap and return. Writing—a writing life—encourages that “substitutional” thinking. The mortal leap of metaphor. ‘Knowing’ meaningless without ‘relation’—that grappling hook heaving its taut line behind, straddling the chasm.

What’s Ron Silliman going off about—I mean, beyond the usual laughably inapt hyperbole that offers no critical toehold beyond a kind of preen of hyperventilating, with that—“If, in fact, this is the only work that Fagin has published in over a decade, it should be in The New Yorker, damnit.” Hunh? I thought The New Yorker ’s part of the cootie-crowd, insupportable. Is it that Silliman actually aims, desires, yearns to “place” a poem therein—something for the ideologically intestate masses of Westport, Connecticut and environs? Or is it a backhanded slap at the new prose poems of Larry Fagin and the terrific new magazine The Sienese Shredder? Nah. Just more incoherent wild gesticulating by Silliman, uneasy with anything “New York,” and unable to critically react without a template in place.