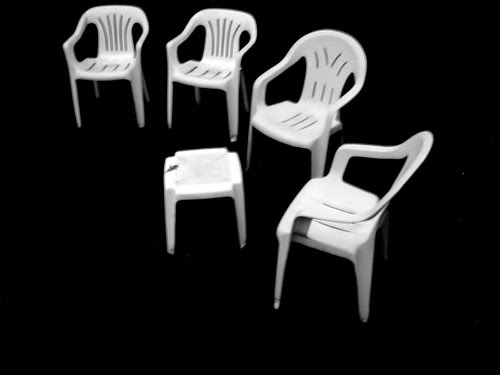 
Content mops its brow
And lunges into
Form, a perfect ar-

Rangement. Contends with
Expediency
With no exertion

Whatsoever. If
What matters least is
Occasion for such

Mutability,
How a kiwi looks
On the shiny lid

As any athlete—
A heedless batter
With enough clout to

Is about all I got down on the yester-eve of my morn. Tough to juggle the demands of song (it is song) with the spatula’d slap of domesticity and “all.” I like the way Moore niggles the syllabics, no contusion, no throaty outpour, no floody dumbshow

vernaculars. I keep thinking of an ink drawing by Mu Qi (c. 1200-1200), “Six Persimmons”—how arrangement doubles with something like grace, pinpointing a momentary stilling of the ever-grinding flux. One looks to Giorgio Morandi’s countless “Natura

Morta”—vases and bottles and pots, all “of the earth”—for a similar quelling of the visible. How opposed it is to a contortionist sense of form, “wild.” (Rexroth, who gets it right: “Then as now, most advance-guard writing was in fact amateurish

corn.”) Though: “The imagists writing in English owe their beginning to the French symbolists. We see this primarily in their loathing for the cliché, for rhetoric and pretentiousness, for oratory, that glib style used by Victor Hugo’s imitators (in

English, Swinburne, Tennyson, and Thompson) who have always repelled us. According to their constant rule, they seek precision of language, sharpness of vision, and compressed thought from which they like to draw a prevailing image.” That’s Remy de

Gourmont, in 1915, reiterating Pound. How (I ask myself, who is always talking) jibe the love of precision and the love of the profligate and messy rootings-about? Damp down the flares of one’s shoutings with the grid’d scrim of syllable-counting?