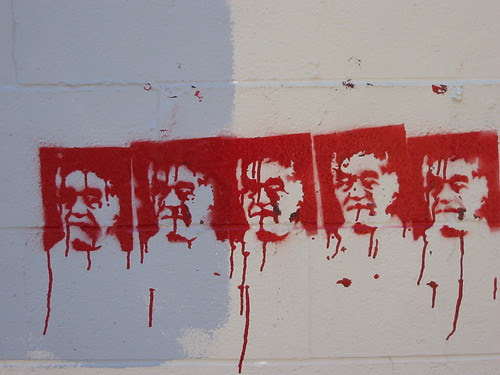 This omnivorous appetite for reading things in sets and subjects stood me in good stead, because it meant that I got most of the world’s important fiction out of the way in adolescence where it belongs. I would take the Constance Garnett Chekhov, Turgenev, or Dostoyevsky, the Archer Ibsen (a dreadful translation), the New York edition of Henry James, or the mail-order sets of Joseph Conrad and Jack London, start with Volume I, and read straight through. I’m not proud of this. It seems to me now to be more or less a substitute for nail-biting.

Amusing to see Kent Johnson’s query regarding the purported split in Flarfsville between the rancorous party militants and the jig’s-up accommodationists—those pufferfish who live by mutual puffery, die by mutual puffery. My only question: how’s it going to be possible to slice that teensy wedge of pie any smaller? No particular voluntary or involuntary “ability” is required to see that flarfismo’s a one-trick pony with all the derring-do of a fart in a crowded elevator. Even human corpses’re known to emit the piggish oink-tremoloes of long escaping gas. And joiners? always the avidest ones to join? Why, they’re the avidest ones to bar the doors of whatever flophouse they finally heap up in—and then the ornery neighbor-biting begins . . .

Cold, and a solid-looking hard blue bank of clouds to the north, ladled over in the heights with peach. Biking with a headband and gloves, thinking about Mt. Tamalpais and Pound’s “Mt. Taishan” off beyond the Monte Pisano, Pound thinking he’s in China, like the crabby hermit Han Shan. I confuse the two mountains. Impossible to de-bug the wires going into and out of the brainpan (a kind of deep fryer) and my concern lately: all the surges and counter-surges lost. I shoot down the flat stretch by Fingerle’s (a lumber yard) and one nigh-bolt asks: “What about Indiana? Why the odd radical energy there, Wabash-sluiced?” Marguerite Young: “In an impolite world of things as they are, in the early nineteenth century, an Indian prophet arose—even on the banks of the Wabash—Lolawawchicka [“Loud Voice”], the Indian Patrick Henry. If they did not hang together, they would all hang separately, Lolawawchicka said, a little belatedly. He proposed to establish a community of Indians in the Wabash valley, where the problem should be the Indian as an end in himself, rationally considered.” And all the utopianists she writes about in Angel in the Forest, Frederick Rapp and Robert Owen and, later, Eugene V. Debs, of Terre Haute. And Gene Stratton-Porter’s terrific Girl of the Limberlost. Inchoate zingers, fraught with little more than conviction, that’s the brain-swell today. Snow crazy in the air now.