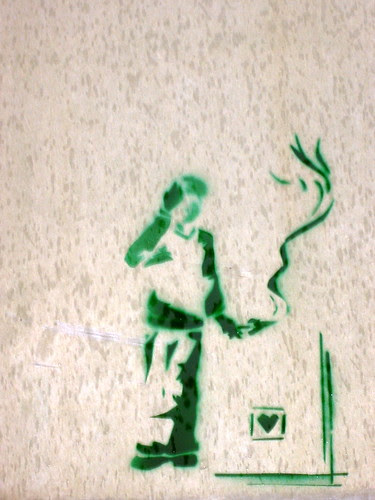 Bah. The weekend bolt’d like a Burpee. Scant exfoliate and everything’s cow-nettles. Bah. I tossed white marigolds into mud-colored waters in three port cities, sung out in prophetic nasality a song of the blow. Sarcophagi dumped in the plain of mulleins. Hellenic unearthings amongst the mock-adders, the asters, the stalks.

A messianic pottle in twelve acres of mustard greens. Romantic dither. Try, une fois, to say it straight. None of the putti-talk, chubby galas of mirth for one. (You are not “clubbable” is what the good Doctor’d mutter, awash in slips and quotations.) It comes a day when I see I am off-track and unwoo-ably reading a dozen

books, switching and baiting, dissatisfying so. Implacable romps in the word-hoard, pliable as a fish. Rexroth (a return): “A large percentage of the most talented people I have ever known have vanished, and I think the reason for this is that to be a successful poet or painter or a musician you’ve got to be a kind of fool,

you’re got to want to. You always arrive on an ass and the foal of an ass. Persistence as an artist seems to require a kind of folly.” Who is Rexroth talking about, one Olaf Olson a.k.a. Olivier Olssen, and Ole Olson, “a farm boy from Green Bay, Wisconsin,” published in The Dial, met Carl Van Vechten and Muriel

Draper and was “given brief immortality in Peter Whiffle and The Blind Bow-Boy.” Bah. Everything impinges on (converges into) the hermetic. Code-talk. Amusing to read in Benjamin’s On Hashish, a chapter titled “Crock Notes”—“There is no more valid legitimation of crock than the consciousness of having suddenly

penetrated, with its help, that most hidden, generally most inaccessible world of surfaces which is constituted by the ornament.” And if one reads the note regarding “crock,” one suddenly penetrates its inaccessibility (quoting Jean Selz, who got crock’d with Benjamin on Ibiza in 1933): “There is no word ‘crock’ in

German . . . What was actually involved was a slightly Germanized form of the French croc, ‘hook.’ Of course, the meaning we gave to the word had nothing to do with this. At once absurd and secret, it was the term we used to refer to opium. Some friends who smoked had invented the expression; I got it from them

and shared it with Benjamin. We didn’t know exactly how this special usage of the term arose. It is conceivable that it originated in sympathy with the humorous vocabulary of Père Ubu (in Alfred Jarry’s play Ubu Rois) who speaks frequently of his ‘croc à phynances.’” I knew a girl who used to leave notes

for “Corinne”—is Corinne going to New York, is Corinne coming back, is Corinne out of town? All Burpee-talk, code and lingual feints. If the world be “constituted by ornament”—all surface—what better than to invent one’s own cabal of gists and piths, or a Scandinavian called Olivier? And so art, seeking autonomy, withdraws to

the interior, all codework and crank, a private language—and so the ornamental outside world invades in perpetuity, its perps and pranks borrow’d off art and nobody else. A story of art’s exceptionalist flailings written by a crank. Or Adorno: “The dialectical critic of culture must both participate in culture and not

participate. Only then does he do justice to his object and to himself.” 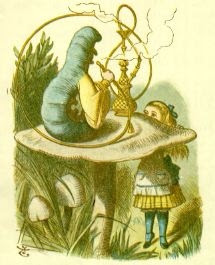 John Tenniel, “Alice in Wonderland: Advice from a Caterpillar,” c. 1865