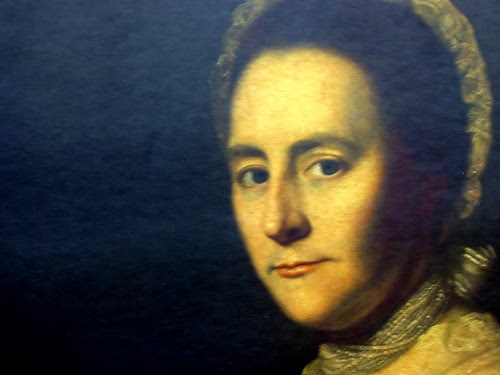 Thomas Gardner’s got a terrific-looking new book out—A Door Ajar: Contemporary Writers and Emily Dickinson (Oxford University Press, 2006). In it, he offers substantial interviews with Housekeeping author Marilynne Robinson, Charles Wright, Susan Howe, and Jorie Graham, claiming that they (among others) enact “for themselves, in their own terms, some aspect of the broken responsiveness before a world that can no longer be held in place that Dickinson puts into play.” He writes:

Susan Howe speaks of this as Dickinson’s “antinomian strain,” Charles Wright as her “negative spirituality,” and Marilynne Robinson as the way a Dickinson metaphor deliberately “ruptures the illusion that it has created.”

The unspeakable and irremediable gap between, say, world and God, that Dickinson’s style points at, widen’d to include a variety of writerly responses to the world using the primitive tool of language. As Gardner writes: “fragmentation, discontinuity, use of pauses, shifting styles, bodily language, instability, opacity, wandering and loneliness, dread, uncertainty, silence, disorientation are equally, often simultaneously, explored as nontotalizing responses to what can never be grasped.”

A compelling defense of the lyric (reminding me somewhat of Nathaniel Mackey’s talk about ghost limbs) comes up in conversation between Gardner and Wright:

TG: In an interview, you said that “The true genius of poetry is lyric and imagistic. It lies in concision and allusion, something withheld but partially glimpsed.” It strikes me that your notion of lyric form is quite close to the view of the world in “There’s a certain Slant of light” or in . . .

CW: Well, yes. It’s certainly no news to the world that things partially seen are almost always stronger than things completely seen, because you get to do the imagining yourself, to make them complete in the way that you want to. I suppose this all goes back to Sappho, bless her heart, who was the first to stop writing two-hundred-page poems and wrote these little lyrics. As we have them now, they’re partially seen because they’ve been lost. One wonders if part of that aspect of the lyric was accidental and that’s how we got it and made an aesthetic of it, or whether the aesthetic was already there and she slipped beautifully into it once she was resurrected and reinstalled. The idea of something missing, I mean, being part of the lyric aesthetic.

I don’t know. For me, since I am unable to do real narrative, the associative lyric has always been the one form that I felt, if not at home with, at least on the same block with. I have worked in it constantly, and have either expanded it or condensed it to my own ends. But I think what you said was true—that the form seems to imply the glimpsed thing, which then becomes more fully formed than the seen thing would in, say, the sonnet which, in its heyday, mirrored a complete statement, an argument, an entity. It gave you a narrative that started and finished beautifully, whereas in the lyric, even if it starts and finishes beautifully, the argument is never fulfilled. At least the lyric as I use it, or it uses me. It always has that incompleteness which I feel is necessary to art—that almost completeness, but kept apart right at the end so that you can make the synapse yourself without the argument being made. Which isn’t to say, of course, that the sonnet is not “lyric.” But a good one is always tied up, isn’t it? At the end, I mean.

And, because it is everything, and I trust no writer who’d argue differently, I repeat a couple things about music. Wright: “No one wants to say any of this, because we all want to be so meaningful, but in fact, the music drives an awful lot of these engines.” And:

Critics, for the most part, only talk about the meaning, the content. Naturally—that’s what’s there. But often, though they don’t admit it, poets come at it from a different angle. I think I come at it from a musical one, a sound pattern, and then the other stuff—since my subject matter is an obsession—falls into place, or doesn’t fall into place. I never approach it from the title of a poem—I never start it that way. It comes from something else. It usually comes from something I’ve seen, or some sound pattern that will come into my head. I used to write down nonsense words with a pattern, a line pattern, I liked and then figure out what I was trying to say after that. (Laughter.) I’m not sure that’s a good idea, but that’s how I do it sometimes.

And, a snippet out of Susan Howe’s (brilliant) interview, where she, too, puts “sound” (and “the sight of words”—evoking in me thoughts of a whole ongoing battle against words I find too unsightly to use, and strive to avoid: “his” is one, “upon” is another) first:

“Providence has a wild, rough, incalculable road to its end,” Emerson wonderfully wrote in “Fate,” “and it is of no use to whitewash its huge mixed instrumentalities.” The lyric mystery of poetry includes sound and surprise. Chance or Fate are words for an undeciphered form still unknown to us. It’s the sense that particular words are electrically connected through meter and melody. Poems are intentional and intuitive at once. The interest is in the spirit of execution. The spirit of execution is a spirit of experiment, an openness to order which chance creates. Though you think you have control as your write—
. . .

Emerson’s “mixed instrumentalities” are connected or conducted through particulars. That’s one reason I’m drawn to the pragmatist thought that truth consists in the process—in gathering and locating—in making connections and transitions. Poetry is the path of rhetoric to logic. Each sensible sound is a sign that awakens the condition for understanding. A poet surrenders with discipline to the beauty of the sound and sight of words at once. As if they are visually concrete and tangibly audible. “Affection” is the passion of a mind bent on a particular object but without its actual presence. The word stands in for the object. So the words you choose must be perfect.

Pickwick was beyond me when it came to plot but I loved his enjoyment of the names of characters and their ridiculous escapades: Samuel Pickwick, Esq., Mr. Winkle, Alfred Jingle, Count Smorltork, Job Trotter, Mr. Stiggins, Miss Wardle. Talk of relation and compression—of jolt and unexpected sallies.

“Poet, Sir?”
“My friend Mr. Snodgrass has a strong poetic turn,” said Mr. Pickwick.
“So have I,” said the stranger. “Epic poem,—ten thousand lines—revolution of July—composed it on the spot—Mars by day, Apollo by night,—bang the field piece, twang the lyre.”